I’ve been keeping an eye on “Ralph” (anomalous low pressure at the Pole).  For a time he sagged south towards Siberia, (though often bulging further north than usual), and things seemed more or less typical, with the Beaufort high pressure establishing itself towards Alaska.

If course, as soon as you say “more or less typical” you tend to drop your guard, especially on the July 4 holiday, and that’s when you get sucker punched in the jaw. During the holiday  the Siberian low shot across the Pole and knocked the Beaufort High right off the map. A second Siberian low formed, with a feeder band of milder air moving up its east side from the sun-baked steppes and tundra of Central Siberia.

A “zipper” formed on the warm front. over the New Siberian Islands on the east side of the Laptev Sea. 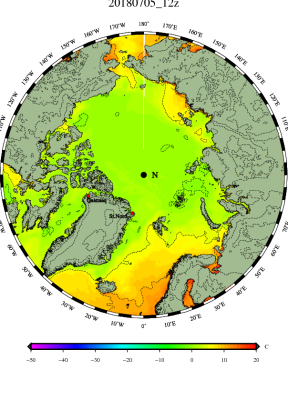 Rather than drifting east it curled north, drawing mild air as a feeder band, holding some modified Pacific air.

On the seventh day of the seventh month, it began blowing up, as the seventh summer storm since I began counting, back when we had the storm in the summer of 2012 that got so much attention.

If you remember, the 2012 storm generated all sorts of attention because it melted a lot of ice swiftly. Alarmists were overjoyed. Apparently the water had stratified and there was a slightly warmer layer of water below the “lens” of colder water at the surface. The reason the slightly warmer water didn’t rise was because it was saltier. Then the storm churned the water, and the milder water got into the mix. The speed at which the sea-ice vanished was quite remarkable. However then the  milder water was “used up”, and the stratification ceased to be. This, along with  (perhaps) the cooling of the water because it was initially exposed to arctic blasts the next winter, seemed to make the water so much colder that,  when a similar gale blew up in 2013, what was remarkable was how little of the sea-ice melted. (It was also remarkable how crestfallen certain Alarmists were.)

The 2012 storm was described as “very rare”, and a “top five storm”.  I’m not sure who was keeping the records, but if it was unusual, than the unusual is becoming more usual, for this makes the seventh top five storm we’ve had in seven years. We had two last summer, and this is the second we’ve had already, this summer. Ralph is on the rampage.

All eyes will be watching to see what sort of effect this storm will have on the sea-ice. Will it be like 2012 or like 2013?

The sea-ice remains thicker than last year. The “volume” always falls steeply during the peak of the melt, and this year has slipped below 2014, but remains far above last year’s. 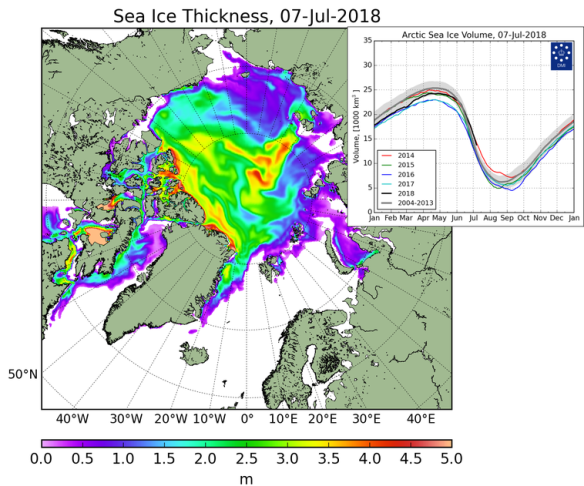 The sea-ice “extent” has not fallen as steeply as last year. All eyes wait to see if the storm causes a downturn.

Despite the “feeder bands” of milder air Ralph draws up to the Pole, temperatures remain below normal.

As was the case with the storm in early June, the flip of the pattern has swung the cross-polar-flow completely around, to a flow from the Atlantic to the Pacific. (Dr. Ryan Maue map from Weatherbell) 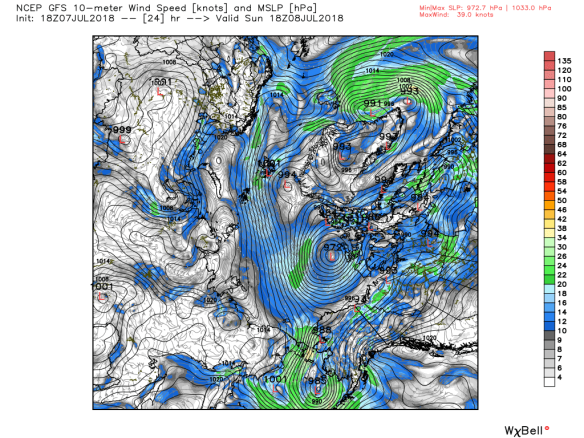 This flow prevents the flushing of sea-ice down into the Atlantic, (a major reason for the low sea-ice “extent” in 2007). This inflow from the Atlantic looks likely to persist, as Ralph looks unlikely to surrender the Pole any time soon.

I should mention that, deprived of my addiction to views of sea-ice from floating cameras, I have turned to shipping reports in a sort of desperation. The lone American ice-breaker was down in San Diego. No sea-ice there, yet. However I think they are picking up scientists from Scripps. Hopefully those fellows bring a camera north and plant it on the ice.

The Russians have a whole different attitude. The built the world’s first icebreaker in 1897, and are determined to open the Northeast Passage, and replace the Suez Canal. They are building massive ships, veritable monsters.

How committed are the Russians? They have build forty of these monsters. This June they launched their biggest icebreaker yet. It will be able to smash through ice nine feet thick. Cost? Over a billion dollars!

What a gamble! So far the Russians are only escorting something like fifty ships a year, compared to thousands through the Suez Canal, but if they they can open the new sea-route it will be a change like Henry the Navigator  putting Portugal on the map by exploring the new route to India around Africa.

The hope is that once they bash channels open in the summer, the channels will remain open, and some reinforced boats can travel without escort. 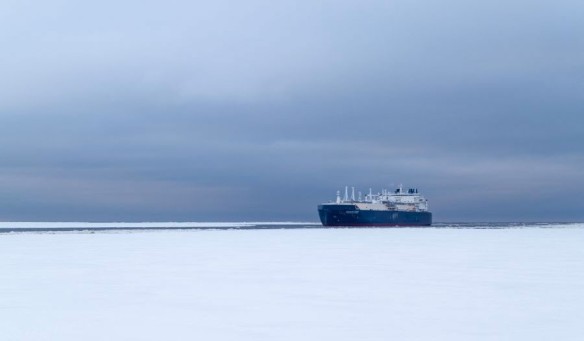 The gamble is, well, the arctic is the arctic. Ice can thicken and channels crunch shut. But the Russians have been battling the arctic for centuries. They alone have built off-shore rigs in the frozen sea, and had a terrific battle getting their tankers to load up the oil this spring, fighting this year’s thicker ice. 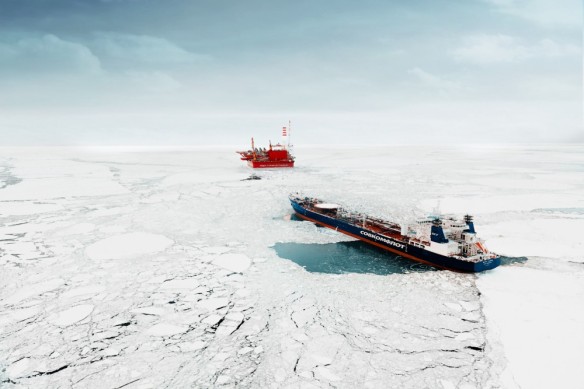 A typically insightful post by Susan Crockford. If this field of icebergs persist it seems likely to chill the SST in that part of the Atlantic. Watch to see if the cold water encourages high pressure of a “Newfoundland Wheel” sort. Joe Bastardi suggests high pressure to the north can lead to stronger hurricanes to the south.

Typically the media reports such a shift to the south of sea-ice as a loss of ice to the north. It seldom reports the chilling of the water to the south. Sea-ice can achieve such chilling where a cold current can’t, because a cold current, being denser than the milder water it moves into, tends to sink. Icebergs bob merrily onward, refusing to sink, and greatly chill the waters they move into. This can allow colder currents to move further south at the surface, because they are no longer moving into milder waters. I sometimes wonder if it is such a shift in a field of ice that causes a “flip” from a warm AMO to a cold one.

Heavy sea ice off Newfoundland and southern Labrador has been an issue for months: it brought record-breaking numbers of polar bear visitors onshore in early March and April and since then has hampered the efforts of fisherman to get out to sea.

Let’s look back in time at how the ice built up, from early January to today, using ice maps and charts I’ve downloaded from the Canadian Ice Service and news reports published over the last few months.

The tour is illuminating because it shows the development of the thick ice over time and shows how strong winds from a May storm combined with an extensive iceberg field contributed to the current situation.

Bottom line: I can only conclude that climate change researcher David Barber was grandstanding today when he told the media that global warming is to blame for Newfoundland’s record thick sea ice conditions this year. …

I do a fair amount of lurking about the web, learning what others are up to, and hopefully broadening my mind. Of course, at times my mind narrows, because I see some people are just learning, and to some degree are novices about certain subjects, and if I am not careful this allows my ego to become smug and condescending, which becomes a form of blindness. I give myself a slap, when I notice I’m becoming a prig. The reason to lurk is not to puff up ones own opinion, but to learn of other opinions.

One good way to avoid the traps of self-centeredness is to avoid words, and focus on pictures. I know I likely shouldn’t say words are a bad thing, as I am a writer, but at times I become all too aware of the problems inherent in words. (It is not without reason that Saint James called the human tongue the most evil organ of the body.)  Words hold all sorts of trickery, as our politicians make all too clear. Pictures, on the other hand, make trickery harder.  Even the evil geniuses of Madison Avenue often need to employ words and mood music, to make their pictures get us to buy what we neither want nor need.

In terms of sea-ice, satellite pictures tell no lies. It is how we interpret the pictures that causes confusion, and sometimes involves lies and liars. The pictures themselves are not to blame.

In any case, I sometimes like to just  wander about sites looking at pictures of sea-ice from ground level, and from way up in space, and to ignore all the voices that are attempting to tell me what I am seeing.  I have eyes. I can see for myself.

If you do use your own eyes, you occasionally spot things that are so intriguing that you feel a wonder worth sharing. These MODIS pictures are of that sort.

They show ice melting on the Great Lakes, by the Mackinac Bridge. 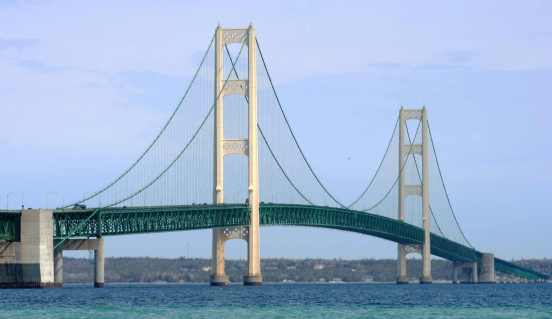 What is intriguing is that the first picture, from March 22, 2005, shows the ice solid, and the only open water as narrow channels made by ice-breakers.

The second picture shows the situation nearly three weeks later, on April 9, 2005, as the ice starts to break up. My common sense would assume that the first ice to break-up would be the channels made by ice-breakers. However the extraordinary thing is that those channels have become long lines of ice that is resisting the break-up.

This is so opposed to what I would have expected that it parks itself in my brain, as a wonder worth sharing.

The thing I have noticed is that, if you continue to use your eyes, these wonders add up. They gradually turn into a “body of evidence” which has the ability to keep you from being played for a fool, on occasions when our common sense makes assumptions that are wrong.

We don’t like to admit our common sense can be fooled, but it often is. One of the most common tricks, used by both politicians and Madison Avenue, involves flattery.  There is a child-like trust within humans that tends to feel that the person flattering us really does like us. It is a common sense that betrays us, and that we warn our daughters about, when they prefer a flashy-talking sailor, who only wants to use them, to a decent fellow who is clumsy with words.  However in Shakespeare’s tragedy “King Lear” we see the old king fooled by his two flattering daughters, and disdainful of his truly loving daughter, who doesn’t flatter. Age is no guarantee that flattery won’t make a fool of us.

In conclusion: Avoid flattery, and allot some time for lurking.  Keep your lips buttoned and your eyes open, and who knows what wonders may be revealed?

Silence is golden, when your eyes still see.