Here is another fragment cut from a prior “Arctic Sea Ice” post. (Those posts are a notebook full of observations and doodles, and can be too long-winded for some.)

What I have been noticing, but don’t see at the moment, is how cold it has been up at the North Pole this past summer. It is gloomy, as it has been all summer, but the -10°C temperatures we saw a few days ago have vanished, as a recent probe of warm air now spears the Pole.

You don’t really notice the cold unless you have been a long-term escapist like me, and watched sea-ice for years. It doesn’t show up all that well in the Mean-temperatures-north-of-80°-latitude DMI graph, (though the recent mild invasion shows up).

However the unexpected cold air showed up all summer, especially south of 80° over towards O-buoys 10, 11, and 12. Look at my old posts if you don’t believe me. And, as a bumpkin ruled by common sense rather than science, one thing I am highly suspicious of is the simple fact there have been so few sunspots at a time there should be a lot. So forgive me if I blare a headline:

If you squint at this image you may see some itty-bitty spots at the equator to the left, but they don’t count, because in the old days a small telescope could never get an image this good. They are “sun-specks”, and scientists use them to become confused. The simple fact of the matter is that they would not be seen in the old days, and if you want to compare apples with apples you shouldn’t count them, when comparing the present to the past . And, while you might not agree with the host’s ideas about planets influencing the sun, an excellent “layman’s sunspot count” cam be found here:  http://www.landscheidt.info/?q=node/50

I bring this up because, in the past, when sunspots became few and far between, the earth got cold. Modern science can’t grasp the reason, and some conclude it was therefore “just a coincidence.” This is a bit like saying it is just a coincidence that your thumb hurts when you hammer it, because you can’t scientifically prove how nerves get the message to the brain. Just because you don’t know how a thing happens is not proof it isn’t happening.

Once again lying eyes come in handy. If you stay indoors by a computer, at least visit sites that look out windows. Then maybe you will witness the thawing Beaufort Sea refreezing all summer, when it should be thawing without interruption.

Anyway, here is a graph from the above-mentioned site, comparing our current lack of sunspots with the year 1798.

It sure does look like we are seeing, if anything, fewer sunspots than 1798. Is this a hint it may get colder? From scientists all I hear is a lot of, “there is not enough evidence to verify for certain, and therefore…” Then a lot of them use even less evidence to verify that it is getting warmer.

One of the biggest flips from warm to cold (and from cold to warm) involves the Atlantic Ocean, and something called the AMO, (Atlantic Decadal Oscillation). When it flips there is a huge migration of all sorts of sea creatures, and in the past it was primarily noticed by bumpkin fishermen whose livelihood depended upon finding where the fish schooled.  There are great stories of fishermen finding fishing grounds deserted, searching far and wide, and discovering the fish hundreds of miles north or south of where they once were. Only recently have scientists started to become interested in what was a matter of life and death for fishermen, and in a rather snooty manner some of these scientists tend to think they know more than mere fishermen.

Only in my lifetime was it determined that what fishermen knew is factual; the AMO does flip from “cold” to “warm” and back, though why, when and where it happens is still argued about. The AMO has been “warm” for a while, and some say it is likely to turn “cold”, but the data scientists use only show it is wavering on the verge, like a top wobblng at the end of a spin.

This is too wishy-washy to be an answer, and therefore a person who resorts to lying eyes must resort to people who actually leave their computers and walk the beaches, and even get in the water to swim and surf. They are the ones likely to see something unusual. (Cue for next sensational headline:)

For many years the Bowhead whale was just another “Right Whale”,  so named because they were the right whale to hunt, primarily because they didn’t sink when they died. They are now known to be quite different from Right Whales, and a truly arctic species. For one thing, they have heads that can butt through ice two feet thick, and for another thing, when threatened they use ice as a hiding place to flee beneath.

There was good money to be made hunting these whales, and many of our earliest records of sea-ice were from the voyages of daring men who risked their lives in the arctic. Some were my ancestors, and I’m proud of their daring, but less proud of their greed, which reduced the population of these whales from 50,000 to roughly 5,000. In fact, were it not for the discovery of fossil oil in the earth, these beautiful creatures might be extinct, however their population has increased to at least 30,000, if not to their their original levels. Now they are only hunted by Eskimo. 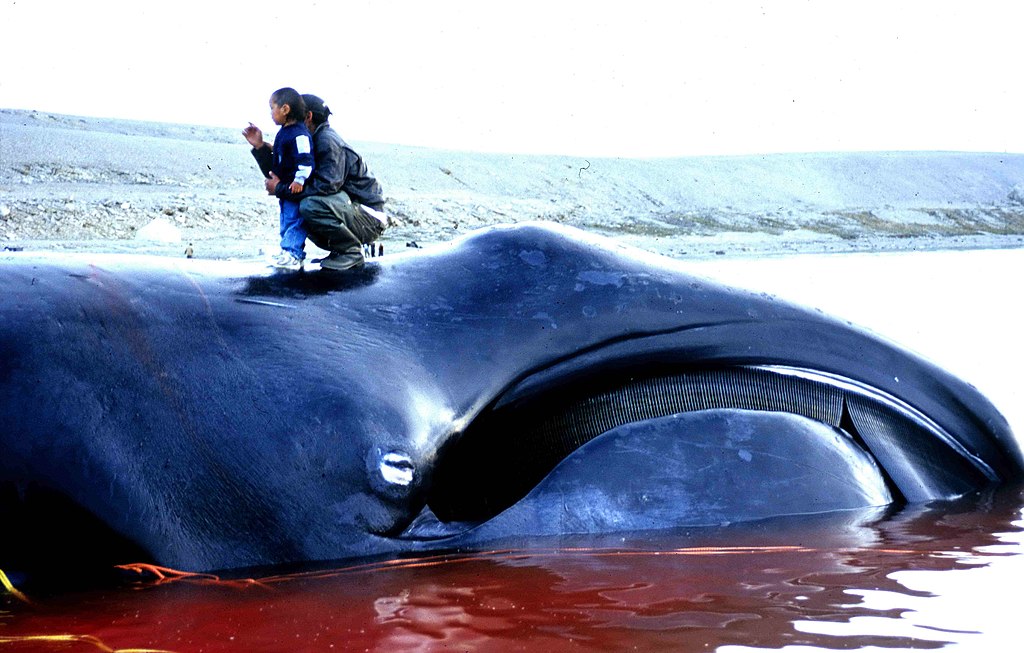 During the recent harvests, only 20-30 per year, of these whales, very old harpoon tips have been found in the blubber. Some are of slate, or basically “stone-age”, and an unexploded exploding harpoon from New Bedford in the 1890’s was also found, suggesting these whales can live up to (and perhaps over) 200 years.

Therefore I sat up in interest when off the coast of Britain, where such whales had never, I repeat, NEVER, been seen before, this picture appeared for lying eyes:

Some may say it was a fluke, a young male Bowhead only 99 years old out gallivanting far from home. But that is not the only whale far from home.

Another arctic species is the Beluga Whale, which are pure white when adult, because it helps them to camouflage themselves with sea ice, when hunted by polar bears who are also camouflaged, and by killer whales. They can only break through 3 inches of ice, but will trail bowhead whales, using the holes bowhead’s break through 2 feet of ice. They are the only white whale besides Moby Dick, and are extremely obvious when away from sea ice.

Once again we turn to not scientists, but the ordinary folk in Britain. Off Northern Ireland on July 30:

And then at the end of August two more were spotted in the North Sea off Northumberland.

It should be noted that there are only 17 recorded sightings of Beluga Whales off the coast of Britain, most off the Scottish coast, and none before this summer’s (that I know of) from the coast of Ireland. So, as was the case with the Polar Bears, I wonder if the animals know more than our scientists. And once again it is not scientists who give us the really interesting pictures, despite all their grants and hours spent by computers, but rather it is ordinary people who go outside and use their lying eyes.

(A hat-tip to http://iceagenow.info/ which is a great source of links to gain information such as the above news about whales.)