The people of New Zealand will be surprised to learn of Moa in New Hampshire, and I can only explain my discovery by stating that the older captains of ships tend to be an eccentric lot, and, in order to prove that the tales they told of exotic creatures in foreign lands were not creations of their own fancy, they would bring specimens home with them.

Critics will say it was impossible for Moa to be brought to New Hampshire, as the Moa went extinct before the English arrived in either New Hampshire or New Zealand. To that I say, “Get off your high horse, Englishman.” (I am for the most part English, by the way.)

White, English men are hogging far too much of the blame these days, taking all the credit for all bad things that ever happened. It is unfair. Don’t other people ever get to feel guilty about anything?

The extinction of the Moa is one thing the English cannot take credit for (so far.) It apparently was entirely the result of the indigenous people, the Maori. They apparently arrived in New Zealand around 1280, and slaughtered all eleven species of New Zealand’s huge birds in as little as a hundred years. After all, when a man’s hungry, he’s hungry. 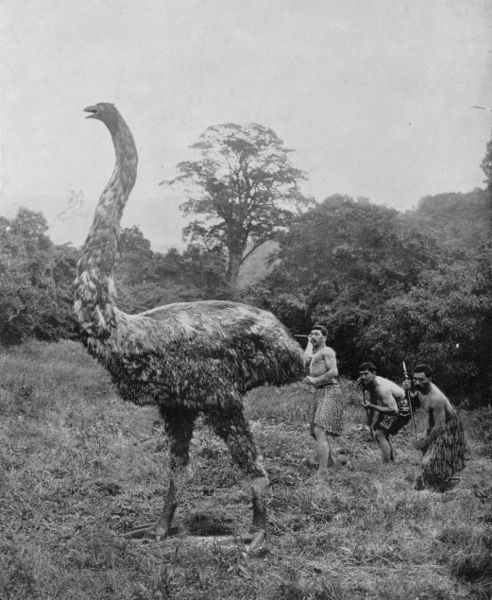 The next question is, how did the huge birds get to New Hampshire? The answer is obvious. Who transported huge animals in the 1300’s? It had to be the Chinese,  who built huge ships and may have transported enormous giraffe to China as early as the 1200’s, and certainly did so in the 1300’s.

The first settlers of Boston reported a huge rotted hulk of a ship across the Charles River from Boston Neck, “The Somerville Hulk”, which they supposed was Spanish because it was so much larger than any English or Dutch ship of that time. I assert it was a huge Chinese junk full of refugees that landed in the 1400’s, containing, among other oddities, some Moa. It is the Chinese influence that explains why the Massachusetts tribe was different from surrounding tribes, more prosperous and thickly settled, and also may genetically explain why they were so much more susceptible to the great pandemic of 1618.

When 20,000 Massachusetts died of the pandemic, and then 20,000 Puritans arrived to replace them in the next 20 years, the people in charge of the Moa fled to the hills of New Hampshire. Moa have been hiding in our hills ever since, the carefully guarded secret of locals who do not trust “flatlanders”, but the recent heavy rains of Hurricane Florence caused some Moa to be driven out of their normal habitat, and I found evidence of late season nesting at my Childcare. 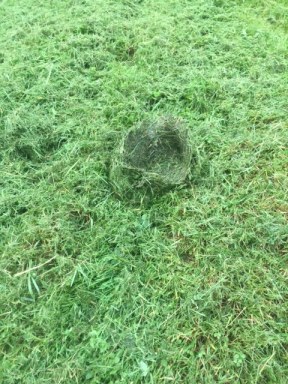 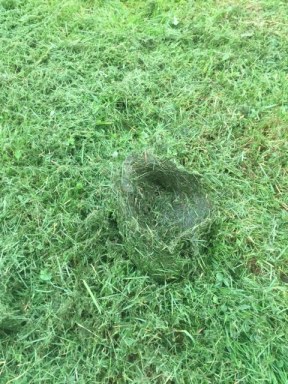 These are nests of one of the smaller species, called the “Lawn Moa”.

Now I just need to convince my wife this grass is the protected habitat of an endangered species, and I should not cut it any more.