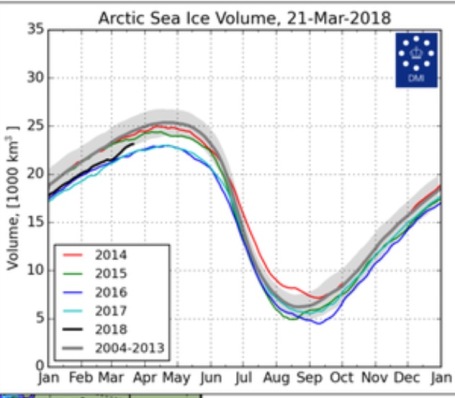 The coast of Newfoundland is an excellent example, this year, of how the sea-ice”extent” graph can decrease even as the “volume” graph increases. In the middle of February the sea-ice had spread far from the coast, to the cross-hairs formed by the 50° W longitude and 50° N latitude lines.

However a month later we see that the area the ice covered has shrunk back to the west.

Initially one might think the decrease in extent was due to melting, but then we notice how thick the ice is along the Newfoundland coast. What has happened is that a series of nor’easters, which gave headline-making snows in the northeast of the USA, created persistent east winds to the waters off Newfoundland, pushing all the ice towards the shore, where it piled up. In actual fact the “volume” of this particular bunch of ice likely was roughly the same, but the “extent” was greatly reduced.

When the sea-ice piled up to such a degree it became a problem. Or actually a number of problems.

The first problem was that boats up in those waters are built to handle ordinary sea-ice, which tends to be a foot or two thick, and a bit slushy in its consistency.  It is not the same thing as the huge and beautiful icebergs that drift down to those coasts after calving off massive glaciers up in Greenland. It is sea-ice a boat can motor through. But when east winds persist the ice piles up thicker and thicker, and this year reached thicknesses approaching thirty feet. At that point the smaller boats became stuck, and a few even were sunk, and icebreakers and helicopters need to be called to the rescue.

This creates a second problem. Certain climate scientists have been warning that all the sea-ice was melting away and polar bears would have no ice to stand on, and would drown. To have ice thirty feet thick along the shore placed these gentlemen in an embarrassing situation. Like a boy with undone homework standing in front of an Algebra teacher, they needed to think, and think fast.

I must give the fellows credit. If they were standing before an Algebra teacher, their excuses would cause the entire class to rise and give them a standing ovation.

Basically their excuse was that less ice made for looser ice, that was more able to shift and crunch up against the coast. In order to understand this lovely excuse you need to understand the concept of “fast-ice.”

Fast-ice is actually ice that is slow. It was so slow that it was “frozen fast” to the shore, where it can remain for years, during periods when the climate is cold. When the climate warms, large areas of fast-ice can break off. It is very different from “shelf-ice”, which is far thicker and derives its origins from glaciers. Fast-ice derives its origins from sea-ice, and is seldom thicker than thirty feet. Fast-ice bergs are far more crumbly than the huge bergs than can sink a Titanic,  for they are made of compacted chips of ice and slush, as opposed to glacial bergs, which are solid ice. A slab of fast-ice tend to quickly revert to many small chips of sea-ice, and a thirty foot thick slab can then spread out like butter over bread to cover a larger area with chunks of sea-ice, causing a confusing rise in “extent” even as weather warms.

In any case, the excuse now being given for the situation along the coast of Newfoundland gets double points, for not only does it explain the ice getting there, but also explains the larger chunks of sea-ice which are in the mix.

I hope you recognize the beauty of this  explanation. Now not only does Global Warming explain more sea-ice, but it also explains bigger chunks of ice in the sea-ice. Because bigger chunks may damage and even sink small boats, it becomes all the more important to raise carbon taxes on hard-working fishermen, and fund climate scientists.

But there is one small, third problem. We have the records of sailors going back into the past, and can look to see if indeed fast-ice held sea-ice to the north.

The route to the posts of the Hudson Bay Company in Hudson Bay tried to avoid the sea-ice that moves south down the west side of Baffin Bay and along the coast of Labrador, by sailing along the east side of Baffin Bay, but to enter Hudson Bay they had to cross over and penetrate the river of sea-ice. And when did these voyages start? Well, the “Nonesuch” sailed up there and then down to the very south of Hudson Bay in 1668, and founded the first post. So we have 350 years of records, showing that some years the passage was easy, and some years the passage was blocked.

“Oh, well”, you may say, “That only shows the passage was possible because the lack of Global Warming kept the thicker sea-ice trapped behind fast-ice to the north”.

But here we face a fourth problem. Besides traders after furs there were whalers after whales, and they sailed farther north. In fact, after what was likely an amazing discharge of sea-ice around 1816-1817, one whaler is even reported to have sailed up the east coast of Greenland, around the top, and down the west coast.

Also, besides the whalers, there was a whole slew of British explorers attempting to navigate and map the Northwest Passage in the first half of the 1800’s, and they quite routinely navigated through Baffin Bay.

Lastly, members of the ill-fated American “Polaris” expedition, after steaming up to the to the top of an open Nares Strait in 1871, became separated from the ship and were marooned on an ice flow at the bottom of Nares Strait in 1872. What better proof could you ask for (that the sea-ice was mobile) than to have a group of men ride it all the way south along the west coast of Baffin Bay and onward, over 1800 miles,  to where they were rescued off the coast of Newfoundland in late April 1873 by sealers.

All in all, judging from the sea-ice conditions reported in the past, I have to conclude the hypothesis that sea-ice has only recently come south, because Global Warming’s melting freed it, has been refuted. However I do give climate scientists an “A” for effort.

Perhaps there was more fast-ice during the Little Ice Age, but it seems the flow of sea-ice down the west side of Baffin Bay, and even through Nares Strait at the top of Baffin Bay, is a persistent geological reality, even in cold periods.   Perhaps it may briefly halt during an especially cold winter, but ice grinds south along the northeast coast of Greenland even when winds are at -40°, only rarely becoming fastened to the shore for a while, and I can see no reason Baffin Bay should differ.

Sadly, when reporters focus in on the trials and tribulations of the people up there, when east winds pile the sea-ice up along their coasts, the climate scientists hog the spotlight, and there is hardly any reporting of what the fishermen suffer. Is it only climate scientists who deserve pity?

It took some digging, but I did finally find news about the fishermen. 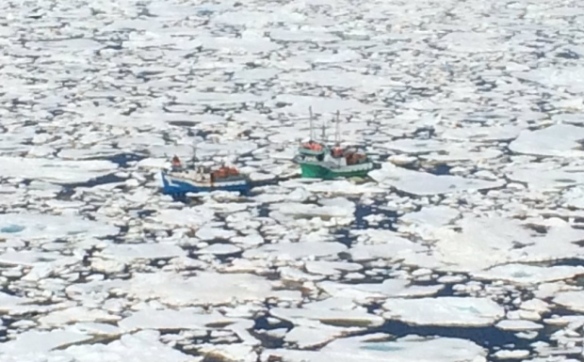 A typically insightful post by Susan Crockford. If this field of icebergs persist it seems likely to chill the SST in that part of the Atlantic. Watch to see if the cold water encourages high pressure of a “Newfoundland Wheel” sort. Joe Bastardi suggests high pressure to the north can lead to stronger hurricanes to the south.

Typically the media reports such a shift to the south of sea-ice as a loss of ice to the north. It seldom reports the chilling of the water to the south. Sea-ice can achieve such chilling where a cold current can’t, because a cold current, being denser than the milder water it moves into, tends to sink. Icebergs bob merrily onward, refusing to sink, and greatly chill the waters they move into. This can allow colder currents to move further south at the surface, because they are no longer moving into milder waters. I sometimes wonder if it is such a shift in a field of ice that causes a “flip” from a warm AMO to a cold one.

Heavy sea ice off Newfoundland and southern Labrador has been an issue for months: it brought record-breaking numbers of polar bear visitors onshore in early March and April and since then has hampered the efforts of fisherman to get out to sea.

Let’s look back in time at how the ice built up, from early January to today, using ice maps and charts I’ve downloaded from the Canadian Ice Service and news reports published over the last few months.

The tour is illuminating because it shows the development of the thick ice over time and shows how strong winds from a May storm combined with an extensive iceberg field contributed to the current situation.

Bottom line: I can only conclude that climate change researcher David Barber was grandstanding today when he told the media that global warming is to blame for Newfoundland’s record thick sea ice conditions this year. …