Photo Credit for picture below: Matthias Wietz. From: http://www.polarmicrobes.org/?p=106  (Ice in this picture is only 1/16th of an inch thick) 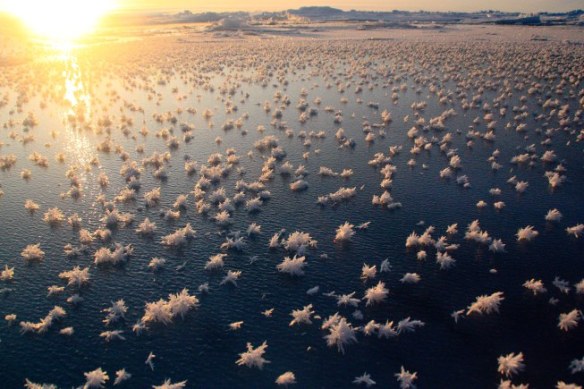 The above picture of “ice flowers” has given me a lot of pleasure, as, first, it is beautiful, and second, it illustrates the complexity of sea-ice, which is beautiful in its own right, even if it can give our small minds a headache.

In the above picture a lead has opened close to shore, and the sea is exposed to bitterly cold air that is flash-freezing it. The very thin ice is actually wet on the top, because as salt-water freezes it exudes salt, which then melts the ice it is closest to, forming brine. This wetness eventually is pulled downwards by gravity, forming channels down through the ice and even “brinicles”, as seen in the cool clip below:

These ice-flowers turn out to be suburb wicks.  They defy gravity, by sucking the brine up, and not allowing it to sink down. In some cases I suppose the brine promptly melts the ice-flower, but in other cases the brine is pulled up into a region, sometimes only a distance as thick as a sheet of cardboard, which is so much colder that salt loses its ability to melt ice. And at that point, rather than melting the ice-flower, the brine freezes, and becomes part of the ice flower. This can continue until the ice-flower holds two or three times as much salt as sea-water.

Meanwhile very dry winds start to blow by, and then the H2O in the ice-flower starts to “sublimate”, which means it skips the liquid phase, and turns from solid directly into gas. The wind also can crumble these ice flowers, and they wind up as dust in the wind. As the water in the dust sublimates the dust increasingly becomes a fine powder of sea-salt, drifting across the surface of the ice.

Back in the late 1970’s I lived on the coast of Maine during some very cold winters, and actually  witnessed such dust blowing over the flash-frozen waters of the tidal Harraseeket River. The sea-ice was actually black ice and smooth enough to skate upon, which I think is rare for sea-ice, and I saw white dust blowing across the black ice, and making cracks in the ice stand out, because the white dust collected in those cracks. I dabbed a finger down and then tentatively licked it. It was salt, all right. I suppose I was being remotely scientific, but I just thought I was curious, and never thought my observation might mean something all these years later.

It may mean many things, and even contribute to the dreaded “Ozone Holes” at the poles, as I explained in this old post (towards the end):

However one thing I didn’t consider in that old post is what it means when you have drifting salt along with your drifting snow.

If you have ever lived in the north during very cold winters you know there are times salt works and there are times it does nothing, when you cast it on an icy driveway. Below a certain temperature salt has no effect on ice. Zip zero. Zilch. At the Pole this means the salt can blow around with the snow as just another white substance, up until temperatures reach a certain point.

The past winter saw many more leads form, due to the meridenal winds and the formation of more leads and pressure ridges than occur in calmer and more zonal flows. This created more salt to blow around with the snow, but it also may have created more temperature spikes, where the salt could start to melt the snow. Such spikes are due to Atlantic, (and less often Pacific), air being sucked north, and also are caused by the exposed water itself, which is far warmer than the air and warms the air until it is lidded by new ice. However these spikes are short-lived.

Because of this the snow starts to melt but then refreezes as the temperatures plunge and the salt stops having the ability to make snow sticky. The result is a starchy sort of snow called “(Insert word when I remember it)” that adventurers actually prefer to drifted powder, as it is easier to ski across.

What I have not seen discussed is the effect that the salt has around now, when temperatures rise to a point where the salt starts to melt the snow.

I can think of two differences right off the bat. First, the pools of melt-water would be more salty when they formed, and more able to melt downwards. Second, as everyone who has made ice-cream knows, adding salt to crushed ice drops the temperature.

In other words, heat was added to the air during the winter, as the salt was removed from the water, and as the water went through the phase changes from liquid to solid. Now those processes are reversed, and heat may be subtracted from the air.

So far there are only a couple slight dips slowing the rise of temperatures, which may or may not be indicative of the above-mentioned cooling occurring.

I think it would be cool if the temperatures in the above graph dipped below the “green line”, because I could then suggest drifting salt contributed to the cooling. Sheer conjecture on my part, of course, but I always figure wondering is wonderful.

It would also be cool because, just as in some ways an El Nino is author-of-its-own-demise, creating a La Nina in the Pacific, it could be seen it was author-of-its-own-demise in the Arctic, by creating more drifting and blowing salt. (And this point might be driven home with especially keen poignancy if the cooling started in the Arctic before the Pacific changes could possibly get up to the Pole.)

(On the other hand, such cooling might be blamed on the “Quiet Sun”, rather than salt.)

In more mundane matters, the sea-ice extent continues to thrill Alarmists by being below-normal as it continues its yearly decline:

The maps show the conditions remain quiet at the Pole, with the high pressure refusing to budge much. 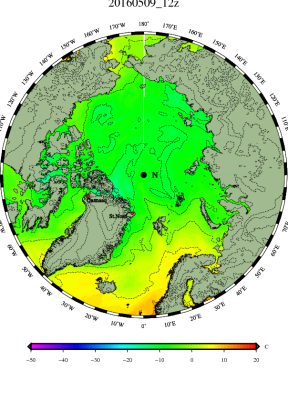 Things are changing, though all looks quiet, and the clearest sign of the change is that the poor people of Iceland are finally getting a break from low pressure that seemed it would never leave, and now are getting some genuine high pressure.

However my hunch is that the real change will not become obvious until later, in late July. Then it will come as a shock.

In the meantime the only sign is the many pressure ridges on the horizons of all pictures we’ve seen from up there.