With the election upon us there is good cause to be cautious, and nervous, and paranoid, about the possible consequences of this political cycle.

The Right is usually accused of being more prone to the behavior of a dictator, but this time around I have been dismayed by the Left’s behavior. Most dismaying was the disruption of Trump’s rallies by instigators of violence, apparently with the knowledge of both Hillary Clinton and the President.

Once violence is involved we are departing from civil procedure, and entering the barbaric landscape of despots. I have studied too much history to be naive about the inhumanity enacted in the name of “order”. The most appalling deed was, of course, the Crucifixion of Christ, but hundreds of millions of more ordinary mortals have been innocents slaughtered, and for what? For being honest. In Argentina the gruesome noun “the Disappeared” described college students taken in for questioning by the dictatorship, and never seen again. For the Left to be in any way, shape or form involved in such violence is completely opposed to its stated objectives, one of which was, (according to school systems),  “to reduce bullying”.

I have been subjected to a lot of bullying in my life, and have developed a number of responses. As an adult I simply speak the Truth to the bully, which usually doesn’t go over too well. I got fired from a lot of jobs. However as a result I have lived a life full of variety and interest, involving the flexibility of working over a hundred different jobs, in all sorts of interesting landscapes with all sorts of interesting people, while the bosses that fired me clung to offices that were little more than self-created dungeons.  I have seen a mansion can be a hell, as a hobo knows heaven.

I have seen a mansion be a man’s hell
Even as a homeless hobo tasted heaven.
(Those who worship money know all too well
Their bread is puffing due to evil levain.)

Blessed are the poor, who do not go in
The skyless places power places men;
Like one who’s never tasted heroin
They’re not dragged back to sin, to sin again.

But cursed is the man who blames the poor
And chains them onto oars of slavery,
Lusting that their lack will bring him more
And there’s no wisdom in men being free.

When power’s based on thieves who have no thanks
They build a ship of state with rotton planks.

I was lucky, in a sense, to grow up among overly wealthy people, and to see first hand that money cannot buy happiness.  It enabled me to skip a lot of the bother of becoming rich, and seeing the hell of wealth by earning it. Instead I could just enjoy a lesser life, which turns out to be richer, if you measure in ways other than money.  However I have seen enough to know I am one of the people who the worst of the bully’s hate. I know that, if situations soured, I could become one of the “Disappeared.”

This dynamic became obvious over a decade ago, when I first became involved in the Global Warming debate. At first the word “Denier” didn’t appear, and the debate was hot, but conducted in a way that involved relatively reasonable people utilizing civil procedure to discuss the various facets of a complex issue. As time passed the “Alarmists” started to lose more and more arguments,  and began resorting to bullying. That was when, rather than a “Skeptic”, I started to be called a “Denier”. More recently the degradation of my honesty has involved more serious threats, including the suggestion I should lose my right to speak publicly, and even to vote, (only the nuts say I should be shot).

This bullying does make me wonder if I was wise to speak the truth. It adds to my nervousness, regarding the current election cycle. And it also activates a second way I have of dealing with bullies, that I learned when I was much smaller than the bullies were, and (usually) too smart to speak back to them.

What I did was to basically zone out. Teachers were concerned, and called it “withdrawal” and “escapism”, but it was, in a way, to go to church. Not that my family went to church or was religious, but I would flee the hardship of bullying life, and play hooky from Math Class by looking at the clouds out the window. In a hard-to-define manner there is more Truth in a single cloud than in a thousand hours of Algebra. (There is more Truth in a teenaged mother suckling her infant than in a thousand hours of nursing school. And so on and so forth.)

I could go on for a long, long time about how Truth is Beauty, and Truth is Power, and Truth is Wisdom, and Truth is Love, but the short version is this:  Sometimes escapism is good for you. Sometimes you just need to stop on your way home from work, and watch a sunset. 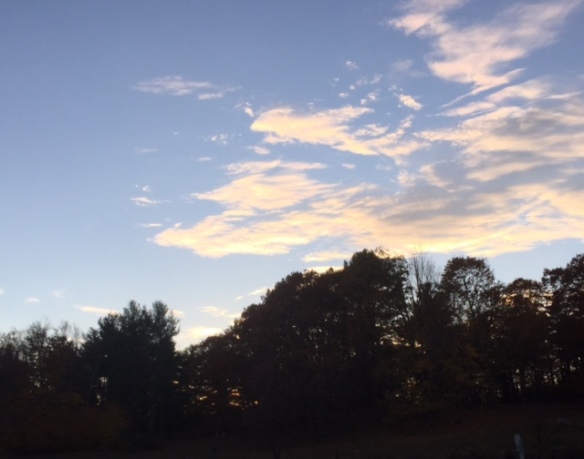 A smattering of white clouds to the west
Abruptly became a symphony of sunset;
Turned gold and then blossomed roses: The best
Scarlets and crimsons, against a coverlet
Of blue sky…reminding me…reminding
me…reminding me of some lost flavor
Sniffed in the ardor of youth’s hope of finding
A new distance to dream at…new favor
To yearn for…a Savior to please: A lost
Outlook life is robbing me…robbing me…
Robbing me of, until I think of cost
Before hopes, and nothing sets joy’s sobbing free
Unless a sunset sky taps my slumped shoulder
With nursery dreams amidst thoughts far older.

In conclusion, it is important to remember that powerful people in high and mighty places are not in control of the sunset, and any number of other things that are full of beauty. The fact of the matter is, they are likely so busy with budgets they completely miss the sunset. But that is no reason for us to miss it, as well.

It was with amazing audacity that, at some point, certain people in power decided they controlled the weather. The entire Global Warming political-plan is a display of unparalleled arrogance.

It was based on the idea that, concerning a river, we can to a degree control the flow with dams, and can control how much pollution is in the water. However we do not really control the flow of rivers, because we do not control the rain. However, because we are able to be less filthy, and clean the waters of our rivers, and manage our dams in wiser ways that better regulates the water’s flow, and can build fish-ladders that allow shad and herring and salmon to swim up to places they swam before, we feel we are the boss of rivers. Not. Floods occur. Our best engineering is bested. The Mississippi will, sooner or later, change its course and reach the sea a hundred miles west of New Orleans, and New Orleans will become a backwater.  And that only involves the subject of rivers.

The idea we not only control rivers, but also control the weather, is a bridge too far. It is a puffing of human importance past a popping point. When our president claimed his administration would stop the seas from rising,  he denied the truth King Canute spoke when he (supposedly) said, “Let all men know how empty and worthless is the power of kings, for there is none worthy of the name, but He whom heaven, earth, and sea obey by eternal laws.”  (This was after his courtiers praised his power, and he decided to show them how powerful he was by forbidding the tide to rise.)

The simple fact of the matter is we do not have control over the seas, (unless it is through the power of confessed-powerlessness, called “prayer”.) The slight rise of the sea, mere milometers each year, has neither sped up nor slowed down under the current administration. In like manner, we have no control over the climate, (unless we control the sun, which increasingly seems the controller of climate).

To me it seems that to blame the weather on some small citizen, who is basically minding his own business, is the behavior of a silly bully.  It seems an even worse bullying to bluster at me, when I point out the bullying behavior of Alarmists is ludicrous. At times Alarmists could almost spoil my mood, but that would indicate they had the power to spoil my mood. As a small child I learned they couldn’t even do that. All I needed to do was ignore them, and attend to That which actually does create the sunsets. In other words, to “zone out”.

Just for an example, some are all bent out of shape by the slow growth of Arctic Sea-Ice this autumn. (They fret the slow growth is because of Global Warming, even though it is counter-balanced by above-normal snowfall in Siberia and Canada.)

Now, to zone-out in an appropriate manner, regarding the slow growth of sea-ice, you should go to the south of the world’s largest estuary, called the “Gulf of Ob.” 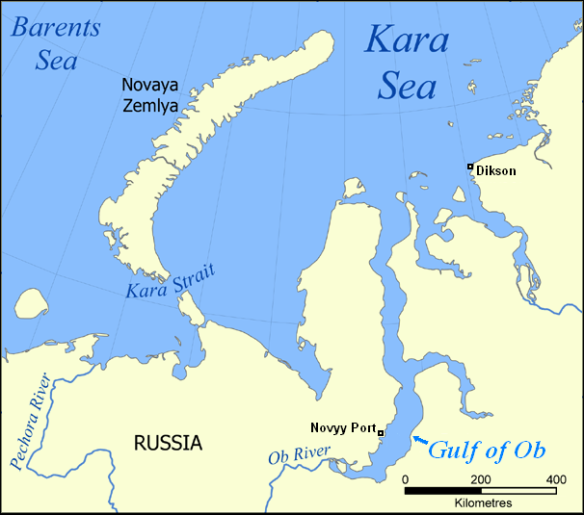 This year, as the sea ice started to form in the Gulf of Ob, it formed “pancake ice”, but, due to a series of unusual conditions, the ice got rolled on the sand on the beaches, and formed rarely-seen spheres of ice. This would not have been noticed, were it not for a small community of 2000 people near the beach, called “Nyda”. They put pictures on twitter, which got noticed by:  http://siberiantimes.com/home/

This got noticed by the BBC, and then Iceagenow.info.

Now, rather than alarm, people seemed to think this unusual event was rather wonderful. Where the balls, ranging from tennis-ball-size to beach-ball-size, packed up against the shore, a dear old Dad did manage to look almost serious.

However the family dog didn’t seem particularly concerned, (and we all have heard how animals are more aware of impending disasters than humans are). 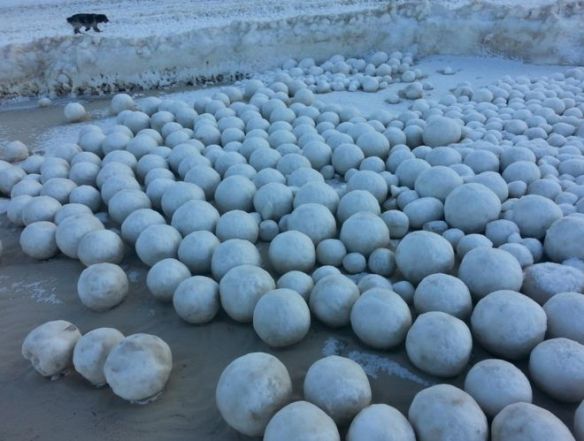 And the kid thought it was cool

But it was the young mother who made the event beautiful.

In the end, I see the slow growth of sea-ice as a beautiful thing. It is but another example of how Truth has more types of loveliness than we can possibly ever see, even if our eyes are open to seeking such beauty.

Pity the ones whose eyes are closed.