September starts the battle between summer and winter that summer is bound to lose, but which is always interesting to watch, as waves of warmth from the south grow progressively weaker, and the north rears up tall and cruel.

So far the cold has remained locked up in Canada, but this just means their snow cover builds up early. On his Weatherbell blog Joseph D’Aleo reported snows are already building to our north. 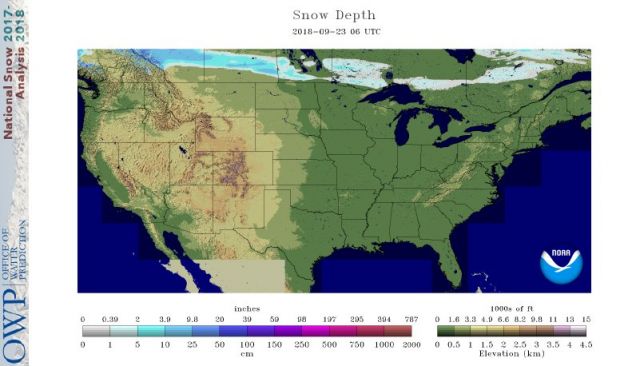 For a time the Canadian cold was kept in check by a strong Bermuda High, displaced north, which brought us steady imports of tropical air up the coast.  To the south of the high pressure the Trade Winds came further north than usual, bringing balmy ocean breezes to the Carolina coast, and all enjoyed the beaches,  until, like a cork riding in the stream of the Trade Winds, Hurricane Florence approached from the east. Envy turned to pity as over a million fled their vacations.

Florence slammed ashore and then curved north to New England. I had had forgotten that few things feel quite as tropical as a hurricane. In terms of a pity-party, we could not compete with North Carolina, which got over twenty inches of rain and far more wind. Yet I think we, here in southern New Hampshire, deserve pity for not getting pity. We got over five inches, and everyone just ignored us. What’s the use of suffering, if you can’t milk people’s hearts? 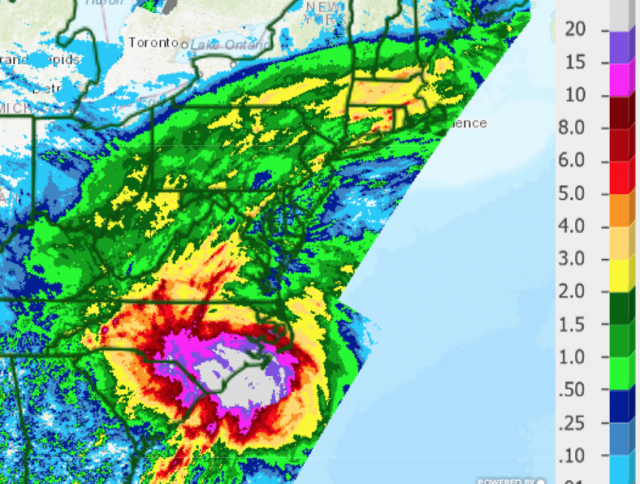 The remains of Florence passed over us with the nearest Canadian cold front far to the north, so although the winds had died Florence remained a pure, tropical system. Seldom do we experience such darkness hand in hand with such warmth, this far north. (Our dark summer thunderstorms are usually due to cold fronts, and involve cold downdrafts and even icy hail.) The rain was warm, and the day was deep purple, and I decided such a rare event deserved a sonnet.

Out of breath, with nothing left but rich rain,
The hurricane came north and it grew dark
As December by noon, but heat can’t feign
It’s winter. The rain poured, and my small ark
Was my roof, and my windows looked out on
A steamy world, with leaves still summer green
Yet darkness deepening after dim dawn.
The roar was not wind, but a rain seldom seen
This far north. On and on the torrents poured
And flat streets became lakes and cars were boats
With wakes, and then my watching spirit soared
As happily splashing in bright raincoats
The children came laughing, dancing eyes bright.
Even on dark days there’s always some light.

Even before I put the finishing touches to my sonnet the hurricane had moved out to sea, and its exit dragged down some colder Canadian air that utterly changed the quality of our rainy weather. Abruptly the rain was of the sort that turns an old man’s hands purple. This is actually gave  us far more of a reason for a pity-party than a nice, warm hurricane, for not only does cold rain make it difficult to do summer chores like mowing wet grass, but it makes it hard to face autumnal chores, such as stacking wood. It seemed time to tune up the violins, for a new self-pity was building. Life is hard enough, for even on a sunny day it is not as easy for an old geezer like me to do such chores as it was when I was younger. Oh, woe is me.

And abruptly the nights are longer than the days, and there are more hours of chilling than of warming, and, right on schedule, it cleared just at sunset and the long night gave us our first touch of frost.

It was actually a day late, on September 23 when our average first frost is September 22, and it was the sort of touch that only happens in low places and doesn’t kill the tomatoes in the garden, but first frost is a hint, and I’m wise to the ways of winter and can recognize the signs, though the bees may still be humming in the asters.

Yet I have discovered something. I cannot take a hint as well as I once could. Years ago autumn shifted me into high gear, and I enjoyed the zest of labor in cool, crisp weather. Now the hinting strikes me as a bit like nagging. Rather than zesty I get grouchy.

These changing seasons really are too much
For a dignified old man to handle.
I deserve respect, and a gentle touch,
But these changes want to snuff out my candle.
I’m ready for heaven, where it’s summer
All of the time, without these shifting gears.
Winter’s a bummer, and nothing’s dumber
Than changes, to an old man of my years.
But here we go, the old sun’s gone lazy
And stars fill the sky when I rise from bed.
I nod at Orion, but think he’s crazy
To fight the good fight and bleed as he’s bled.
Forever he fights, from autumn ’til spring
But if I could, like a duck, I’d take wing.

It seems unfair to me that the sun gets to sleep late while I have to get up early, yet even as I was grumbling and rosining up the bow of my self-pity-violin, a slug of superb summer weather surged north. But then, even before I could put my violin back in its case, Canadian cold came crashing into the warmth.

What an awesome evening, with the night lit by brilliant flashes of lightning, and thunder prowling from horizon to horizon! I left work late, and after I turned off the lights I just stood in the parking lot, watching the magnificence. Rain soon budged me, but then driving was a wonder, with flashes lighting the deep dark depths of night forest with crazed shadows, and every raindrop frozen in midair by blinding pink. The rain was erratic, deluging down the street even as I drove in dryness, and when I made it home I could dash to the door between downpours. But once I made it to the sheltered porch I had no desire to go in, and turned to watch the incredible sky. I felt like a mouse under the floorboards, or like I had rented an apartment with gods living upstairs. Yet the odd thing was that though I felt minuscule, I forgot all about my self-pity violin.

Two thoughts then occurred to me. The first was that the Senate Hearings about the Supreme Court nominee have somehow degenerated from a job interview into a massive pity-party. The second was that pity is pretty useless when nature is displaying her might, and a hurricane has dumped two feet of rain and the rising river is pouring through your front door; then you don’t want pity; you want a rowboat.

Sometimes pity is absurdly impractical. Self-pity is not merely self-centered, but also ungodly, for among all His infinite attributes God is infinitely practical.

Already the north is whitened by snows
But still the sunny, stubborn south stays strong.
My fate depends on which way the wind blows;
You can tell the weather by my songs.
In ways I’m just a flute played by the breath
Of powers far, far greater than I am.
I’m battered and flattered nearly to death
By forces I deem do not give a damn
About puny mortals as mousy as me.
Tonight God’s gods played with fire in the sky
As south fought north, and vision could see,
As thunder slammed, just how weakly I try
To befriend the Truth who made sky’s berserkers.
Seek God, or else you’re just grist for his workers.