This plunge in temperatures from zero to -23º F (-18º to -30º Celsius) occurred due to a reversion to a zonal pattern we’ve seen a lot of, this winter. The spike occurred due to the only real invasion of slightly moister and milder air the Pole has seen this winter, due to a North Atlantic gale roaring up to Barents Sea, and then its remnants drifting up to the Pole. We even saw a brief incarnation of “Ralph” (Anomalous area of low pressure) at the Pole, with the typical “feeder band” of milder air curving up to its core.

As usual, my computer vaporized the next week’s worth of maps, so you are going have to to take my word for what followed.  The “Ralph” in the above map filled in and its  feeder band chilled in the arctic night. The following North Atlantic gale, just south of Iceland in the above map, is named “Rap” because it eventually wrapped around the Pole. Rap made it up to Barents Sea as the last in a series of extra large storms, but then could make no headway to the north, and instead rode along the north coast of Siberia. Rather than a feeder-band curving to the north, a sort of spear of milder air drove west to east along the Siberian coast, providing a pathway for lesser lows, and a week later the maps looked like this, with Rap weaker and northeast of the Laptev Sea, leading the “spear” of milder air along the Siberian coast: 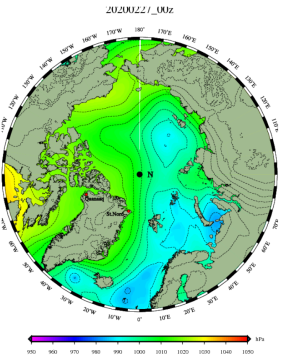 These “spears”, that somehow are able to cross the enormity of Eurasia and reach the Pacific, always fascinate me. The mild air is of course modified colder by the time it gets to the Pacific, but its identity survives and it is nothing like the brutally cold air which Siberia home-grows when left alone.  I’ve seen such spears further south, crossing the Steppes, and have noticed there is often a counter-flow further south, a sort of backwash which brings east winds and cold air to places which don’t usually see it, such as Saudi Arabia. And Saudi Arabia did shiver as this spear of sub-freezing but relatively mild air swept west to east along the arctic coasts of Eurasia.  (Also Kazakhstan, south of Russia, saw record snows).

Though Rap weakened, the isobars remain fairly tight ahead of it. This brought south winds ahead of Rap, and, as we have seen all winter, sea-ice was pulled away from the Siberian coast and crushed north into the Central Arctic. The Polynyas that form at the coast in such cases swiftly skim over with “baby-ice”, so the “extent” graph showed no dramatic drops, and remained at a level higher than recent years. 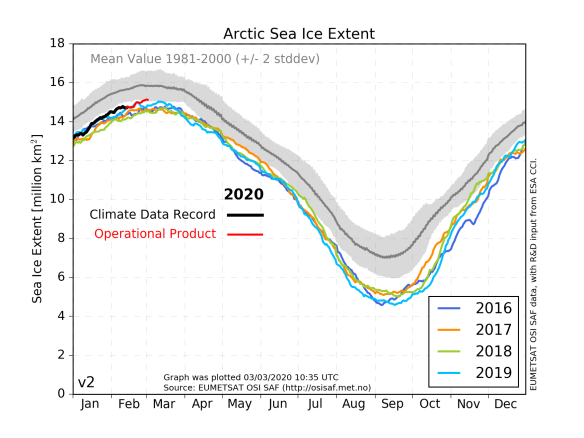 While this “extent” is the highest in five years and likely depresses Alarmists a lot, it is important to remember the sea-ice is quite thin along the Siberian coast, and actually looks dark, almost like open water, in visible satellite shots. For example, here is the coast of the Kara Sea: 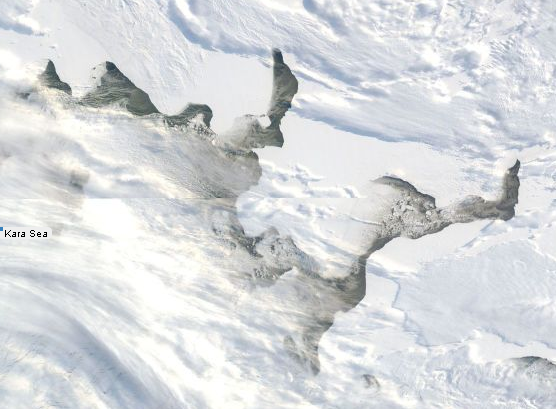 Though such thin ice counts on the “extent” graph, it likely will melt swiftly in May, and the Northeast Passage will likely open early, at least to the mouth of the Lena River in the Laptev Sea. In fact all the lilac areas on the NRL thickness map are likely to be sea-ice that is tenuous and fleeting, as the sun rises.

What will be interesting to watch is the Central Arctic, where all the sea-ice has been pushed north to. (I’m not sure I trust the above NRL  map, as it shows ice 6 feet thick where the DMI map (which hasn’t updated since February 17) shows ice 12 feet thick.) The sea-ice there is thickening even as I write, as it has gotten so cold there.

Another indication the sea-ice might be pretty thick is that the Russian beast-icebreaker Kapitan Dranitsyn took around two weeks longer than expected to resupply the MOSAiC expedition’s ship, Polarstern. (The polar night is giving way to twilight up there, and I’m hopeful we’ll soon get some good sea-ice pictures).

A crack appeared in the blue-ice airstrip serving the MOSAiC site, but I’ve noticed they are speaking of leads a meter or two across, and not the wide leads we’ve seen with infrared satellites other years, which on occasion have been many miles across.

Of especial interest is all the observing the MOSAiC scientists have been doing under the ice.

I can recall that, not many years ago, the Arctic Sea was called a “desert” away from the shores, because it was assumed it was relatively sterile away from coasts, like other oceans are. (It was assumed that if the sea-ice melted away from the fertile shorelines that seals and polar bears would starve.) Recently it was discovered that enough plankton and algae lives on the underside of the sea-ice to feed a whole ecosystem, including arctic cod, far from land. However then some assumed this ecosystem must go into a sort of hibernation during the winter, when lack of sunlight hypothetically would decrease the food supply. However the MOSAiC observations indicate the arctic cod are active in the darkness, and there are even seals hunting those cod in the dead of winter, which indicates there must be enough cracking of the ice to supply the seals with air-holes. This goes to show you how eyes-on-the-ground are still important, and not everything can be seen by imaginative minds sitting at computers.

They are also doing some interesting work to study the “turbulence” under the ice. Using the word “turbulence” may be a bit of an overstatement, but it does show minds open to the idea mixing occurs as ice with “keels” is blown against the flow of sub-ice currents. I expect interesting data will emerge from this escapade.

To return to the building cold at the Pole, a scan of the next week’s maps show Rap weakening but retaining its identity as it continues east north of Bering Strait and wanders north of Alaska and then Canada, before finally fading into the Canadian Archipelago. While the “spear” does curve around with Rap, it loses much of its heat in the process. Cold builds at the Pole itself as no “feeder-bands” probe north (unless you count a very cold feeder-band Rap swung clear around the Pole, that curved north of the Canadian Archipelago). 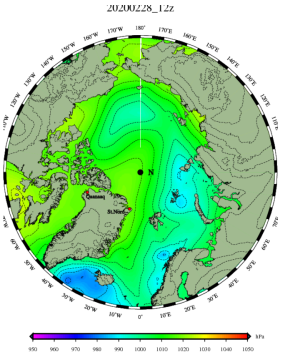 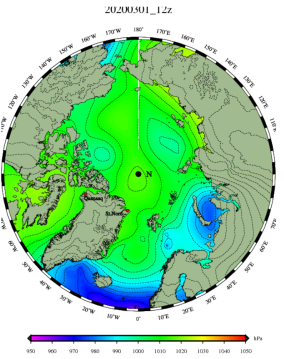 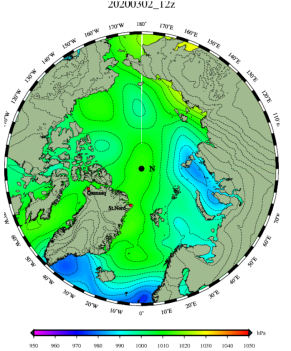 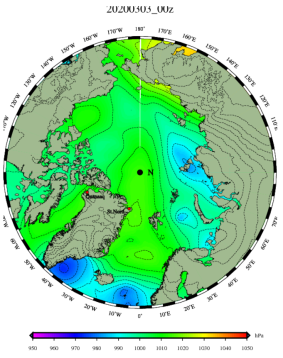 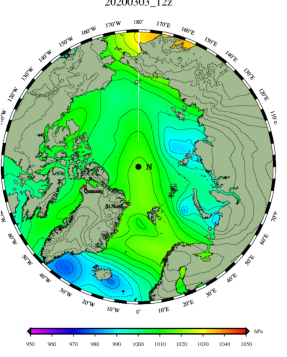 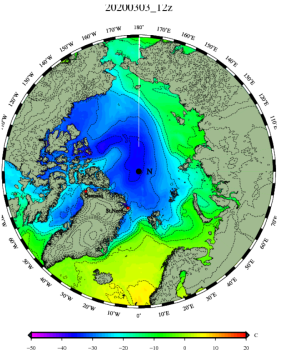 It is also interesting that the North Atlantic has been quieter, (though a fairly decent gale crashed into England, south of the area these maps show.) But of especial interest is the way Rap dislodged the high pressure which has been sitting over Bering Strait much of this winter, clawing that high-pressure over to Alaska and then Canada. That high has been a de facto center-of-the-Polar-Cell much of the winter, in a sense displacing the zonal flow to the Pacific side, like a beret worn by the Earth at a jaunty angle. Displacing it into Alaska represents a noteworthy wobble, a “disturbance in the Force”, and made me more alert, however so far what has seemed to happen is that a new center-of-the-Polar-Cell has formed over the Pole itself, as if the Earth sobered up and straightened its beret.

When the former Bering Strait high-pressure was budged into Alaska the winds in Bering Strait became southerly, but there wasn’t much warming brought north before a new high-pressure pushed in from Siberia, turning the winds in the Strait north again. So much cold air has poured south, and east off Siberia, that the “Warm Blob” south of Alaska is greatly shrunken, and the Pacific is  shifting to a “cold” PDO.

On his blog at Weatherbell Joseph D’Aleo produced a map which shows the change in anomalies since November 1. It is somewhat startling how significantly the Pacific has cooled. 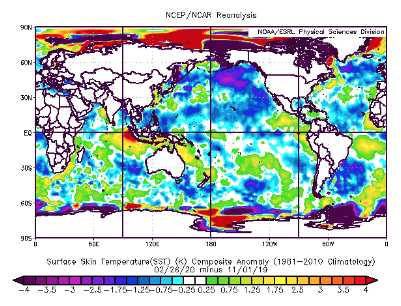 I did not expect the PDO to dive so dramatically: 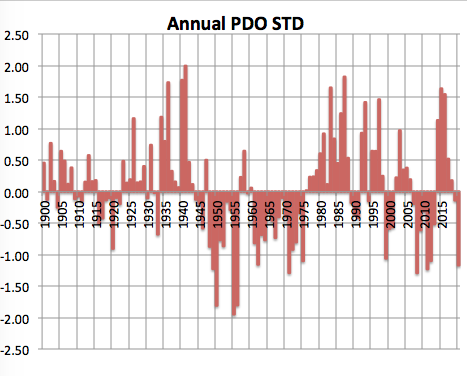 If the PDO remains “cold” one thing to watch for (which has happened in the past) is a failure of the sea-ice north of Bering Strait to melt away in August, which can make a considerable difference to the “extent” graph at the September minimum. Even as the sea-ice vanishes swiftly on the Eurasian coast, especially west of the Lena River, we may see the sea-ice persisting east of the Lena and north of Alaska. The minimum would be higher than recent years.

Will I bet good money on it? Well, maybe a nickle.