I have to add a sequel to my humidity-grousing, for we had an event too good to avoid being grumpy about.

A  front was at long last pushing west to east, and there was high anxiety about whether it would push out to sea in time for a local church fair, and a very big local fireworks display.

I tried not to care about the church fair, for I left that church. But then it seemed wrong not to care, so I did pray and the sun did come out. But it only bloomed up big billows of cloud and the fair got poured on. I suppose I didn’t pray hard enough, or perhaps my grumpy side snuck into those prayers. In any case, as it poured I tried not to smile. But it’s an effort being spiritual, at times.

Then it cleared off at the end of the day and we headed off to the fireworks. I brought my raincoat. My wife shook her head at me and rolled her eyes.  There was not any sign of rain on the radar.

The fireworks are a big deal, set off by Atlas, the second biggest fireworks-maker in the world. (The biggest is in China, of course.) It is a demonstration of their latest creations for potential customers at the airstrip in Jaffrey, New Hampshire,  and over the years greater and greater crowds have come to watch, and they now make quite a bit of money charging people who want to park right on the runway to get a nearby view. Now around twenty-five thousand people show up, at $50.00/car. It was amazing how many were packing into a car, but they created a limit, which ended that part of the circus.

The circus, (and it is a bit of a circus), tends to be wonderful assortment of people who seldom rub elbows, ranging from Mennonites in gingham to Bikers in leather, all showing up starting at around 3:00 in the afternoon for fireworks that don’t start until 9:00.

There are places selling hot-dogs and burgers and chicken and fry-bread, and some of the old-fashioned carnival attractions to prove your strength, which I tend to avoid, due to fear of wounding my ego.

(I got talked into trying one last year.  It was some sort of Army-recruitment gadget where you slug a cushion and it measures the power of your punch, using some scale of one to a hundred. The little kids were reaching five to ten, and the young fellows fifty to seventy, and their girlfriends forty to fifty. One grandson reached seventy, so my eldest son had to hit seventy-five and then other, smaller grandson popped the pad for thirty. Then I walked up, in a hurry to get the humiliation over with, and threw a quick cross-body punch you could never throw in real life, unless the fellow hung his jaw a foot off your right shoulder. I got my whole body into it and the dial shot right to a hundred. Everyone looked a bit startled, and I was utterly gratified, and decided then and there to retire undefeated.  And no, the Army didn’t ask me to enlist,)

Mostly I like to stroll back and forth with my wife, up and down the runway, people-watching. They have a very good system of speakers, and a couple of disc-jockeys who prattle and play four generation’s worth of music. The weather looked decent and my wife teased me about my raincoat. The disc-jockeys said we should look up at the sky-divers, and we looked up, and the second disc-jockey said, “You idiot; that’s a commercial airliner!” But then we heard a faint engine and saw the small plane high above, and tiny black dots spill from it, and come down to land precisely on their target (with a man dashing beneath them to keep the flag from touching the ground).

The wait always seems like it will take forever, and I was a bit nervous about how the lower clouds still hit top of Mount Manadnock as they passed. As it grew dark it felt damper and damper. But at long last the display began. It is a solid half hour of non-stop fireworks choreographed to music, and there is a collective sigh from the crowd as the first flower bursts in the sky. 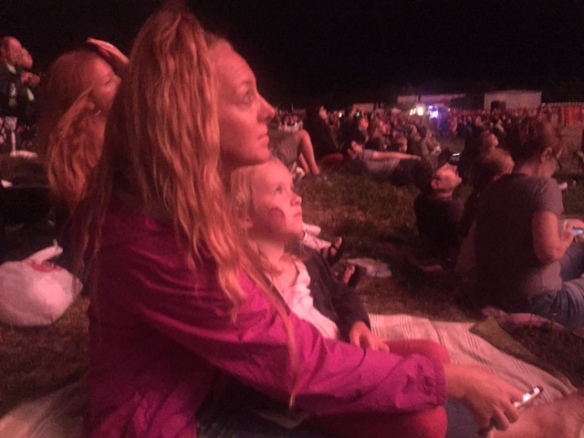 However I immediately noticed each bright spark seemed to leave a tiny contrail. The air was so saturated we were doing a sort of cloud-seeding experiment. 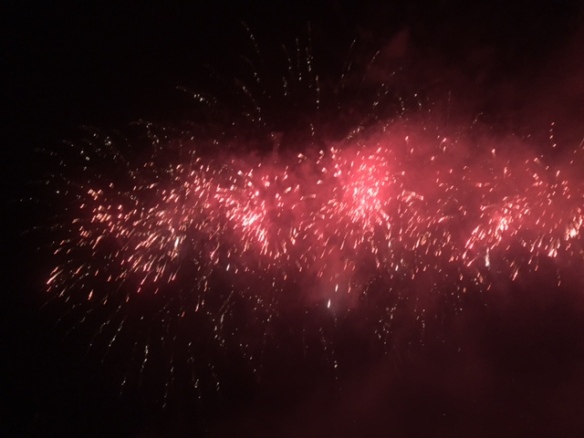 The growing fog bank was especially obvious near the ground. 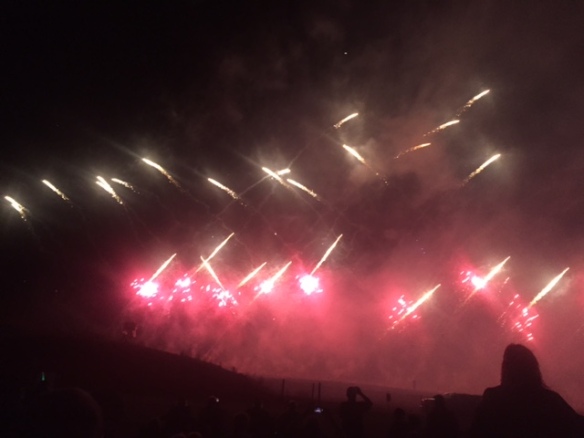 As the display increased in intensity, so did the fog bank, and by the time of the thunderous finalé you couldn’t see a cotton-picking thing. There was just a lit-up smudge of fog shifting from one dirty mix of messed-up colors to another, accompanied by thunderous noise that you could feel on your chest. Then it stopped. There was not the usual wild roar of appreciative applause. There was just a strange sound, not quite silence, that 20,000 people make when they have waited three to five hours for a smudge: The sound of mass dejection. To top it off a thick drizzle began to fall. I pulled up my hood with emphasis, when my wife looked my way.

People watching from a hill to the north saw all the fireworks emerging from the fog bank, and said it was spectacular, lighting clouds both above and below. But the wind was just perfect to shower us all with ashes and bits of the clay that they use as a packing material in the shells, (which is also apparently good nuclei for cloud droplets.)

The next morning dawned foggy, but the sun soon broke out.  I walked out and noticed my wife’s white car looked like a Dalmatian, and added “go to the carwash” to the day’s list.

Anyway, that is another answer to the question, “How humid was it?”