A weak front moved through today, mostly with mid-level clouds that I like, as they dapple the sky with subtle hues, and can be particularly lovely  when the sun gets low, and the sun is getting pretty low even at noon these days.  Our days will as short as the last day of January, tomorrow. It isn’t as cold, because there are many lakes and bays between here and the North Pole still “remembering” the summer sunshine, and until they are all frozen and the landscape is all snow covered, the cold is moderated as it comes south. However one by one those lakes are freezing over, and even Hudson Bay starts to freeze over in November. I remind myself to cherish every moment remaining, when I can scuff through the leaves in a snow-free woods.

The air behind this current front is Pacific air. Likely it poured off Siberia and then was warmed by several thousand miles of ocean, and then was warmed further by the Chinook effect of crossing over the Rockies.  The next batch of arctic air will  come down the east side of those Rocky Mountains, and be warmed by neither Pacific nor Chinook. The first map below is the current map, with the cold air far to the north, but the second map  is 60 hours from now, and the sub-zero Fahrenheit air (gray, and, in Celsius, minus 17.77777777778 degrees, to be precise,) has stormed right through Montana and into Wyoming,  and is already spilling east to bother me, though it hasn’t gotten here yet. 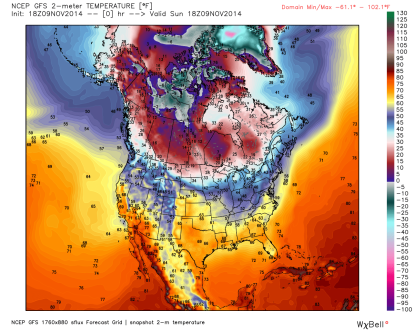 (Map credits to  Dr. Ryan Maue at the Weatherbell site.)

With this kind of cold air coming, you would think that I could enjoy the relative mildness of the current air, but I don’t always live up to my own standards. Even slightly cold air bites the back of my hands like it never did when I was younger. I suppose my skin’s gotten thinner. I can even understand why other geezers my age flee to Florida, (though I could never stand the traffic, and crowds of other geezers.)

It doesn’t help much that my church is just a dwindling bunch of geezers, with a geezer Pastor who is in a bit of a sermon-slump. He seems pretty much convinced churches are dying out in New England, and has a morbid fascination with the process of becoming extinct. One book he had us read was “Autopsy Of A Church.” It’s not the most uplifting stuff. Today he even managed to make the Beatitudes depressing. I won’t go into the details. Let it suffice to say I wasn’t pleased. Now I’m probably in trouble with my fellow geezers, because telling your pastor he’s a real downer is apparently a symptom of a dying church.

It just seems to me that the Beatitudes were suppose to cheer the downtrodden up. Somehow today’s sermon seemed to portray it as eight steps in a wonder-plan,  with the final step being that you become a social outcast.  I have to admit I’d never thought of it that  way before. I’d always thought that, where most people think a streak of bad luck means God is punishing you, Lord Jesus was saying He especially loves people who suffer.

In any case, I walked out of church with an expression like a prune. A gust of wind bit the backs of my hands. I was in no mood to head off to the farm and deal with a population explosion of gray squirrels. 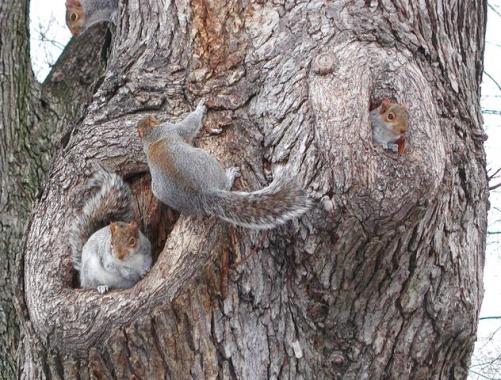 It’s bad enough that I have around four days to get two weeks of work done, before the hounds of winter come howling.  I also have to deal with twelve squirrels, as the local weasel apparently headed off to Florida, and two pairs of neighborhood gray squirrels managed to each successfully raise a brood of four, at the very end of summer. They are all frisking about, as cute as can be, causing an incredible amount of damage.

I set rat traps, but apparently the squirrels are a bit too big for those over-sized mouse traps. They got clobbered but not killed. One has no hair along his spine, and another has a crooked tail, and a third looks a little cross-eyed, but they are still frisking about.  So I got my varmint rifle, but apparently someone else in the neighborhood has been taking pot-shots with a .22, for soon as I stepped outside they were gone. I could barely see their gray tails flicking as they headed off into the woods. What was particularly aggravating was the fact that as soon as I put the rifle away, (you have to be careful with guns when you run a Childcare), they would reappear, more frisky than ever.

Then I heard them up in the airspace-attic of the Childcare.  There are vents up at the peak of the roof,  securely nailed and with screens, but apparently, when twelve squirrels all say :”heave-ho” at once, they can rip entire vents out.  So I had to cut squares of thick wire hardware-cloth and teeter up there on a ladder, with the wind biting the back of my hands and the ends of the wire drawing blood, using a staple gun to close up the openings with squirrel-proof screening, as I took the badly-gnawed vents down for repairs.

While I was up there I glanced down towards my garden, where my popcorn is ready for picking. Popcorn takes 110 days to grow, and then has to dry on the stalk, and, with the last frost on May 29 last spring,  it was a feather in my cap to get any crop at all. However, as I looked that way, it looked like, rather than ears of corn, the stalks held gray squirrels. All twelve were frisking about in joy and delight.

That popcorn was suppose to be for the children at my childcare! Those cute squirrels were depriving cute children! A cold emotion came over me, and I decided the childcare curriculum for next week would include, “How to make a squirrel pie.” I would use my “Have-a-heart traps,” which would be renamed “Have-a-pie-traps.” I would use peanut butter for bait. Squirrels can’t resist peanut butter. (After all, they kept coming back to the rat traps for peanut butter, no matter how often they got clobbered.)

As I came down the ladder in this grim mood I learned an astounding thing:  Squirrels are psychic. They had vanished. I could understand them vanishing when I came outside with a varmint rifle, because they could see the rifle, but to have them disappear when I was thinking grim thoughts? They had to be psychic.

Then, as my grimness faded into wonder, I decided they couldn’t be psychic. There must be some other reason. So I started to look around. Suddenly I stopped. Up in the leafless branches of a big, old oak tree beside the Childcare was a frowning, gray hawk. (I think it was a Cooper’s Hawk.) Compared to cute squirrels, it looked very mean.  It was cocking its head left and right, scouting out the situation. It looked tired and hungry. Then it met my eye before I could look away.

It’s a funny thing about hawks: They will sit up in a tree for hours as you work, and never budge, but as soon as you meet their eye they will fly away. It is as if they recognize they have been recognized. However as this one flew away I could see it didn’t fly far, and I also imagined I could see a cartoon balloon above its head, reading, “Memo to self:  Delay migration. Much food here.”

Not that I won’t set the have-a-heart traps, but I may not catch any squirrels.

And the moral of the story is this:  Sometimes your problems are cute, and the solutions are not. 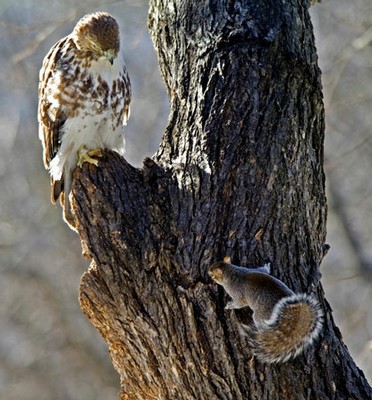 (Photo credit: http://www.birdsource.org/gbbc/gallery/2007-winners-and-finalists/RETHAW_ArdithBondiNY07.jpg/view ) (This hawk is a red-tailed hawk.)