On his blog at Weatherbell Joe Bastardi noted that a major North Atlantic Storm looks likely to crash into Scotland, and in its wake alter the pattern over Europe, which could become colder and snowy. Here’s the GFS map of the storm on Thursday morning: (Dr. Ryan Maue map from Weatherbell.)

Last year such a storm always seemed to bring a surge of warm air up from the Azores all the way to Finland, but this year not only is the warm sector cooler, often with it’s sourse region Greenland (moderated by cross-Atlantic travel), but the warm air doesn’t penetrate so far north before the storm’s cold front, (with air from Iceland)  catches up and occludes the warm air up off the ground.  In this case the north side of the storm’s east winds will be tapping into very cold air parked over Scandinavia and eastern Siberia.

By Friday the storm is winding down a little, and crashing into Norway.

There is much less warm air over Scandinavia. Where has it gone?

I think at least some of that arctic air has been sucked east and then south, into the storm. The much milder waters of the northern tendrils of the Gulf Stream, heading up towards Barents Sea north of Norway, warm that frigid air right down at the surface of the water, but a couple of hundred feet higher up that air remains extremely cold, and is curved around and down towards Scotland.

By Sunday the storm has moved on northeast of Norway, and the map shows isobars straight from the Pole to London.

The temperature map shows it much warmer over Scandinavia, but much of the cold air seems to have been gobbled up by the passing gale and swung down to milder climes, as nearly all of England is below freezing, as is much of Germany, France, and even Spain. 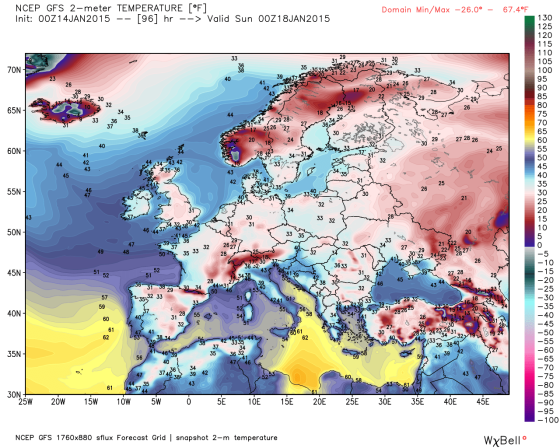 The question now becomes, “Is this a brief visit of north winds, or could it be more lasting?”

I hasten to add that the above maps are from the virtual world of computer models, which can be false prophets. They have been particularly bad this year, when it comes to seeing cold hit Europe. My personal theory is that they are based on a zonal flow, where storms and air-masses are well behaved and move around and around the earth, and the models have a hard time with loopy “meridianal” flows, where cross-polar-flow brings storms and air masses over the  top.

In a most general way, I would describe the pattern this winter as heading from the Atlantic right up to the Pole, and then rebounding south to Siberia. I am watching to see if the pattern repeats. If it does repeat then the gale, after moving north of Norway, will slouch south into Siberia, and the east winds north of it will bring fresh Siberian cold back to the west, to Europe.

Lastly, I’ll watch to see if the pattern then gets stuck, and “locks in.”  If it does, a repeat of the January and February of 1947 might be seen in England.

If I get time tomorrow I’ll look up an elegant description of that winter in James Herriot’s book, “The Lord God Made Them All.”  If my memory serves me correctly, that winter was mild to start, and they had a green Christmas in Yorkshire, and it wasn’t until late January that times grew hard. If I find it I’ll update this post with his testimony.

“…That was in 1947, the year of the great snow. I have never known snow like that before or since, and the odd thing is that it took such a long time to get started. Nothing happened in November and we had a green Christmas, but then it began to get colder and colder. All through January a north-east wind blew, apparently straight from the Arctic; usually after a few days of this sort of unbearable blast, snow would come and make things a bit warmer. But not in 1947.

Each day we thought it couldn’t get any colder, but it did, and then, borne on the wind, very fine flakes began to appear over the last few days of the month. They were so small you could hardly see them, but were the forerunners of the real thing. At the beginning of February, big fat flakes started a steady, relentless decent on our countryside, and we knew, after all that build up, that we were in for it.

For weeks and weeks the snow fell, sometimes in a gentle, almost lazy curtain that remorselessly obliterated the familiar landmarks, at others in fierce blizzards. In between, the frost took over and transformed the roads into glassy tracks of flattened snow over which we drove at fifteen miles an hour…”

This is a fine description of what occurs when a pattern stops swinging between two extremes, and simply “locks in”. It is a rare event, but history does repeat itself, which is why we study it.

By next Wednesday, this is how much snow the American GFS model sees will have fallen on Britain. (Click to enlarge.) 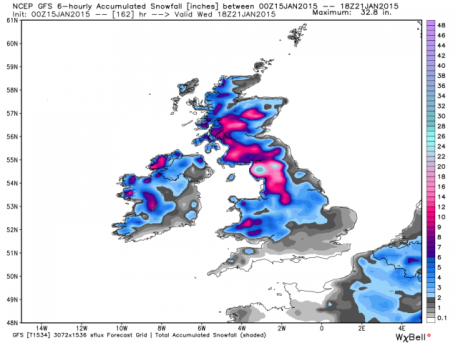 Remember, these maps are fiction until verified, and also show how much snow falls, without showing how much melts. Lastly, they are based on a one-inch-of-rain-makes-ten-inches-of-snow formula, and gloppy snow may create lesser amounts, while fluffy powder may double the amounts.

If this forecast verifies, then poor Dr. David Viner is going to again be sorry he ever said, “Children aren’t going to know what snow is”, back in  2000. The “Snowfalls Are Now Just A Thing Of The Past” headline will haunt him to the grave. However he did get a lot of speaking engagements and money out of making a total fool of himself, and some people can count their cash and have no  shame:  http://www.independent.co.uk/environment/snowfalls-are-now-just-a-thing-of-the-past-724017.html

It remains to be seen if the pattern will “lock in” or not.

The above snowfall-map was produced by Dr. Ryan Maue, and lifted from Joe Bastardi’s blog, at the Weatherbell site. (I feel compelled to promote the thousands of maps and excellent commentary I get at that site, for the price of a cup of coffee a day, because I lift ideas and maps from them so often.) Besides studying the action-and-reaction of the current maps, they are historians, and have done well by finding situations in the past that resemble our current situation, and using such analogs to point out what is probable and what is not. They have been suggesting arctic blasts and snow is probable for Europe since September, and currently they are making the study of history look wise and any sort of lazy dependence on computer models look foolish. The models didn’t see the current snow and cold coming, nor did they see the cold and snow that proceeded it.  If you put all your faith in computer models you are likely to wind up looking like Dr. David Viner.

(Note: During his video on Weatherbell this morning Joe Bastardi showed some model forecasts that now have come around and even may be going to the other extreme, for they now show the cold and snow “locking in” over Western Europe for three weeks. {Remember, models are fiction until they verify.) Three weeks may not seem like a long winter, but I know from experience even ten days can seem like an eternity when you are slogging through hardship.  And, if the pattern does “lock in”, it could extend out even further into the future, or “back off” into but a brief thaw, even as it “reloads” for another round. It might be time for some in Europe to heed the old adage, “Prepare for the worst and hope for the best.”) 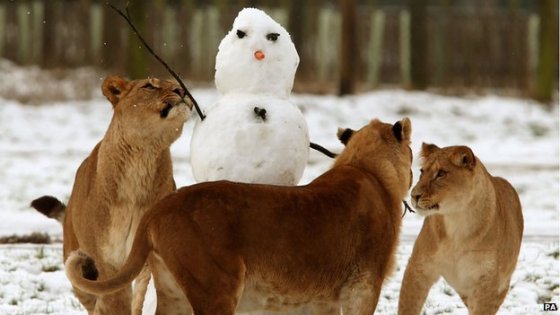