Alexander Orlov, wearing the bright blue shirt in the above picture of the “blessing of the 2017 Barneo expedition”, was the brains, brawn and heart of the amazing yearly event on the arctic ice, and with his wife Irena  (in white kerchief) had shouldered the burden of improving an encampment which he found to be very unsafe, (and his wife found to be very uncomfortable) when they first visited in 2002. In the above picture he shows little sign that he knew he had only five weeks to live. He completed the 2017 expedition, and completed his life.

The loss of such a crucial person undoubtedly makes it harder the following year. Usually the Barneo camp is established by the final week in March. In recent years the latest establishment of the base was March 31.

This year is off to a late start.  Irena has had to work alone, without her husband, and there have apparently been some problems, which she doesn’t go into.

“At first we planned on starting the aerial reconnaissance in the middle of March, but there was just no way to do that, for the difficulties we met were almost inextricable. But “almost” doesn’t mean “totally”, so we still had a chance. And we didn’t lose it. Hard times are gone, and we’re basically over the hump. This night the low platform with two tractors and landing equipment is departing to Tver, together with the landing team. Tomorrow they will leave to Murmansk to prepare the first airdrop of fuel storage tanks at the Jalousie-1 point. Take a look at the tractor’s loading:” 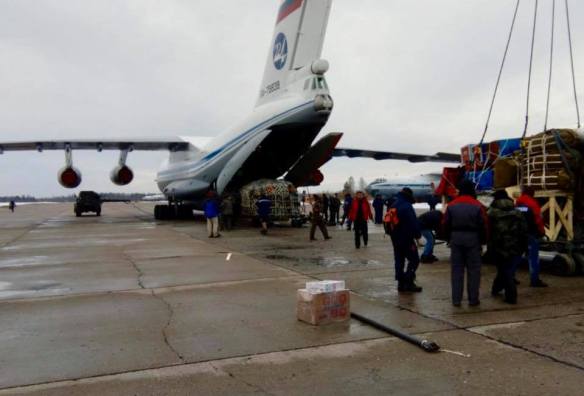 This is only the start of a colossal effort which will create a jetport on arctic sea-ice for a very short period of time. It boggles the mind. Mi-8 helicopters fly north to the the most northerly fuel dump on Srendy Island to refuel, and then basically fly north from there until they run out of gas. Then they land and await more gas to be airdropped to them. This first base is called “Zhalyuzi 1”. Once the helicopters have more gas, they fly on to establish a second base, called “Zhalyuzi 2”, and it is only then, after another airdrop, that they  seek to find the perfect ice-floe, “oval-shaped, detached from the surrounding sea-ice, and…at least 2 km long so that it can accommodate a 1,200 m runway and the (Barneo) camp”. (Irena’s words).

This is not the end of the effort, because in the past such oval-shaped bergs have split, and one year four separate runways had to be bulldozed, before the tourists arrived.

In the past I have been too scornful of tourists who pay what I make in a year for a three day adventure. I think I’m just jealous.

It should be stated that all this effort is not merely done for tourists. In a war-time situation Russia might need to build an airbase in a big hurry on arctic sea-ice, and the construction of Barneo is good practice. However the experience has apparently suggested to some in the Russian military that such a base might be too short-lived to be useful, except in certain contingencies in April. Therefore they are apparently toying with the idea of bigger and bigger ice-breakers, nuclear powered, approaching the size of an aircraft carrier. Once a floating-island-icebreaker, that jets can land on, is built, Barneo will become obsolete.

For safety’s sake Barneo is usually closed down, as a tourist trap, the third week in April. After that the runway might become slushy and unsuitable for jets. However I have seen evidence that the runway is not unsuitable for smaller aircraft with skis, and scientists hang out at the site well into the summer. Though all the comfortable accommodations for tourists have been disassembled and removed, a few huts remain, and there are plenty of pictures of the site where melt-water pools are evident, that were apparently taken in June, or even July, and also pictures indicating the final removal of personal is done by ice-breaker and not aircraft.

Back in 2016 a jet came down very hard on the ice. They always land hard and brake hard, in such a short landing strip. On this occasion the hard-landing didn’t even dent the sea-ice, but the the jets’s landing gear crumpled. Suddenly the Russians had a jet to remove from the pristine arctic, or they would face the wrath of Greenpeace, and also Norway. This taught me a lot about the petty politics Irina has to deal with. My observations are made here:

I think the above post may give one an inkling of the “difficulties” Irena has had to deal with this year, and why she is off to such a late start. Her late husband Alexander Orlov is likely rolling in his grave about how later the start is. However she seems cool as a cucumber and confident her staff will work with same ferocity they displayed other years, when cracks in the runways seemed to make the situation impossible.

An excellent interview of Irena by the blogger “coldartist” from March 31 appears here:

As an aside, during the interview, Irena mentions that, judging from satellite imagery, the sea-ice in the area is “pretty solid, varying from 1.82 m to 1.60 m…:”

My ears perk forward at that, for that seems a tidbit of “Real News”, as opposed to the “Fake News” one is plastered by at other sites. I pay attention to small details, and recognize sea-ice 5-6 feet thick is thicker than sea-ice 4 feet thick, which jets have landed upon in the past.  Back when the Barneo base involved the scientists who gifted us with the “North Pole Camera”, I recall the scientist who froze his fingers putting that camera in place commenting on how the ice was “only” four feet thick.

Now that fellow is no longer invited north. The funding for the “North Pole Camera” has dried up. It is not because the fellow ever stated Global Warming was in any way a fraud. Even if he didn’t drink the Kool -Aid, he gave every indication of serving it and being a loyal Alarmist. However his cameras failed to “further the narrative”.  In fact his cameras seemed to be an anathema, and a “Denier”, for the cameras failed to show the sea-ice melting away.

In like manner, the funding for the O-buoy cameras has dried up. Why? Perhaps they too failed to “further the narrative”. Surely I sound paranoid, but it just seems odd to me that a few years ago we had many cameras scanning the sea-ice, and now we have none.

Now, if we are to continue to use our own eyes, and see what the sea-ice actually looks like, and to compare it with various “interpretations” derived from satellites, it depends on a woman named Irena. Also it depends on rich tourists, who want to spend at least $25,000 for a three day vacation, seeing for themselves what the sea-ice looks like, and that it hasn’t melted away, and that jets can actually land on it in April.

To me it seems a tragic state of affairs that we must depend on rich tourists to post on Facebook, to see the Truth, whereas those we once trusted to tell the Truth, (including even the Pope himself), seem more inclined towards the balderdash called “being politically correct”. To some it is more important to appear correct than to be correct.

If you are depressed, I don’t blame you. It is a very depressing state of affairs we live midst. But, if you hunger for the Truth about sea-ice, continue to use your eyes. Unless the blinders become complete, there will be evidence available. And, even if the politically correct make the blinders complete, and the Barneo base no longer reports actual conditions, continue to stand by the Truth. For then Truth will stand by you.

In other words, stay tuned.