This could get interesting.

Usually things get benign (or boring, depending on your inclinations), at the Pole in June. The 24 hour sunshine warms the air to the temperature of the water, and there is less of a trouble-causing clash between north and south, and winds calm down. Back when we had cameras we tended to see sunshine slowly soften the crisp snow and turn it to slush, as temperatures slowly rose until most of the Arctic Sea was just above freezing. We have been moving in that direction this year, but an interesting storm is brewing on the coast of the Kara Sea.

Usually these lows roll east along the Siberian coast. At most they stall and loop-de-loop, before proceeding east in a weakened state. This one may plow straight north across the Pole.

The European model sees it slowly moving up to Fraz Joseph Land by Friday.

The GFS model has it faster, and deeper, at roughly the same spot by Thursday.

Notice how the GFS has milder air and rain pulled up from central Siberia. (The GFS is always a little milder, for some reason) But mostly the storm has snow, and not the sunshine and thawing we expect in June. But the sea-ice will be bashed and crashed.

By the weekend the GFS sees the storm weakened. (A weakened weekend). And it is directly over the Pole. Snow is still falling and sunshine is scarce.

The Canadian model (which is usually colder) elongates the storm and develops a second center towards Canada, so that by Friday it looks like this (Canada to left rather than to right):

The Arctic is more or less a desert, and the third of an inch of (melted) precipitation shown by the Canadian model is unusual. The Canadian has it in a more condensed area. (I think it may be using the milder air drawn up from Siberia to develop the second storm). Judging from temperatures, all the precipitation is seen as snow. 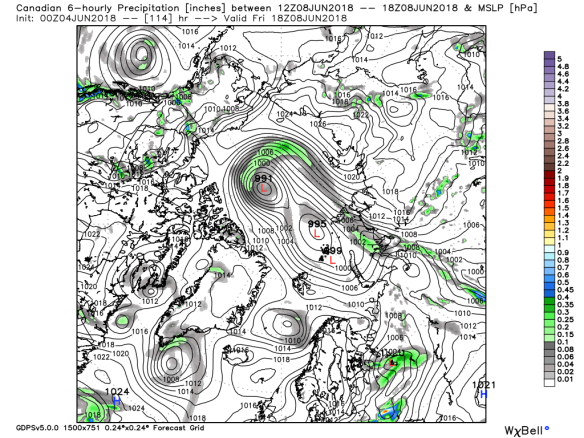 (Thanks to Dr. Ryan Maue for developing these maps, which are available at the Weatherbell site [Week free trial available.])

All in all, I expect this storm will make a complete mess of all the careful calculations of Alarmists and Skeptics alike. Days of clouds and a swath of fresh snow will require a rebooting of “albedo” calculations, to begin with.

Then there is the smashing and crashing of sea-ice. The Pole is not the “ice cap” many imagine, and sea-ice is highly mobile, and becomes more mobile when fragmented by storms to smaller pieces. Judging from the location of the storm, it looks to me like not all that much will be transported south through Fram Strait, but that will have to be watched.

Lastly there are changes in the speed of the melt brought about by the mixing of stratified water under the ice. Sometimes milder water is brought up, when differences in salinity allow warmer water to slide beneath colder, fresher water at the surface, but these conditions vary from year to year. Also it is still early, and the water is still more protected from winds by winter ice (at least until it gets smashed up). Lastly, the inrush of fresh waters from huge, north-flowing arctic rivers like the Lena has only started, and the “lens” of fresher waters by the coasts is not as expansive as it becomes later in the summer.

There is lots to wonder about. One thought that occurred to me is that the power of this storm may be due to the fact the air over the Pole is colder than normal, perhaps brought on by the fading La Nina, and the “Quiet Sun”.

I should confess that the cross-polar path of this storm is making complete mincemeat of my idea that the lagged effects of the La Nina would make the storm tracks more zonal. I assumed the cooler La Nina would lessen the clash between the warm tropics and the cold Pole, but perhaps the “Quiet Sun” perpetuates the clash. Things can’t get much less zonal than a cross-polar storm, and it looks like a “Ralph” (low pressure anomaly at the Pole) which I associated with an El Nino.

Not liking to admit I’m wrong, I cast about for  other factors. One idea that occurred to me is that the “wall” of thicker sea-ice, extending down past the New Siberian Islands to the East Siberian coast, may create colder air above, and a “wall” of high pressure that deflects storms north.

It will interesting to see if the storm produces a dip in the “extent” graph. 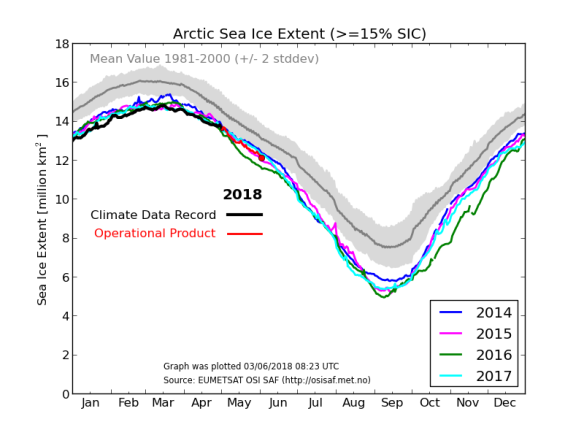 The only thing I’m certain of is that the storm will produce a hubbub at Alsarmist sites. It will be fun to do some lurking.

Worst would be if all the models are wrong, and no storm develops. What fun would there be in that?