The Rutgers graph, which goes back 56 years, shows a disconcerting amount of snow is building in the north, for this early in the season. 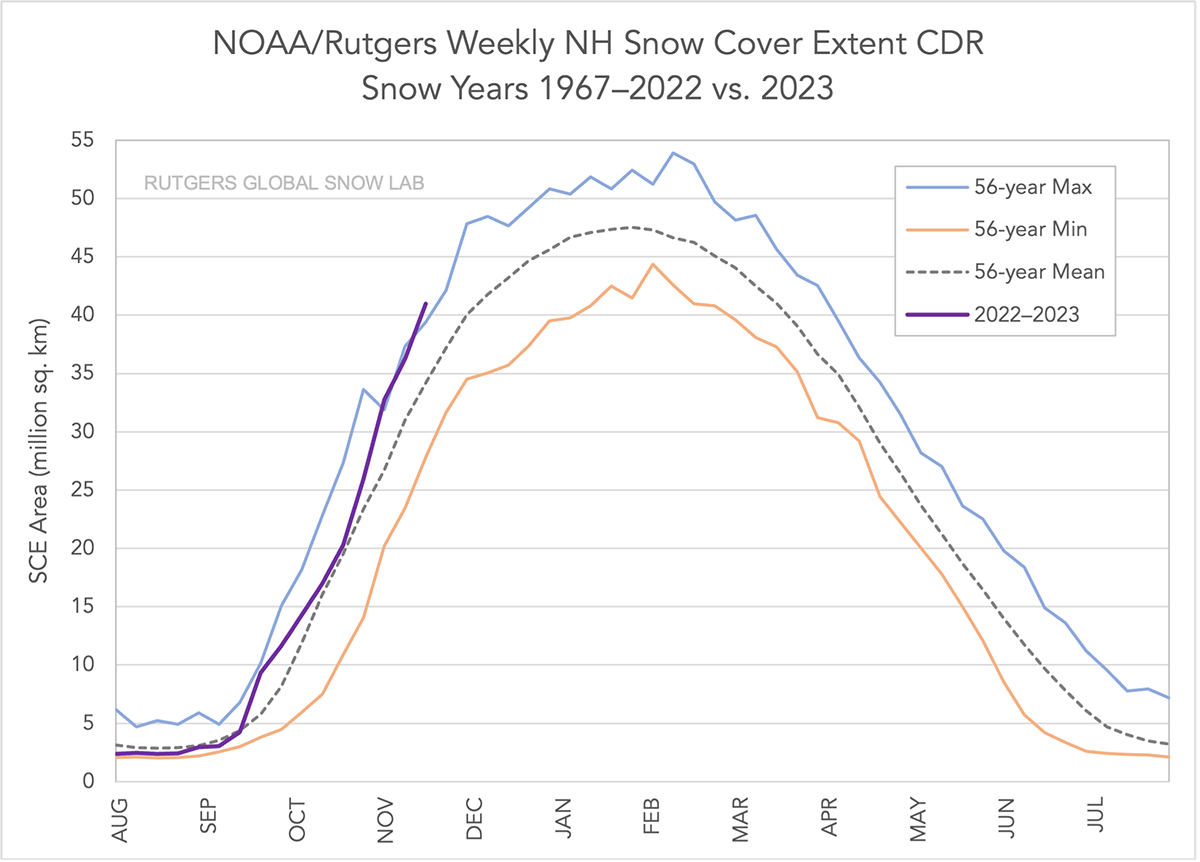 Snow-cover enhances the amount of heat lost to outer space. Locally, after fresh snow, our temperatures can be a good ten degrees colder than just before the snow, when the ground was bare. Currently, where I live just south of 43 degrees north latitude, the ground is bare and we are being lulled by a somewhat easy-going and snow-free December. To our north, however, Hudson Bay is rapidly freezing over, and the vast snow-covered areas of Tundra and Taiga is creating the “Hounds of Winter”, which I expect to soon come howling south. WUWT reported parts of Siberia are already experiencing record cold.

So much of the Northern Hemisphere is land that an expanded, early snow-cover creates cold high pressure, while the North Atlantic and North Pacific are relatively warm. This clash creates amazing gales, bigger and more energetic than most hurricanes. In fact the deepest Aleutian and North Atlantic storms rival great typhoons, and the area covered by high winds is greater. It a good thing these monster storms stay away from inhabited areas (with the exception of Iceland, where the people have to be especially tough.)

The clash between cold land and warm oceans tends to perturb the jet stream. Rather than remaining zonal, (which I prefer because it traps the coldest air to the north), the jet is prone to loop south over land and north over the seas, and be “meridienal”, which creates the greatest arctic outbreaks, and snowstorms in the southern cities. This makes children happy and the adults, (who must face the heating bills and the snow shoveling), a bit grouchy.

The fact the snow cover is at record levels does not bode well for a foolish world which has adopted a “green” policy and now faces a shortage of fossil fuels. I have done my small bit, collecting and purchasing eight cords of firewood to keep those near and dear to me warm, even if there are no deliveries of oil and propane. However I do waste my brain-cells worrying about others, though worry does no good.

I found myself looking back over the years, and recalled that in 2019 my little town went from a brown, leafy, rustling December to 36 inches of snow, in the space of three days. When I looked back at my old posts from that time I rediscovered two sonnets I liked, because they defeated worry. The first was from before the snow fell, and the second was from just after.

With night’s snow fell a silence. It was deep
As the snow was deep; grew deeper as snow
Grew deeper. The world did not go to sleep
But was wary, waiting. I do not know
What it awaited. Anticipation,
Like a small boy restless in a cold bed,
Impatient for Christmas, breathed steam that hung
In the dark stillness. No blue, green or red
Christmas lights blinked. The power was out.
No furnace rumbled and no fridge hummed.
No sledding-hill’s child freed a far-off shout.
What broke silence was me. My fingers drummed
As I awaited the soft light of dawn
And the Power we need to turn back on.