We hear rumors from the south
Of warm winds in Georgia pines
But we keep our skeptic chins
Down in our scarves,
For we’re hardened by the north
And the way that winter whines
As with Jolly Roger grins
His saber carves.

Our spirit starves
As their rhododendrons bloom.
As they frolic in the sun
We trudge the gloom.
As they rhapsodize and gush
We wade the slush.
Don’t speak to me
Of springtime glee.

Where down south ball players practice
Way up north we just do taxes
With our smiles like battle axes.
Where they sunbathe, our hard fact is
We have plum run out of gladness
And know differing March madness.

If you look at the map below you can see how the warm surge of springtime rushing up the east coast of the USA runs into a sort of wall, and fails to make it into New England. I can’t tell you how typical, and how annoying, this is. Notice the innocuous, little low just south of Nova Scotia, supplying just enough kick-back to keep cold ocean air flowing in from the east.

What this means is that instead of warm winds from the south, and balmy temperatures that make even crabby people smile, we get temperatures just above or just below freezing. (On the occasions when we do get a southerly blast it is probable it will be swiftly followed by a front and icy northern winds.)

About the only good thing is the fog, which tends to “eat” the snow. I wrote about why it happens in an old post which has been surprisingly popular over the years, especially in March.

The exception to this rule is when temperatures hover right at freezing, like they have here the past few days. Then the snow doesn’t seem to melt fast; rather it just turns to slush. The world seems particularly unappealing, and I see no children in the playground when I pick up kindergartners. 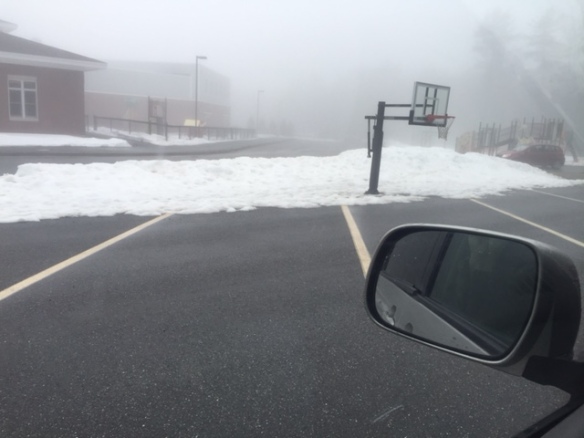 The scenery, as I drive, isn’t at all that inspiring, 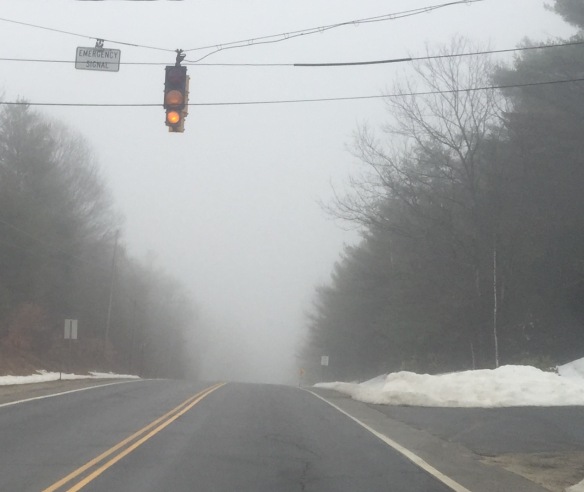 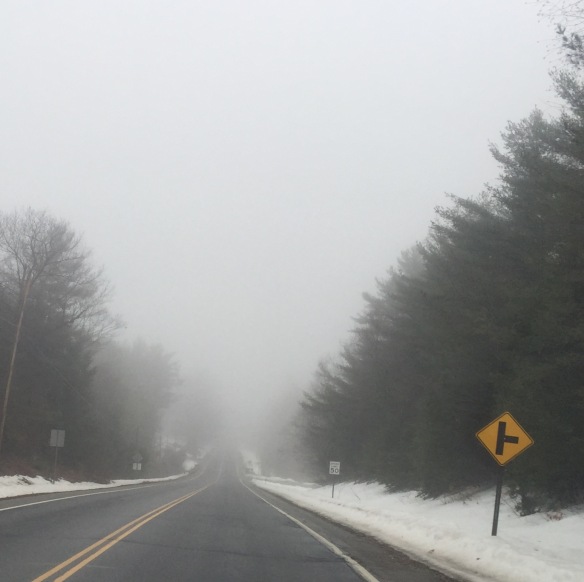 And our own Childcare playground holds little attraction, as it is basically reduced to slush. 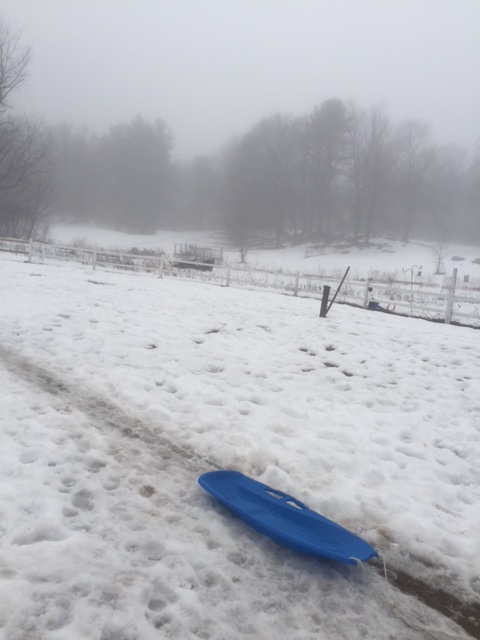 To top it off, my muscles all ache due to the low pressure, and I have a cold, and I could go on and on about all my reasons to feel very different from a gamboling lamb in green, spring pastures.

By the times the older kids got off the school-bus yesterday afternoon I was working on my third degree of sainthood, and then all the boys seemed to be in especially rebellious moods. Only two wanted to go on the scheduled hike, and the rest shoved their hands in their pockets and slouched with sharp shoulders.  They needed only cigarettes dangling from their lips to look like a bunch of bookies. (To be honest, they looked like I felt, which I suppose demonstrates I was only outwardly a saint, and inwardly was a bookie.) I decided to just let them slouch, if that was their desire, and took two for a short hike, and then, as I returned, a slushy snowball whizzed dangerously close to my head.

In the manner of a true saint I patiently explained how snowball fights were against rule #291B,  and then turned to attend to a smaller child, when, Ker-POW!   A slushball hit me squarely in the forehead.

I thought about remaining a saint, and decided against it. Instead I told the boys they had better run, because rule #291B has a sub-clause, 15P, which allows staff to pelt little kids with slushballs, if the staff has a just cause, and getting hit on the forehead is a just cause.

Mind you, I confess there is a schoolmarm who sits invisibly  on my shoulder and advises against rioting. Also I did look over that shoulder to make sure my wife wasn’t watching. Lastly, I am well aware that there is no such thing as an orderly snowball fight, and that any attempts to moderate the fray will be about as successful as they are in professional hockey; sooner or later the fun escalates to a full-fledged fight. In the end I ignored all that stuff, and just did my best to paste youngsters with snowballs in the snoot.

Did they enjoy it? Man Oh man, did they ever! There were only two episodes of tears, (which isn’t half bad, looking back over the years), and in both cases the boys didn’t retire to the sanctuary of the “little kids” (who were watched by the staff further up the hill), but rather soon rejoined the chaos with their tears forgotten.

The odds were twelve to one against me, (after three girls joined the battle because it looked like such fun), and I confess to being mortally wounded on a number of occasions. However I have taken good care of my throwing arm this winter, (after destroying it a couple years back), and I was surprised how much of my old skill returned, once I was properly warmed up. I remembered some of the old tricks, such as lobbing a first snowball in a high arc, and then, while they are still looking up at it waiting for it to come down, throwing a second low-ball in a straight line. (The trick is to have both snowballs arrive at the same moment.)

I remembered the technique of ricocheting a snowball off a tree-trunk, or breaking a snowball into shrapnel in the branches above a target, or the strategy of pretending to ignore someone, and then throwing when they are not looking, or simply looking left and throwing right. I needed all my tricks, outnumbered as I was, with stealthy children creeping up from all sides. When they did nail me, I let loose howls of agony, which they greatly appreciated. When I charged them in feigned retaliatory rage, they fled screaming in sheer delight.

When parents came the kids didn’t want to leave, but eventually it was over. Oddly, I was sweaty but energized. I’d felt old and tired before we began, but felt thirty years younger afterwards. Something that had been withering up in me was cut loose and ran free.

I had a strange sense I had seen this before, many times, and if fact in some ways had seen it every March.

I recalled a half century ago throwing a snowball at a young doctor who was walking home from the market with milk, and how surprised I was that it turned out he had an excellent arm, and could make and throw snowballs at a rate of what seemed like two per second.

I remembered my Dad telling me of an April when the students at MIT were going crazy under the pressure of cramming for exams before Easter break, when there was a late, heavy fall of sticky snow.  Being engineers, they decided to build a wall, and a good place for the wall seemed like across Memorial Drive. (In 1938 there was a far greater lull in the traffic between the morning and evening rush-hour). 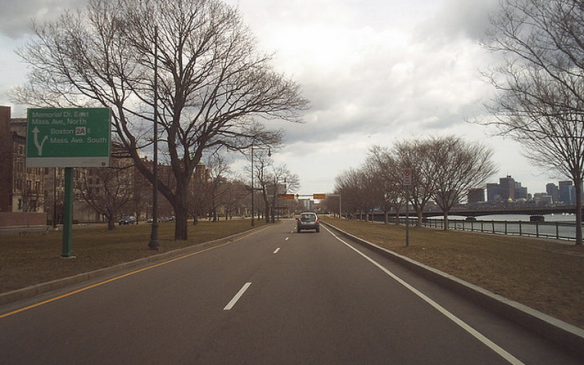 Of course such a fine structure needed to be defended, and when the police arrived they were pelted with snowballs. The police of that time didn’t resort to teargas, and instead replied with snowballs, and apparently were better at battling than the students, who were slowly driven back to their dorms, throwing their final snowballs from upstairs windows. There were no arrests, and afterwards everyone felt wonderfully refreshed.

It is March Madness, and gives the schoolmarm perched on my shoulder something to ponder.

Not all that seems war-like is evil.
Burst free from the landscapes of gray.
Go wild with Dame Springtime and she will
Paint scarlets like dawn breaking day.