I suppose there was no reason April shouldn’t end as it began, with slush mixed in with the raindrops hitting the windshield between swiping wipers. May will be different. Temperatures are suppose to rise from 37°F (3°C) this morning to 81°F (27°C) Wednesday afternoon. We’ll whiplash from winter to summer with no spring.

And a raspberry mist rode the gray twigs of the swamp maples. When you draw close you see it is minute flowers.

I like to point out such details to the children. Often they are oblivious, and walk on absorbed with whatever fantasy they currently are engrossed by, but once in a while I’ll see a child screech to a halt, set back on their heels by the beauty they’re midst.

Beyond doubt this has been the coldest April I’ve seen in many a year, and there is a sort of egotism that wants to use words like “worst” and “unprecedented”. Sadly I cannot glorify in such vanity, for people such as Joe Bastardi (on his blog at the Weatherbell site), have the time to dig deeply, and inform me we are only in third place in the satellite era, for both 1983 and 1997 were colder. Nor can I use the chill to silence those doom-and-gloom Alarmists who constantly bleat about Global Warming, for despite the chill over North America the planet as a whole is slightly warmer than normal.

Sometimes I just shed the tension that seems to walk hand in hand with sensationalism, wherein things must always be “best”, “worst” or “most” to deserve attention. Instead I drop the need to be champion. It feels comforting to just relax, and quietly say, “One more April is in the books.”

For in fact there is beauty to see in every April, whether they are hot or cool, and coolness has it’s good side. I can recall years when the heat had everything pass in a rush, with the daffodils blooming and withering almost before you could see they were there. And one of the saddest springs I remember saw all the trees in my boyhood neighborhood turned from reality to memory, because a heavy, wet snow fell after all the leaves were out, and entire trees were broken down. (May 9, 1977). It is not always good to have the leaves rush to unfurl.

Another day is breaking.

Better to take the days as they come. A day can make a difference, for, though the temperature is again 37°F, today every bough is shining as a white sun crests the hills. 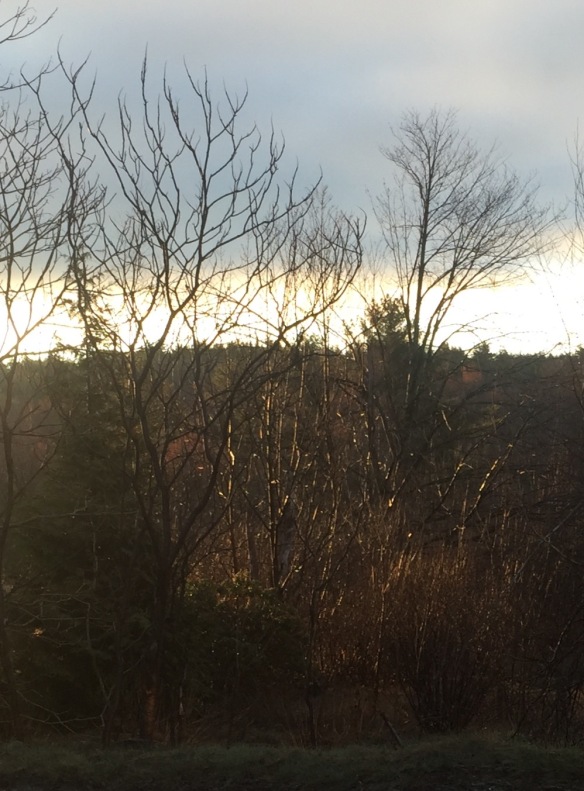 And the daffodils, neither burned by frost nor shriveled by heat, are as perfect as they’d be from a florist’s refrigerator. 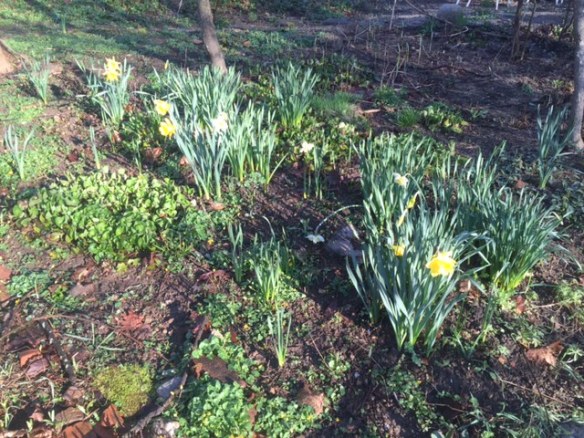 And the invasive lesser celandine unfurls a happy mat where I once had a lawn, petals opening even as I watch.

And even the unkempt grasses where I do have a lawn are shining.