I read an article in a Russian shipping-periodical recently that basically derided Americans for being fools about sea-ice. Once sentence, roughly translated, stated, “Two things that don’t go away in the summer are sea-ice and American’s insistence it will.” This demonstrates that Alarmists are making America a laughingstock.

As Alarmist’s error becomes increasingly obvious the only truly alarming thing is the behavior of Alarmists themselves. They resemble a man at a bar defending his beloved home team, when he has had too much to drink. The actual statistics may show that his team is in last place, but one tends to be reluctant to bring such facts forward, because the drunk cannot be relied upon for rational responses, and is clenching his fists.

It used to be fun to debate Alarmists, because they would bring up actual facts and statistics, and this forced me to think. I was constantly learning things I hadn’t known about oceanic currents and atmospheric circulation and the chemistry of the atmosphere and sunspot cycles and the history of the arctic. Now that seems to have largely ceased, as the responses have degenerated to the level of, “Your mother is fat and wears army boots.” Or even, “Fossil fuel leads to child-porn”:

This could be dismissed as the grousing of a sore loser, or of a dangerous drunk at a bar, were it not for the fact many Alarmists are adamantly prone towards socialist thinking of the sort that allows “purges”.

Some of the most disgraceful behavior seen in human history has involved one section of a society blaming another without much rhyme or reason. Christian Germans fought alongside Jewish Germans in World War One, but after the Germans lost that war so-called Christians blamed the Jews for their defeat, and their society went through a decade-long paroxysm of neighbor attacking neighbors. In like manner Russia took umbrage at its more prosperous yeoman farmers when its socialism led to hunger, and dubbed them “Kulaks” (tightfisted),  and sent hundreds of thousands to Siberia, with a suspiciously large percentage dying before they even arrived in Siberia. Getting rid of the better farmers contributed to one of the worst famines in Russia’s history. Over and over history demonstrates such hateful “purging” behavior proves to be a case of biting-the-hand-that-feeds, and/or cutting-off-your-nose-to-spite-your-face, and such atrocious behavior towards neighbors should be resisted wherever it appears. Even if such wolves don sheep’s wool, point out their teeth; resist the so-called “resistance”; point out when so-called “Christians” are not Christian.

Partially this involves firmly pointing out when Truth is obfuscated with the shallow, hypocritical  deceits of doublespeak.  This is a topic that could go on for 10,000 words, but it boils down to being clear and specific, and not getting swept up by waves of generalization. For example, when I speak of the “elite” I need to be aware some leftist protesters don’t have a penny to their name. In like manner when leftists claim they are the “resistance”, they need to be asked to be specific about who exactly and what exactly they are “resisting”. For another example, the word “liberal” means “generous”, but some so-called “liberals” fail to qualify, for what they give is never their own money but instead is other people’s tax-dollars. If you are truly generous your wallet should get thinner, but their’s get amazingly fat.

A second way to avoid the socially disastrous “purge”-mentality is to reduce the other’s arguments to absurdity.  This is particularly easy to do, concerning sea-ice. Just as it was an embarrassment to Democrats to have protesters outside their 1968 convention chanting, “The whole world is watching,” it will be equally embarrassing to have protesters outside the 2020 convention chanting, “The whole world is laughing.”

Why is the whole world laughing? Because the doom-and-gloom Alarmists stated the low sea-ice of 2007 was the beginning of the end, and the Arctic would be open water by 2012. They got very excited in 2012, for that was a very low sea-ice year as well, even lower than 2007, and they could shout, “See?!! See?!! It’s happening!!!” The problem was, it wasn’t. The Arctic was nowhere near ice-free in 2012, which proved their 2007 prediction incorrect. They should have been hanging their heads, not dancing in glee. And since then the sea-ice has only increased, which is in direct violation of the “Arctic Death Spiral” theory, (which states decreases should “accelerate”, due to changes in “albedo.”)

It is now seven years since the arctic was suppose to be ice-free. Can you believe it?  (Time flies when you are having fun.) Seven years! But will the Alarmists stop their antics? No. Now they are saying it will be 2030 that the Arctic will be ice-free. I likely won’t live so long.

At what point do you stop taking such panic-prone people seriously? Up to a point you try to be polite, but its hard when they are never polite in return, and instead use the word “Denier” like Hitler used the word “Jew” and Stalin used the word “Kulak.” Eventually you simply have to be impolite, and just laugh in their faces.

Reality speaks Truth, and the facts say the sea-ice has been low because the AMO has been in its “warm phase” for most of our adult lives.  Now the AMO is hithering and thithering about the neutral state, and will perhaps tip into its “cold phase” within five years.

The reduction of sea-ice extent this spring has been fairly typical for recent years. There is no sign of an accelerating “Death Spiral.”

You’ll have to forgive me if I don’t get as excited by this graph as I used to get. I used to get excited if it dipped into “lowest-for-date” territory, but after following this graph for approaching two decades, (and also studying history), I’ve come to see the behavior as typical for a warm AMO. In other words, it is pretty humdrum. At my age I have to increasingly chose my battles, and it isn’t worth my time to bulge veins in my forehead about what is humdrum.

The “area” and “volume” graphs are also fairly humdrum, but the temperatures-above-80-degrees-latitude graph is worth a comment.

An honest answer is, “I don’t know.” But I have noticed changes in the “pattern”. There has been high pressure at the Pole much of the spring, with little sign of the anomalous low pressure I used to call “Ralph.” The low pressures have politely circled the Pole down near the Arctic Circle, behaving themselves and obeying the textbooks.

One effect of having high pressure at the Pole is that there are fewer clouds and more sunshine, and, when the sun is up 24-hours a day, this may explain the temperatures in the above graph moving from a degree below normal to a degree above normal. At the same time I need to be cautious that I am not doing what Alarmists do: Deny the facts.  The fact is that I assumed the “Quiet Sun” was what led to the cooler summer temperatures at the Pole. My assumption is shot full of holes, so far, and I will be watching temperatures at the Pole carefully, as Spring gives way to Summer.

The high pressure over the Pole has extended south as a “blocking high” over Greenland, which has led to a loopy jet-stream bringing colder-than-normal temperatures in sub-polar regions, especially the Central USA and Northwest Europe. This blocking high will also lead to a lower “ice mass balance” in Greenland, but this is not due to melting (so far in the spring) but rather is due to much less snowfall. (It is important to be aware of such changes, as Alarmists are prone to cherry-picking data; they didn’t like to bring up Greenland the past two summers when the ice-balance was increasing, but the subject will likely be brought up this summer, with ice-balance decreasing.) 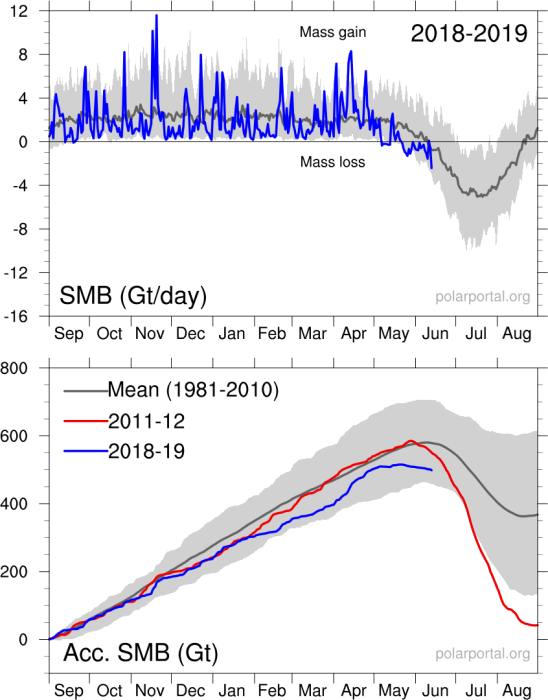 Currently the low pressure systems rolling around the periphery of the high pressure squatting on the Pole are becoming a bit larger, and the one between Western Russia and Franz Josef Land has been wobbling east in a manner that encroaches upon the Pole, and is even a little “Ralph-like”. (Typical; no sooner do you figure out a pattern then it changes!) A smaller storm sits in the Canadian Archipelago, and the High Pressure is reduced to a weak ridge over the Pole.

The lows rolling along the north coast of Eurasia have pushed a lot of sea-ice north out of the Kara Sea, and then west and then south into the northern Barents Sea. As always, it is amazing how mobile the ice is. After a fuss about there not being enough sea-ice against the east coast of Svalbard for polar bears, a great deal crunched south, not only against the east coast but even into the west coast regions of Fram Strait, usually kept open by a warm tendril of the Gulf Stream.

There has not been so much “wrong-way-flow” in Fram Strait as last year, and increased amounts of ice flushing south should reduce the volume of sea-ice in the Arctic but may increase the cooling of the North Atlantic.

Across the Pole the extent of sea-ice in Bering Strait has been less, as sea-ice was pushed north there. In terms of the Northwest Passage, both the eastern approach from Baffin Bay and the western approach from Bering Strait seem to be opening up, so I have hopes we may gain some actual pictures from the adventurers who have the time and money to attempt the passage. But I fear they may be discouraged by a major clot of ice persisting in the central passage around 100 degrees west latitude.

It is interesting to note that semi-circle of thicker sea-ice created by the northward push of sea-ice in Bering Strait during the winter. Such features tend to persist, and are helpful when attempting to gauge the flow of the ice during the summer. Often ice-watchers think ice has melted when it has merely moved.

It’s also interesting to see the ice seems to be nudging the coast of Alaska at Barrow. As Barrow is one of the few places left where we have an actual webcam, I thought I’d take a look, and the midnight sun revealed….a wall of fog. Oh well, we’ll wait on that.

Without any buoys with webcams, or any adventurers (so far), there is little eyeball evidence to use, assessing the situation. One can track the paths of buoys without cameras, and surmise the sea-ice is not being flushed from the central arctic:

However I must confess the above squiggles sorely lacks the fascination I derived from the old buoy-webcams. I miss them greatly. If anyone discovers any new ones, please tell me, and I’ll jump for joy. With the hot days of July approaching, views of sea-ice are wanted.

The only other news is that the Hudson Bay thaw has just begun in the Northwest, with the ice still quite thick to the south. While the sea-ice is less in areas of the Arctic Sea’s periphery, it is quite compacted in the Central Arctic.