We’ve had a few glory days, when the sun bursts out and the world is so abruptly beautiful that you want to skip and sing, but for the most part our spring has been cold and wet. It might even be snowing when I get up tomorrow morning, with temperatures down around 36ºF. And it’s May 14th!

Just because the weather is drab, it doesn’t mean we can’t keep busy. The little fuzz balls that were chicks have graduated and looks like hens, and are too smelly to keep inside, though it’s still too cold at night to completely wean them from the heat lamp inside. So in the morning we move them out to their new pen, and in the evening have to move them back. Ever herd hens? It keeps you busy.

Now, however, such scratching and pecking is less welcome, as it would break off the tender shoots of sprouting seeds. This is especially true of potatoes. Chickens can’t be allowed in the potato patch until the shoots are around six inches tall. Then they abruptly go from being a foe of potatoes to being a friend, because they hunt potato beetles.

Last year I had no chickens, and because I failed to hunt and squash potato beetles on a daily basis, my crop was poor. You can just leave town for a few days, and a few bunches of innocuous-looking, orange eggs, each egg about the size of a fat period on a page, on the underside of a leaf:

turns into a hundred disgusting, slimey larvae, which grow with amazing speed and can completely defoliate a plant by the time you return to town.

Then these larvae turn into the more attractive adults, which lay lots more eggs. 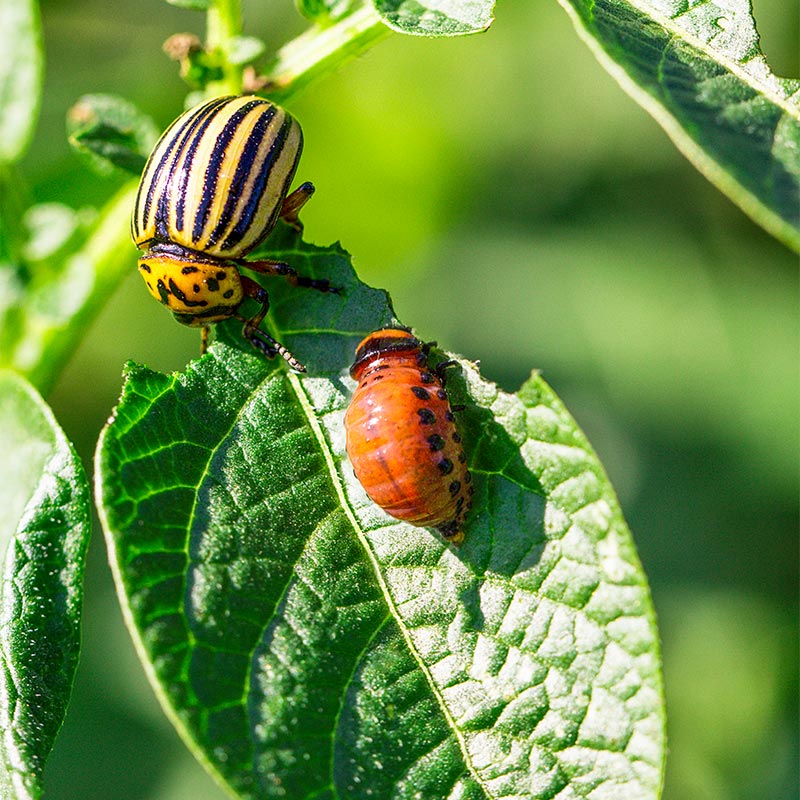 A generation of beetles takes about a week or two to go through its life cycle, and a few beetles can become a major infestation with surprising speed. I witnessed this last summer. Then, because your crop underground depends a lot on how lush the foliage is above the ground, you shouldn’t expect much when you dig.

The trick with potatoes is to feed them a lot, and make sure they don’t get dry in the days when the sun bakes in July. They are heavy feeders and thirsty plants. For the most part you get most of your potatoes by the seed-potato that you plant, though I have had a little success getting some extra potatoes by hilling them early, and deeply. If you keep them moist and add lots of manure and wood-ash to the soil they grow so quickly they don’t get “scabs” on their sides. (“Scabs” are worst when the soil gets too dry, but one very rainy year the soil basically turned to mud, and my potatoes turned to slime, so I  suppose it is also possible to over-water.)

I used to cut up my potatoes, with an eye on each piece, and then dust them with sulfur or fungicide and let the wound dry in bright sunshine, before planting, but more recently I seek the smallest seed potatoes in the bin where I buy them, and skip the bother of cutting them. (I have a theory cutting in some way traumatizes the tubor, and makes bacterial infection more likely, but the truth may be I am more lazy as I get older.) I look for potatoes about the size of an egg. Just because you plant a small potato it doesn’t mean the potatoes you harvest will be small. The potato’s eventual size seems to involve how well fed and watered they are, and how few potato beetles eat the leaves.

Over the years I have learned small kids at our Childcare are fascinated by planting and later harvesting potatoes. Something about digging them in the late summer and fall is completely engrossing, and the “older” children of four and five spoke with great authority to the younger ones aged three about the massive crop we would harvest in ten weeks (blithely unaware last year’s crop was pathetic,) as we planted them in the cold drizzle.

Perhaps the best thing was that we forgot it was cold, and rainy, and that it had been days since we’d seen the sun.