The blogger “Nigel” (AKA “Jasbond007”) (I assume) has done me a great favor by sharing pictures he captured from O-buoy 14, in the “comments” of my posts. In case you missed his offerings, I think it is well worth repeating the links he gave me to batches of pictures at”Flikr”.

Nigel has the selective eye of a good observer, and it shows in other pictures he shares here:

I have asserted elsewhere that a good observer may not have any degrees in Arctic-Sea-Ice-Science, but still have value because they may catch something others overlooked. They may not be a “professional witness” in a court of law, but they still have value and even power, as a “just plain witness.” To be a witness is enough, and older scientists of the better sort have learned to cock an ear when someone who knows next to nothing about the science they study shares an insight. Einstein was said to question children, when adults utterly bored him.

In my case I am just too busy with boring stuff of little consequence, like the IRS of the government, and various inspectors who make life unsafe claiming they are all for insurance, when they are after insurance payments, and are bleeping gangsters resorting to extortion. Such imbeciles have no idea what they miss by ignoring the subject of sea-ice far away. But (sigh) I have to deal with them,  and this leaves me with too little time to study sea-ice around the clock. There are terrible gaps in my watchfulness. For this reason I am hugely grateful that other observers are watching, and see what I have missed. For example, I completely missed what Nigel saw, when O-buoy 14’s unprejudiced eye glimpsed Melville Island in the distance. 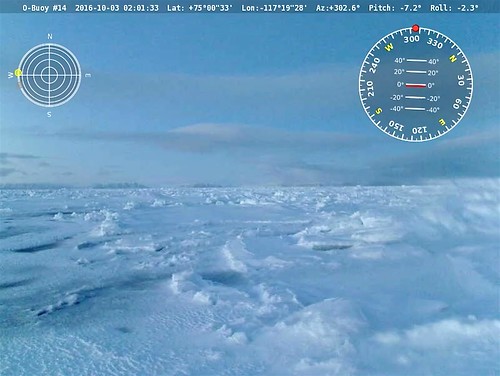 Furthermore, other witnesses take things one step further, and notice what I fail to notice even when I look at the same pictures they do. For example, Nigel notices how high up the camera is, as O-buoy 14 is prepared for operation back in 2015. It is at the very top of the buoy.

And then consider that same camera, well over the heads of those two mortals, was too low to picture a polar bear’s head, and only caught his shoulder:

Even if you assume, (as I assume), that the yellow part of the buoy in the first picture has melted down to the level of the ice, the bear still must be far taller than the two men deploying the buoy. It gives me pause. Those fellows had guts to do the job they did, and should be named, in recognition of their courage: (Mike Dempsey and John (Wes) Halfacre).

This consideration just shows you what a witness can come up with, just being an observer and saying what may seem obvious, but what others may overlook. This is one thing that made the O-Buoy project so invaluable. (And made the other “North Pole Camera” project invaluable as well.)

If you return to the first picture you must note the solar panels are black. Besides absorbing sunlight for energy they absorb heat, and on calm days this creates a pocket of warmer air around the buoy. It is a sort of microcosm of a UHI (Urban Heat Island). (I call it a BHI [Buoy Heat Island]). The thermometers attached to a buoy may be recording an elevated temperature, especially when winds are calm. This elevated temperature is then fed into a computer which obeys the principle of GIGO (Garbage In, Garbage Out)  and then produces a map of polar temperatures. A lot of hard-working scientists worked overtime to produce the map, and they do not take kindly to some bumpkin like me coming along and stating, “Sorry, but your map is wrong.”

Don’t get me wrong. I don’t want to abolish thermometers or satellites or any nonsense like that. I just feel cameras are a wonderful way of double-checking. They are an invaluable addition to other instruments. The fellows who undertook the visual aspect of buoys deserve great praise. (The name Todd Valentic appears as a credit to the development of the O-buoys.)

Sadly, I am afraid the fellows who developed the cameras don’t get the credit, or the funding, that they deserve. Alarmists don’t like them because cameras did not show the political idea of vanishing ice that Alarmists desired. Skeptics don’t like them because billions have been spent on the Alarmist agenda, and they are sick of the misappropriation of funds. However I believe cameras are worth every penny they eked from the squandering.

Why? Because the eye-witness has value. In our court of law you can have an IQ of sixty, and your testimony still has value. The polar cameras have been a wonderful check-and-balance to those who spend too much time at computers, and never stick their noses out of doors.

For seeing is believing.

1 thought on “ARCTIC SEA ICE –In honor of O-buoys–”