It is difficult to describe how tantalizing spring can be, this far north. It can be a terrible tease. This year the flirt provoked us with an amazingly kind end to February, with even the ponds melting. I was thinking of fishing with the children at our Childcare on the first of March. 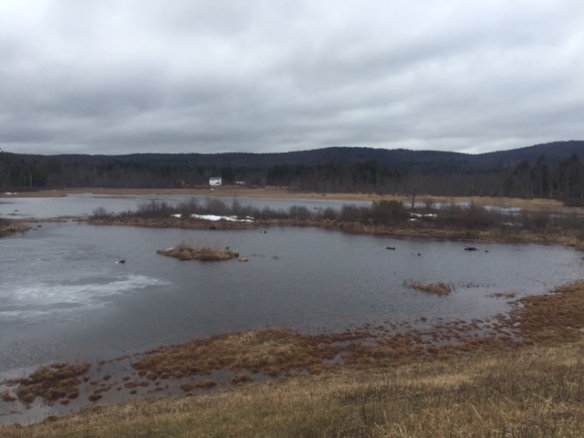 Yet at the end of March things had gone backwards.

If you zoom in on the picture you can see it was not merely humans who were fooled. 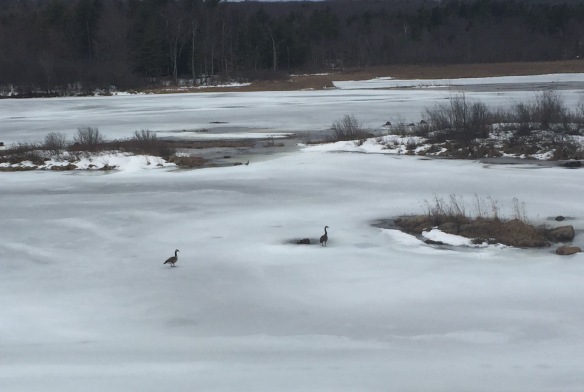 This is a particularly stupid sub-species of Canada Goose, which we have accidentally bred in our area by having water hazards at our golf courses. They are around two pounds heavier than the natural sort, that migrates up to Canada and down to Chesapeake Bay. This sub-species can’t be bothered to migrate far, and upsets people terribly by dying in droves when winters are particularly harsh, when they hang around warm outflows of power plants or sewage treatment plants, rather than flying south to look for open water. Then certain people feel compassion and feed them, while other people, who want them dead, watch and are irate.

Why should anyone want such beautiful geese dead? Well, they eat grass, lots and lots and lots of grass, (they have to eat a lot because grass has less protein than grain or fish), and this means they also produce lots and lots and lots of slimy green droppings. Golfers don’t like this, and people with lawns by the water don’t like it either. But it is illegal to blast them, out of season, and also they are stronger than they look; they can break your arm by beating their wings if you grab one.

In any case, this particular pair arrived on February 28, and cannot understand why the ice has been growing rather than shrinking. Are not the days getting longer, and the sun getting higher and stronger? (I’d show them my weather maps, but they might break my arm.)

I hear the crazy crying of flying geese
And look up through flocking flakes of snow,
And part of me yearns for the yearly release
From the shackles of cold, yet I know
All too well how the Northern Trickster flirts
Worse than the worst girl I knew back in school.

You want to plant seeds so badly it hurts
But if you attempt it you’ll look like a fool
So you wait, and you wait, and wait some more
Until you feel you are losing your mind.

The crazy geese cry in the sky and soar
As bitter flakes sting my weeping eyes blind.
Will Savior Spring ever cut cruel shackles loose
Or will I just wind up an old, silly goose?

One thing I try to remind myself is that I was born here, and am accustomed to the torment. I once worked as a landscaper for a very warmhearted old lady who was born in Virginia, and it drove her half mad not to plant flowers in March. One April, (1989), we had a spell of hot days at the start of the month, and I had to practically tie her down to keep her from planting tomatoes. I think she was on the verge of firing me, when the weather reverted to a bone-chilling rain that had some snow mixed in, followed by clearing and a sharp frost that would have killed tomatoes. I figure if that lady could take that spring,  I can take this one.

Despite the cold breezes the sun is so high that, when it has been out, it has made steady inroads on the nearly two feet of dense snow we got two weeks ago, and again patches of leaves and stone are peeking through on south-facing slopes. It is interesting how some kids gravitate to those places even on gray days.

Today the bright spring sun in blue skies made further inroads on the snow-pack, and I noticed daffodils poking up in the south-facing garden. 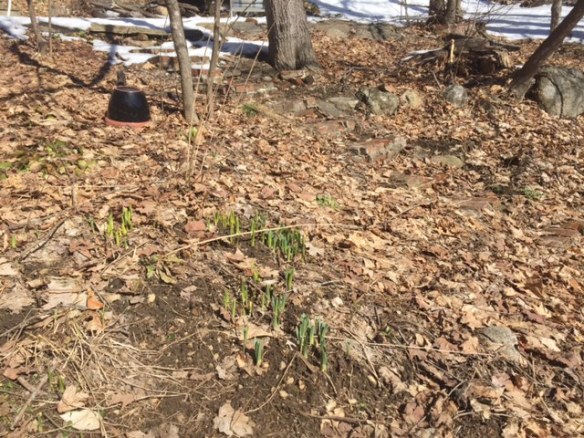 Yet the forecast is for them to be covered by a foot of snow and sleet by Saturday morning. It seemed impossible. The sun is as high as it is in early September, when most of the leaves are still green. Out of the wind it was warm on my face, and some of the kids got a touch of a sunburn, but then, in the afternoon, abruptly only the sky to the east was blue. 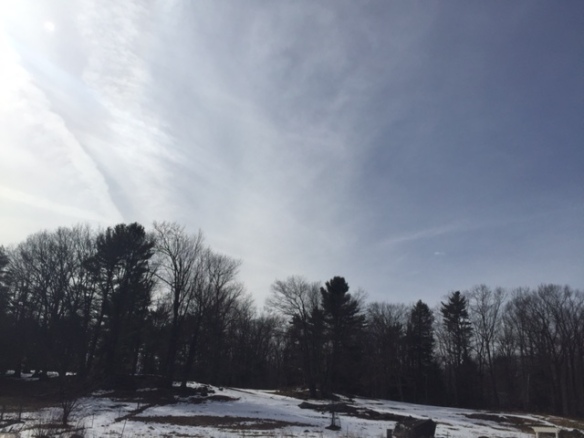 I figure I might as well document the event with updates, like I did the last storm. I still have the hope it may all change to rain. The evening radar only showed snow way up by the Great Lakes.

While the weather map shows the storm to the west has a core of summer heat, complete with thunderstorms and tornadoes, it is running up against a Canadian high pressure to our north, which has been pumped up and nudged south by a gale out in the Atlantic (right margin of map) which actually sucked what looked like a tropical storm into its guts. Therefore it will be a battle between winds coming down from Labrador and winds coming up from the Gulf of Mexico.

Today began with a frosty low of 26°, rose to 45° before the clouds moved in, and has now slumped back to freezing. (It is murder on weathermen to forecast whether precipitation will be rain or snow if temperatures are right at freezing.)  The barometer has crept up to 30.02, but is fairly steady.  See you in the morning.

Just before sunrise at 6:30 the entire landscape turned a shade of shocking pink, and then faded to an orange glow to the east.

All the work the sun has done to bare the ground is being undone by a steady fall of light sneet (halfway between sleet and snow.)

MORNING MAP AND RADAR  (Notice how as soon as the rain moved into New England, it turns to snow.) (Out west Denver’s getting snow as well.)

Temperature 32° Barometer 29,95  Moderate snow. Light northeast wind. Around an inch and a half of snow in the pasture, but the sun is so powerful it melts the roads even through the clouds. They are merely wet, with some slush under trees. As soon as the sun goes down the roads will worsen. (Rain made it up the coast to South Boston for a bit, but it looks like they’ve gone back to sleet now). 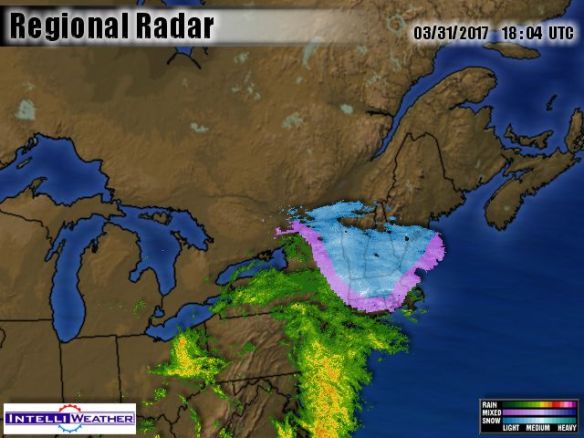 Joe D’Aleo has some interesting graphs on his blog at Weatherbell, produced by Dr. Ryan Maue. They show the change in temperature in the atmosphere for the next few days. Ground level is to the bottom and the future is to the right.  What is shows is warmer air moving in aloft tonight. What is interesting is that it is above freezing in Worcester, an hour south of here, which will likely bring freezing rain or ice pellets…

…yet an hour north of here in Concord the warm occlusion is below freezing as it passes over, which should keep the snow as snow.

As I am half-way between, what I do is flip a coin.

It’s been the typical sort of chaotic day storms generate, with all sorts of extra little chores to do to be ready in case the storm shuts things down. (I have a superstition that a storm never shuts things down unless you forget to do these chores.)

The truck had a dead battery so I used the 1997 Volvo to haul a load of wood for the porch, in case the woodpile gets totally buried. 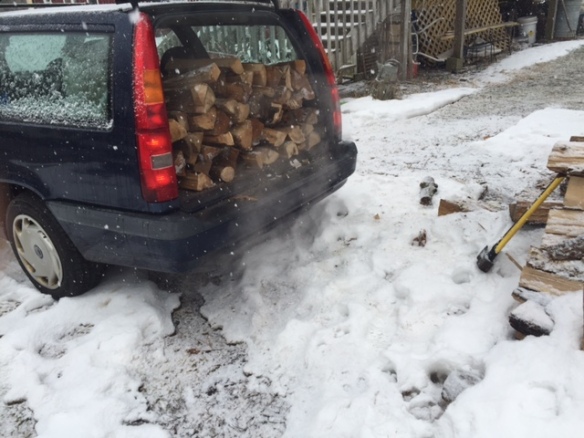 And got the snowblower all gassed up and its electric starter plugged in for the clean-up tomorrow morning. 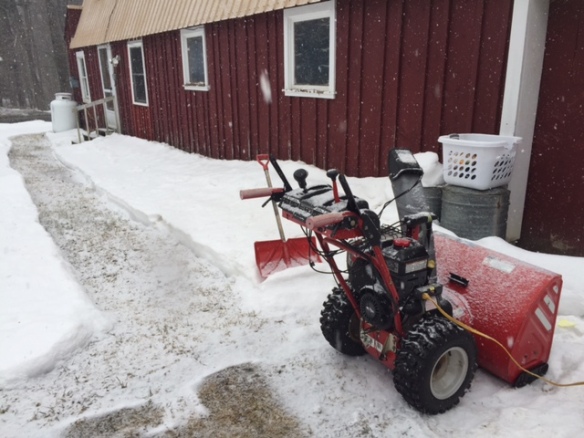 And rushed around getting things done before the slush got too deep on the roads.

As the snow got deeper trucks began to bog down in the snow.

So we had to fight back against the sky. 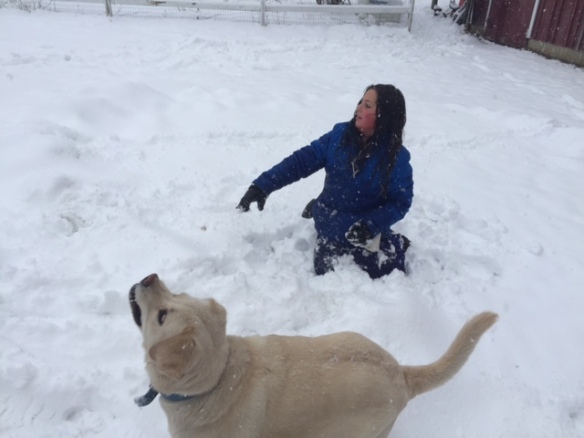 But the enemy sent in reinforcements

So the wiser old women retreated indoors to play Bingo in the stables. 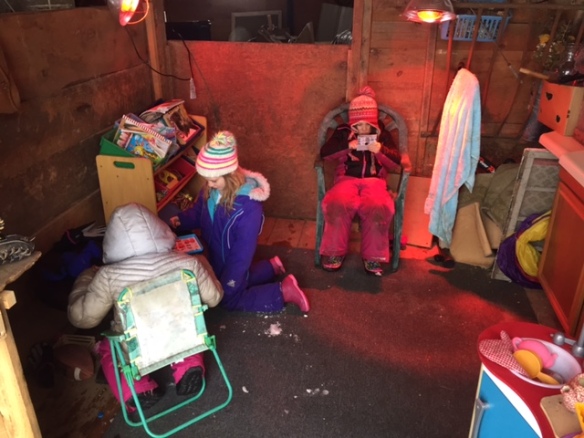 Meanwhile the goats complained it was too muddy in their hideout under the barn.

So they bashed a new entrance to the stables in the rear, and trashed the place 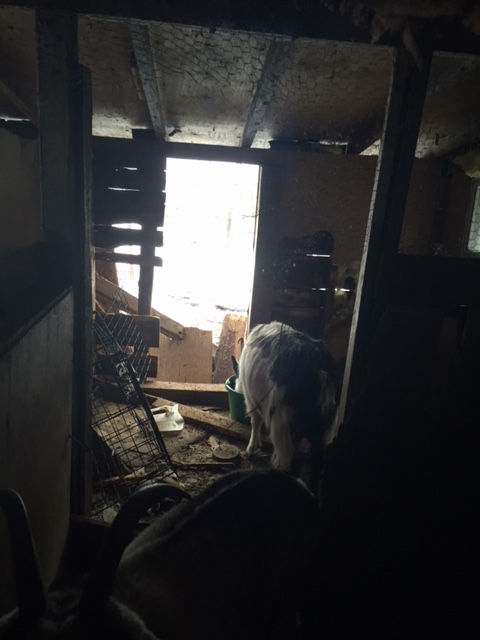 And then implored me not to turn them into goat burgers. 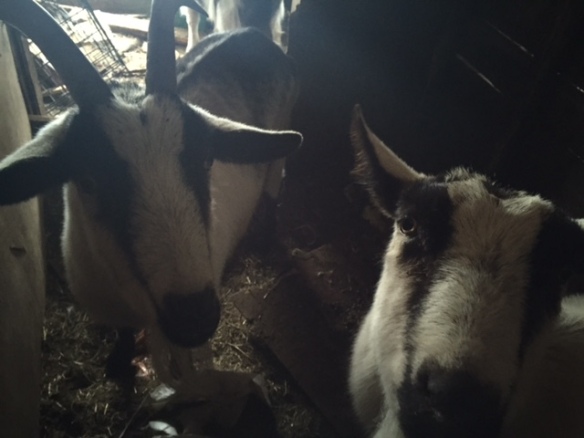 Nothing to be concerned about here, folks. Just your typical day on a hardscrabble farm.

The maps show high pressure remaining stubborn over Maine, forcing the storm to redevelop on the coast of Virginia.

The radar shows the rain-snow line making no progress to the north, though sleet does seem to be mixing in more outside my front door. 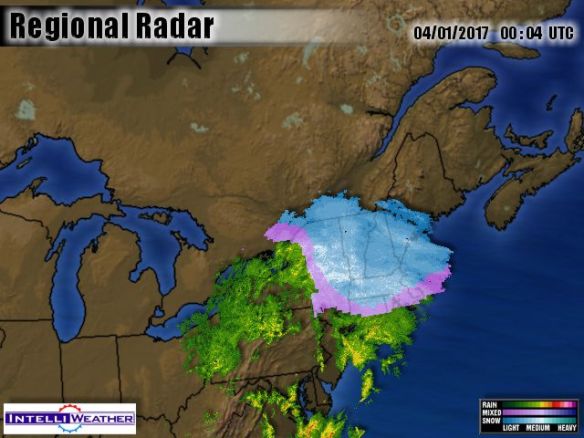 Dark purple daybreak. I’m glad it is a Saturday, and I don’t have to open the Childcare. 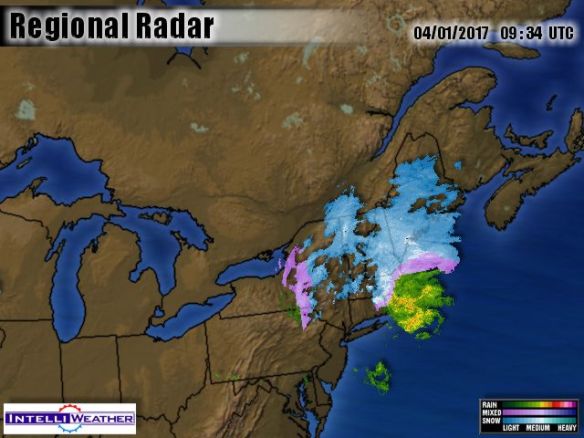 …as the storm stalls, or only crawls. Looks like a dark day, for April.

Groan. What a royal pain cleaning up that snow was. It was something like glue mixed with cement, and the augers of my snowblower kept winding up like this: 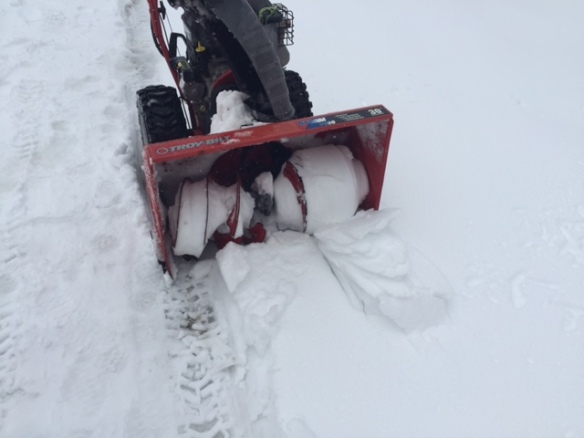 It was five inches of wet snow atop two inches of drenched sleet, and packed to something close to ice with little effort, so where the plows passed by on the street a wall was raised that the snowblower quailed at, like a hamster trying to gnaw through granite. I was overjoyed to see my eldest son drive up with his big plow to clear the entrances for me. But some places he cannot go. For example the snow slides off the new barn’s snow-shedder roof… 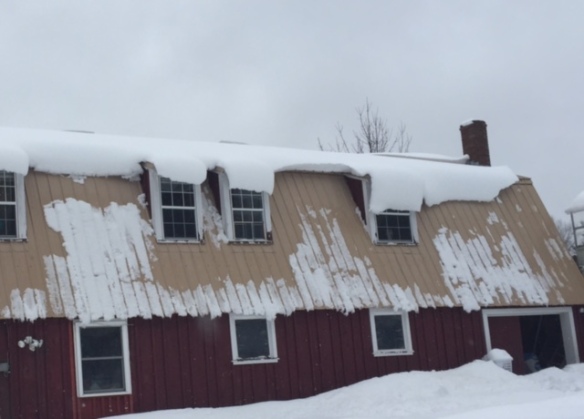 …And packs this stuff a plastic snow shovel can’t dent…. 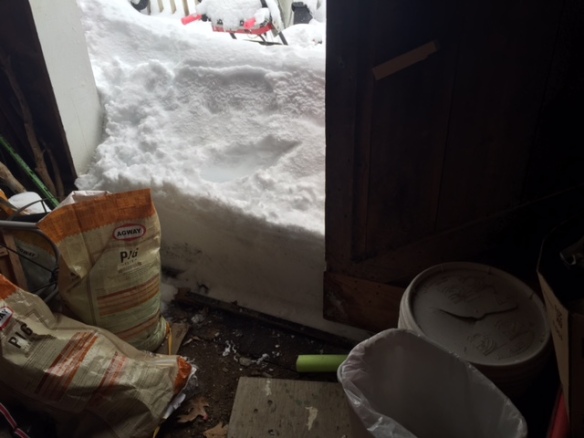 …and makes we want to wait for a warm spell to just melt the stuff.  Unfortunately this door faces north, and won’t melt quickly, so I’ll have to use my pick ax tomorrow.

(This is why people charmed by New England move back south, after a couple of winters.)

Anyway, here’s an “after” picture, to compare with a “before” picture above.

The barometer is in no hurry to rise, at 29.84, with the temperature at 30° at 10:00 P.M. After 36 hours the snow finally faded away towards sunset, and Radar shows it moving away northeast. 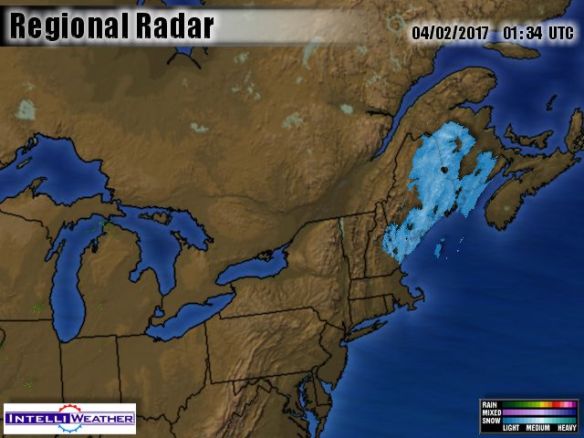 The map shows the storm didn’t get as big as some do. So there’s something to be thankful for.

The forecast is for temperatures in the high 80’s by the end of the week. April Fools!

Actually that was 1989. Look at the first week:

I can dream, can’t I? (The reality is we have another storm coming Tuesday, hopefully rain, but with temperatures too close to freezing for comfort.) (Rain will keep me indoors and encourage me to do my taxes.) Currently the next storm is down in Texas.