In my work with small children I’ve become aware that they test their limits, and therefore will test the limits of my patience. It is as if children want to see if they can wear you down. My advice to parents is to chose your battles, and then never give in. If you give in then the child learns that wearing-you-down is a good strategy, and does so with increasing frequency. (On the rare occasions when the child is actually right about something, and not merely trying to get their own way, make them wait as you reconsider; pretend to consult an expert on your phone, and so on; and then make it clear that the final decision is yours and not theirs.)

I find the same is true with politicians. They too try to wear you down. They too want to get their own way. Often they employ what is called “The Big Lie.”

A big lie (German: große Lüge) is a propaganda technique. The expression was coined by Adolf Hitler, when he dictated his 1925 book Mein Kampf, about the use of a lie so “colossal” that no one would believe that someone “could have the impudence to distort the truth so infamously.”

“If you tell a lie big enough and keep repeating it, people will eventually come to believe it. The lie can be maintained only for such time as the State can shield the people from the political, economic and/or military consequences of the lie. It thus becomes vitally important for the State to use all of its powers to repress dissent, for the truth is the mortal enemy of the lie, and thus by extension, the truth is the greatest enemy of the State.”

A person who loves the Truth, and who also recognizes that straying from the Truth leads to no end of needless misery, finds the above statement of Goebbels vile and appalling. One refuses to salute the lie, as a lone man refused in this famous picture. 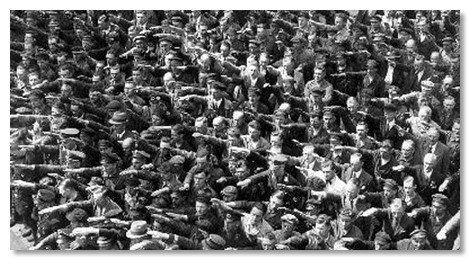 It is interesting to focus in on the man, (whose wife was Jewish, and later died in a concentration camp, as did the man, though their child survived), and see the reactions of the men behind him. He was creating a stir, and having an effect.

It is not comfortable to be in the shoes of such a brave person, yet all who have pointed out  the flaws in the idea of “Global Warming” have stood in those shoes, for nearly thirty years, (if you take, as a “start date”, Hansen’s testimony before Congress, on June 24, 1988.)

People who have criticized even minor aspects of Global Warming have seldom had the opportunity for adult debate, and rather have been marginalized, ostracized, mocked and derided, falsely accused of being bribed by “Big Oil”,  denied promotions and funding, and this treatment has been a pain that has continued on and on, and grown worse as the “Big Lie” became more and more obvious, as more and more studies had to be hidden because they countered the balderdash, even as an entire generation of children was brought up being fed the lie like pablum.

One false factoid that always has made me wince is the “97% -of-all-scientists-agree-Global-Warming-is-real-and-a-man-made-problem” lie. Even the most precursory look at the various polls involved revealed the subsets they chose to use excluded nearly all possible disagreement.

However the fact the factoid was false didn’t stop, or slow in the slightest, our former president and former secretary of state from hauling out the 97% factoid like a stale joke, raising an index finger, and pronouncing the factoid like almighty gospel.

Their behavior made me cringe, as did the fact many in-the-know politicians were quite aware Global Warming was balderdash, as a serious threat, yet said nothing. When the former president mentioned “Climate Change” in a recent State Of The Union address, there was a palpable murmur of giggles through the audience. It was as if many were in-on-the-secret but going-along-with-it. As a lover-of-Truth, I watched with a sense of repressed horror, because such behavior on the part of public servants seemed a gross betrayal of the trust which the public has (or had) in their leaders.

I also felt pain because so many young school teachers basically teach from-the-book, without doing a great deal of research on their own, and when they were handed a book that stated that 97% of all scientists believed Global Warming was a serious threat, they trusted the book. They taught what they were told to teach, innocently becoming part of a lie.

But what hurt worst was the effect the lie had on a generation of children, especially because it was always stated the lie was “for the children”, until the very phrase “for the children” became synonymous with gross hypocrisy.

Rather than nourishing a love of nature, children feared they were breaking it. As a person who runs a Childcare dedicated to increasing children’s awareness and love of nature, this was especially obvious to me. I had to push past the preconception that walking in the forest would kill the moss you trod upon, and to replace that dread with the sense the Creator created creation because He loved us; creation was for us; it was a wonderful landscape-painting where we could walk through the frame and into the picture, with the Creator holding our hand and saying, “Do you like my painting?” The lie stated otherwise: That we ruined everything we touched, and that we should be banned from all involvement.

And so the years passed, one after another, with the pain going on and on and on. Every time I tried to point out the lie I faced cruel accusations, was called a “denier” and worse, and even read that “deniers” should be locked up, or shot. Added to my pain was an element of increasing fear.

And then, yesterday, a new president walked into the white house, and immediately removed references to Global Warming and Climate Change from the White House web-page.

I can’t describe how odd it feels. The pain is gone.

It’s weird how easy it seemingly was. It is like having a headache that goes on and on and on, until you finally take an aspirin, and then, bingo, the pain is gone.  And you think to yourself, “Why didn’t I do that before?”

Please forgive me for grousing just a bit, for we’ve had the aspirin all along. The aspirin is Truth, and I’ve been prescribing it for decades.

40 thoughts on “DELIVERED OF A LONG PAIN”