As the sun beams down for twenty-four hours a day in the arctic, the Pole simply cannot get as cold, and the clash between the arctic and the tropics grows less. Not that the clash can’t still generate notable storms, but they grow less common. In fact spring is kinder than the autumn, because in the fall the abrupt end of all sunlight, and the cold which sunlessness creates, clashes with waters and landscapes that retain and “remember” the summer warmth, and such clashes can be extreme. In the spring the abrupt cessation of darkness cannot create such a clash, for the gradually warming arctic is rubbing against waters and landscapes that still retain and remember winter cold, and at times they are basically the same temperature, and the clashes are nonexistent.

The results are the unexciting maps we are witnessing.  (Dullsville, man, dullsville). 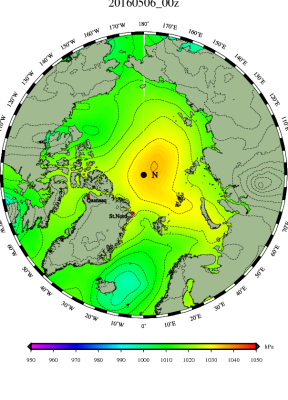 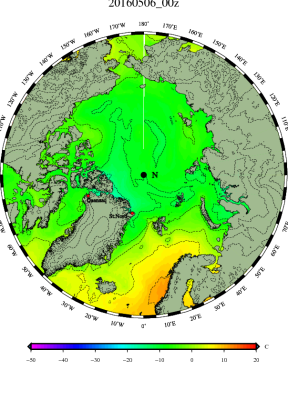 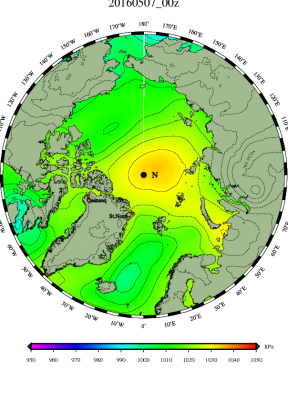 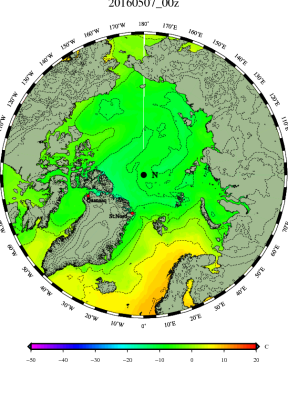 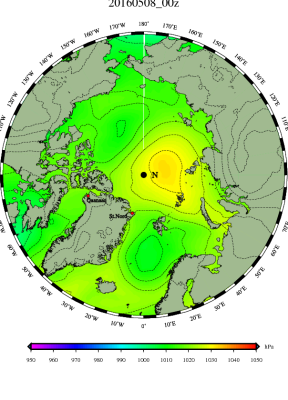 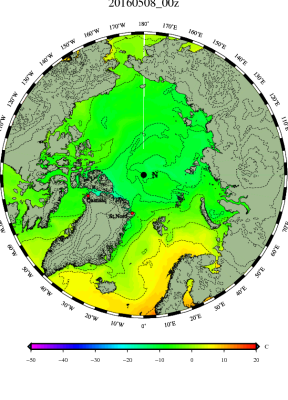 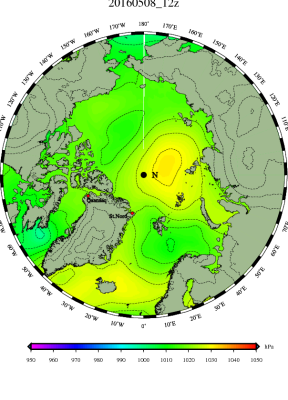 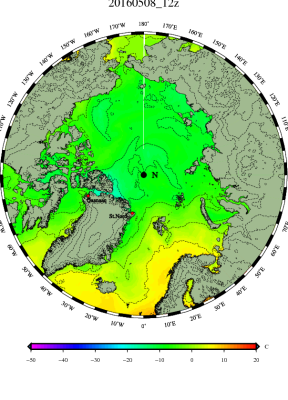 This is as close as we have seen to a textbook “zonal” pattern in a long time. I may have to look about in the shrubbery for that textbook I threw out the window, for having a high pressure sit on the Pole obeys the textbook idea of the “Polar Cell”, with air descending at the Pole, and storms wheeling about the periphery, pumping the air aloft that comes down at the Pole.

An interesting side effect of this kinder and gentler pattern is that currently there are no above-freezing temperatures at the Pole. Dullsville can’t do that, until June. When else can it thaw besides the midsummer? Ironically it took the the coldest temperatures of the entire winter to derange things into a non-zonal and “meridienal” state, and suck a brief plume of above-freezing temperatures north, last Christmas. In fact it took temperatures so cold it was the only time they dipped “below normal” in El Nino winter (north of 80 degrees), to suck the plume of brief “warmth” north. (The extreme cold shows as a couple dips below the “green line”, just before temperatures spiked at the end of the year, in the graph below.) 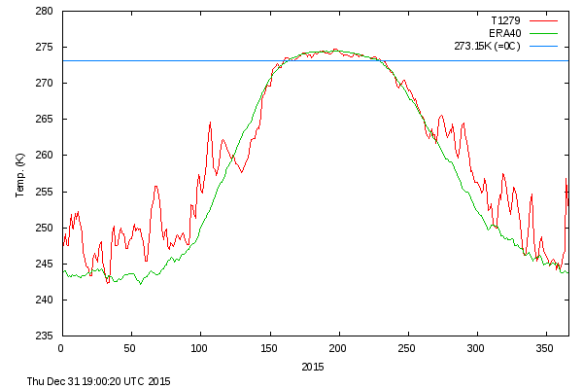 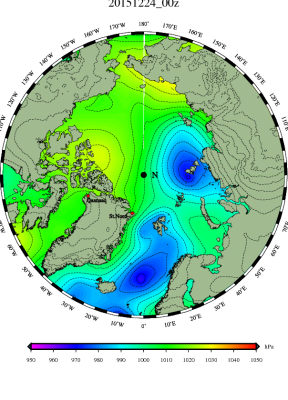 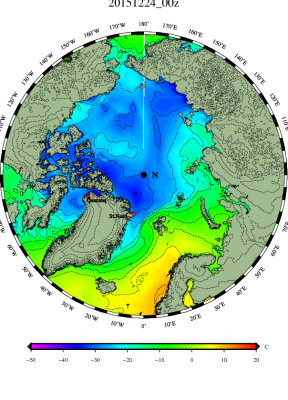 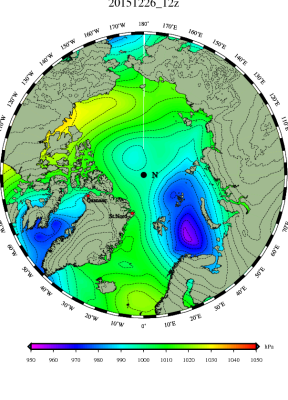 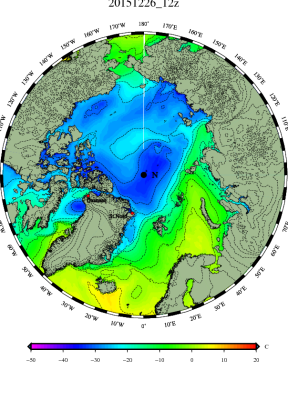 It sure wasn’t Dullsville, back then! Huge storms were roaring perilously close to the Pole! These gales flung Atlantic air right over the Pole, (and you can still see the remnant “warmth” (in fact below freezing by the 26th) to the Pacific side of the Pole, in the second map).

At the time Alarmists were dancing in the streets, because temperatures may have nudged above freezing, if not on the Pole itself, then at a buoy very close to the Pole. It was an event worth Washington Post headlines. More quietly, under the froth of headlines, a scientist named Wendy gathered solid data and shared it with us here:

Let’s face it, the dull stuff, which is what scientists must drudge through most if the time, doesn’t make headlines. The media wants every day to be Christmas, when we can skip the hard work of recording maps, and temperatures, and just be enthusiastic. Yippee! Yahoo! Like a cowboy in town on a bender. Not like the cowboy riding and herding cattle day after day in the driving sleet and parching dust. However if that cowboy didn’t ride the range through all that sleet and dust, we’d have no beef on our table, and he’d have no time on the town going yippie-yahoo. In like manner, scientists could never lift their index fingers and utter their flabbergasting revelations if it were not for long times spent in the tedium and drudgery of Dullsville.

And Dullsville is where we are at, right now, as we attempt to be informed voters, and watch the sea-ice, in order to separate the science from the sensationalism.

Usually this time of year is always fairly dull, but also we get our best views of the sea-ice now, and can use the images to play Sherlock Holmes and deduce what happened when darkness hid all last winter.  We get our pictures from cameras on buoys, and from cameras held by adventurers on the ice, as it is now that adventurers dare go out on the ice because the sun is brightest and the ice is firmest. However something odd has happened the past few years. The cameras on buoys have all vanished, except for O-buoy 14’s. Also the adventurers have quit their adventuring, as few fund them, (and/or fund the air support they require). This makes the dull time waiting for the ice to start thawing even duller, because we don’t even get any pictures, and can’t even argue about what the pictures show.

I confess I have a suspicious side. I would call it a paranoid side, but unfortunately my suspicions have too often proved true.  However, before I go into my suspicions, I should simply report the facts, and show O-buoy 14 shows a dull waste of white, without the thaw starting. 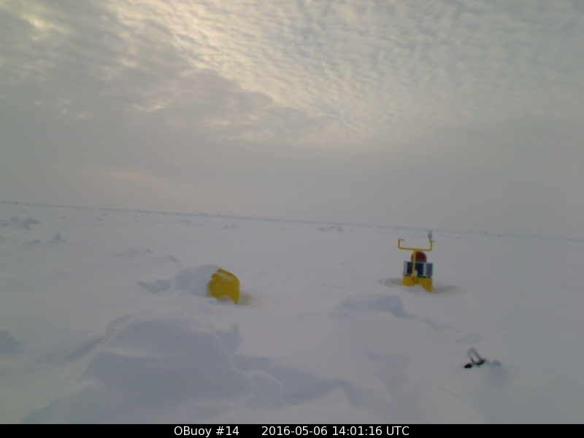 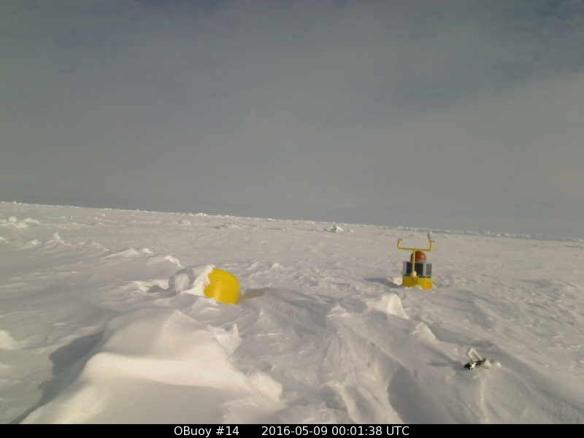 And that is all I can post. Some unnamed person cut the funding, so I can’t post any pictures for the “North Pole Camera” this year. Nor does it seem that anyone found the funds to place cameras beside Mass balance Buoys, north of Alaska, this spring. Where has all the money gone? It makes me suspicious.

I also find it suspicious we have lost all but one of the Mass Balance Buoys, and also O-buoys 8b, 13 and 15.  Why? Because I think the wiser Arctic-Sea-Ice scientists would not have placed the buoys in foolish places where they would obviously be prone to being destroyed. (In one place the ice broke up only hours after the camera was placed). Whether the buoys were instead placed by a know-nothing political appointment who was too stupid to chose the better places, or were placed by a devious manipulator who intended for them to fail, (perhaps because higher-ups disapprove of eyewitnesses seeing the ice isn’t melting away as expected), the fact remains they are all gone, and rather than having buoys increase our knowledge, we are now left in the dark. (We do have some satellite views, but the buoys often proved “modeled” satellite data was incomplete and inaccurate, and even non-modeled visual satellite pictures were from too far away to capture important details.)

I would rather rely on facts than suspicions, but I am denied the facts. I am reduced to a view not much better than midwinter darkness, and a level not much higher than the media’s, and the media cared more for sensationalism than facts right from the start.

Therefore you must forgive me for creating a media-like sensationalism of my own, without facts. It is tantamount to this suspicion:

Some people are dependent on a sensationalist illusion, which suggests the sea-ice is melting away. They are paid for promoting the hoop-la about a polar “Death Spiral” that hasn’t occurred. They therefore dislike the cameras and buoys and adventurers they formerly funded, for such buoys, cameras, and people are not supporting their sensationalism that the Pole is in a Death Spiral. They see old friends as foes. In fact they may dislike even an Alarmist website like the notorious “Nevin’s”. Why? Because even “Nevin” likes to use actual data and actual pictures from actual cameras as he, with his filter of bias, sees what he wants to see. Why dislike “Nevin”?  Because even as an Alarmist his honesty grates against the sensationalist meme that the ice is melting away, and he is too honest about the fact the ice isn’t gone, even as he assures everyone it will be, it will be, it will be, tomorrow, tomorrow, tomorrow.

The American voters are seeming to riot as a rabble against the demure assurances of “insiders”, preferring a Trump to the “insider” Bush, and a Sanders to the “insider” Clinton (and even to be pissed off at the current president, because such voters only voted for the president because they “hoped for a change” but instead got an even greater dose of “more of the same”.)

The “consensus” sensationalist illusion can not stand up to the hard Truth of reality, in all areas, including the obscure subject of arctic sea-ice.  The writing is on the wall. The “insiders” think they are the “consensus”, but the Majority know the word “consensus” means “insiders”, and doesn’t include the Majority that is increasingly fed up, to a degree where grumbling is becoming a growl.

My final suspicion is this: Some can see the writing on the wall, and know it is time to take the money and run. If they take the money for themselves and run, then real scientists suffer from a lack of funding, and buoys and satellites break down, which is what we are seeing.

However I confess that is mere suspicion, on my part. I would be glad to see it is paranoia, but I doubt it is.  The blatant hypocrisy of those who have used immortal beauty as a thin veneer over mortal lusts has been so absurdly and clearly obvious for so long it has become laughable, and the practitioners are swiftly becoming jokes. Already their rats are deserting their ships.

On the other hand it may be that the buoys and cameras and satellites are failing for some other, logical reason. I can’t explain the satellites, but the sea-ice is not as smooth as it used to be. Maybe it is getting crumpled up, compressed like an accordion, and destroying Mass Balance Buoys and Cameras as it increasingly buckles and bulges.

If this is the case, the resultant thickening ice is not the same as ice thinning, melting away, and leading to an ice-free Pole and a “Death Spiral”. In such a case both Skeptics like myself and Alarmists like “Nevin” would like to discuss what the evidence of thickening sea-ice means. Yet it is hard to do so when some unnamed person somewhere in Washington fails to maintain (or even fund),  buoys, cameras, and even satellites.

Dullsville may not turn out to be so dull after all.