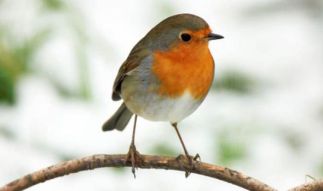 The first robin of spring is the subject of many poems and much folk lore, but is also the source of great misunderstanding between Europeans and  Americans, because we are talking about two totally different birds. One always needs to be careful, when dealing with symbols. After all, one man’s spider is a blood-sucking trapper, and is another man’s stringer of cobwebbed dewdrops at dawn.

The European’s fondness for robins may be due to the fact the little, pert birds like to hop about investigating the soil just behind a plow, and they are unafraid of humans and easy to tame. Before Christ they were said to be a favorite of the god Thor, and after Christ they were said to have been stained by Christ’s blood when they flew up to try to comfort Him on the cross, singing in His ear. That red breast was also said to be made redder because they took pity on souls in purgatory, and brought them water, and were burned by the fires.

American Robins don’t seem to have the same history and symbolic lore, but I refuse to get all competitive about it. I’ll merely mention our robins are twice as big, and can kick European robin’s butts any day.  Ours are edible, though we’ve become politically correct, (if not poetic), and not many people hunt them any more. Also European robins lay ugly brown eggs, while ours lay eggs of a beautiful sky  blue. Their robins are squeaky flycatchers, while ours are melodious thrushes, and John Keats never wrote poems about flycatchers. (What rhymes with flycatchers?) But I only mention this as scientific fact.

Anyway, our robins are back, and it is a great relief to me and a friend of mine, as we had noticed a scarcity. Usually a gang or two of American robins hang about all winter, usually in the swamps. They are so dull-looking that some once thought they were a separate species, and dubbed them “wood robins.” However they are just less dandied-up during the winter than they are when attempting to woo each other in the spring. (Just like humans.) They are also less polite. There is something about a gang of winter robins that hints at the mentality of a mob. However there were none to be seen last winter, despite the fact the winter was mild.

I figured that they had learned not to hang around after the previous winter, which was particularly brutal around here. I saw them in the swamps that winter, but not last winter. It makes no sense that a bird would hang around the north when the winter was bitter, and head south when it was mild. So I figured they decided they didn’t want to take the chance, and had headed south before winter even began. They all vanished during the final days of August

Some say birds can’t learn in this manner. They say birds follow “patterned behavior” and “imprint”. An example is that, when whooping cranes are raised by sandhill cranes (because the second egg of a whooping crane nest was placed in a sandhill nest, in an attempt to increase the population),  the young whoopers “imprinted” on sandhill parents, and became so convinced they were in fact sandhill cranes that they refused to mate with other whooping cranes.

I assert our robins are not so dumb as that, and it will be difficult to prove me wrong. (It is best to chose the high ground, if you decide to start a fight.) Others may assert there were no robins around this winter because the stay-north robins all froze, the prior winter. I just demand that they produce the corpses. They can’t, so I win.

However I was concerned by the lack of robins this spring, especially as both winter-robins, and the children at our farm-childcare, have a love of the withered apples on a crab apple in our pasture. The children, who will not touch good food prepared by loving mothers, like the apples because they are sour three degrees beyond inedible, and later, when they are too brown to eat, children like them because it is forbidden to pelt each other with them, and children are not known for always honoring rules. 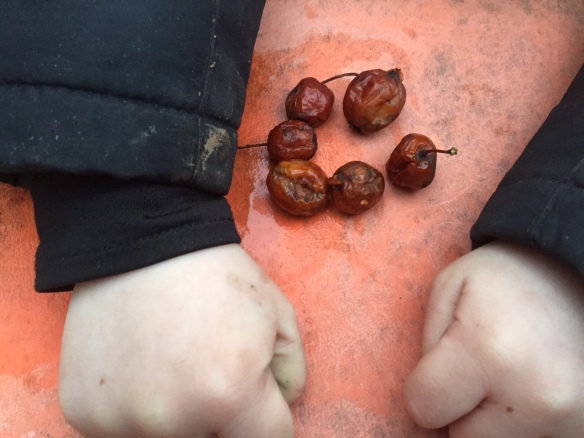 These crab apples are so amazingly sour that no bird will touch them all winter, even when snows are deep and famine makes foxes unfriendly. (Maybe they get sweeter after a winter’s worth of frost; I’ve never tried them once they turn brown.) Then, during the last week of March or first week of April, the robins descend.

The gang of robins is more like the Hell’s Angels than anything remotely poetic. For one thing, they don’t sound like thrushes, and just do a quick, clear chirp, their “alarm call”. For another thing, though no other bird has expressed the slightest interest in rotten apples, they chase other birds away. How the heck am I to write a “first robin of spring” poem about such unseemly behavior?  Consequentially, I never have.

I intend to make up for this shortcoming on my part, for, when I think of it, even among humans, spring is not noted as a season of good behavior.

This year, because I hadn’t seen a winter-robin all winter, I suddenly realized that this rowdy gang of birds was indeed a sign of spring, and, along with my friend, I worried about the chance something terrible had happened. As is often the case with worry, it was a waste of time, for yesterday a couple robins appeared, and today the entire gang descended.

During the summer robins are spread out, and chase each other from each others territories, so you seldom see more than two birds on a lawn. But today they were everywhere you looked. The pasture seemed covered with them, though I suppose there were only fifty at most, hopping here and flying there and chirping that alarm-call all over the place.

One slightly poetic thing they do, for no reason I can fathom, is to sometimes allow a few bluebirds to join their gang. It is likely sheer racism, as bluebirds are also thrushes. I hopefully looked about today, seeking a bluebird, because it is a heck of a lot easier to write a poem about a bluebird, than a pack of unruly robins. However there wasn’t a bluebird in sight.

The crab apple tree is partially hidden by by the white object in the upper left of the picture above. That useless white object was erected for a wedding, and now sits there and gets in the way of my mowing, and makes people wonder if I’m some sort of Zen Buddhist. I’m not, nor are the first robins of spring.

They are in that crab apple tree and glutting themselves on the rotten fruit. I tried to take a picture, but few wildlife photographers run a Farm-childcare, and have a bunch of kids tagging along. Not that I want the kids to tag along, but small children have an amazing ability to see when adults are up to something interesting.

If I silently raised my camera to take a picture of a rare and endangered species, a child would bellow from far away, before I could frame and focus, “Whacha takin’ a pick-shoor uv?” Nor can I even get that far. Long before I even get close to the rare and endangered species, the children can tell, just by the way I’m walking, that there is something wonderful that they, (simply because they want to see it, and yell so loudly that they want to see it), will never see.

Unless…unless…I figure out a way to show them.

(As an aside, amazingly, we found a way to let small children see baby foxes outside their mother’s den, a couple of springs ago.   Even more amazingly, my amazing wife even got some pictures:

However there are times my wife’s brilliance seems to be the exception to the rule. The rule would be that if you want to take pictures of a landscape devoid of wildlife, run a Childcare.  And if you want to have photographic proof that robins never, never gorge themselves on rotton crab apples, walk in my shoes. I couldn’t get within fifty yards of that tree before the loud children scared the entire flock of robins, all chirping their loud alarm-calls, to the far side of the pasture.

So you can forget photographic evidence. You are going to have to trust me on this. There were a lot of greedy robins in that tree.

This brings me around to the conclusion that my mother didn’t raise me to be a wildlife photographer. She liked books, and I can only suppose she raised me to use something you are stuck with, when the camera doesn’t work:  Words.

I’d rather use a camera. A good picture of rowdy robins in a crab apple tree would be worth a thousand words. But it looks like I’m stuck with words, and must somehow compose a sonnet about how biker birds are a sign of sensitive spring.

(If there is a blank place below, it means I gave up.)

I don’t see what is so spring-like about
Robins. They arrive like a biker gang,
Chase winter birdsong away, and just shout
Their short, “Chirp! Chirp!” alarm-call. Give me the twang
And trill of red-winged blackbirds in the reeds
And I can thrill of spring. But these robins
Just bully about, and I have my needs:
My weepin’s; my wailin’s; and my sobbin’s.
Robins don’t understand poets like me.
They grub worms; then, worse than Adam and Eve,
They crab apples. So, unspiritually,
I hate them, and feel they only deceive…
…But then, after apples, they make poets blush
For they launch to treetops and sing like a thrush.

2 thoughts on “LOCAL VIEW –The arrival of Robins–”