I have pretty much avoided the topic of polar bears, in my discussions about arctic sea ice, because right from the start I saw them as a sort of media icon, even a false god, and simply didn’t think they had much to do with the weather at the North Pole. And they don’t. When I’ve mentioned polar bears it is primarily because they are opportunistic feeders, and when scientists place the cameras and buoys I like so much out on the sea-ice, such scientists run the risk of becoming a bear’s snack. So actually it is only to emphasize the guts of those scientists that I bring up the topic of bears.

Bears do mess up my observations. Initially they just tracked up the snow, adding a new variable to the plethora of variables that influence the melt. I was even tempted to call their footprints “unnatural”, back on October 15, 2012.

And if that wasn’t bad enough, sometimes they got in the way of my viewing the ice.

And another time they not only left tracks, but some sort of booger on the camera lens, 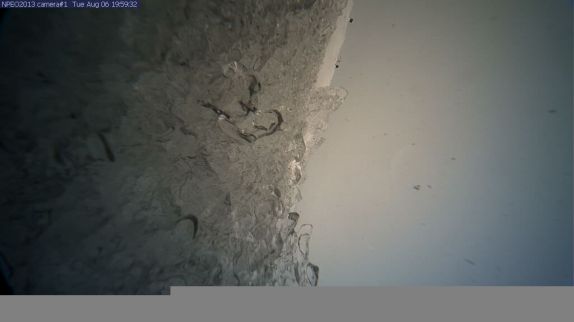 And therefore it should be obvious that, as much as I might like to avoid the entire subject of bears, they refuse to be ignored.

Not that the media will let you ignore them. Bears seem part of their plan to get people behaving in a manner they think is politically correct, concerning the topic of Global Warming.

Bears are sort of cute, when viewed from afar, and if you can touch a person’s heart by showing a cute bear stranded on a dwindling iceberg, and suggest the cute bears are facing extinction due to the callous use of fossil fuels, then you don’t have to bother prove the ice is actually dwindling. The sentimental suckers are sobbing, and having so much fun blubbering and blowing phlegm into Kleenex, that science comes second.

Of course seals are also cute. Some might even argue they are cuter. And it just so happens that polar bears lurk by the holes in the sea-ice where seals surface to breathe, and brain them with a single swipe of a massive paw, and hook the unconscious seal up onto the ice with their huge claws, and then proceed to get their white fur red, gorging on the seal. But the media doesn’t show those pictures, because it fails to further the “cause”,  which is dependent on bears being “cute”.

People who live in the north are under no illusions about how bears get so fat in the spring, and how many seals they eat, and how bears also might eat a neighbor, if the opportunity arose. However Northerners are not in a hurry to tell tourists who come north to see bears that the bears aren’t so cute, or to scorn the media’s “cause”. After all, “the customer is always correct”, and you don’t want to offend the tourists. You need to quell the urge to roll your eyes, and instead nod and look sympathetic, as tourists speak blathering nonsense.

In like manner, scientists also don’t want to offend the customer, who is forking out the money that allows them to tramp about the arctic rather than working a Real Job at a Burger King. Some scientists have even taken it a step further, and do more than nod sympathetically. They produce ridiculous “studies” that further the “cause”.

For example, most bears are complete gluttons, when it comes to chowing down on cute seals, and by the time the ice melts away and they come ashore they are downright pudgy.

However that will not alarm the public.  It is better to find some elderly bear, who has trouble hunting and who is often robbed by young, punk bears, when he does catch a seal.

This bear is not scrawny due to Global Warming. He is old, and guess what? When we get old we die. It may not be cute, but it happens to every human, and also to bears.

However if you are a scientist in need of funding, it may keep you alive a bit longer if you can make up some sort if link between old bears being skinny and fossil fuels. It will please the customer by supporting the “cause”.

Now it just so happens that a bear, waiting by a hole in the ice for a seal, may see a porpoise pop up, because porpoises are occasionally trapped by shifting ice into small areas they cannot escape, as escape would involve travelling too far under water without breathing. And, as I said earlier, bears are opportunistic feeders, especially if they are old and hungry. They do not become fussy, and say, “Sorry, I don’t eat porpoises.” They go ker-slam with a giant paw, and hook the flesh from the water. 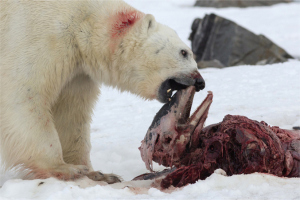 Now, scientists are also opportunistic feeders, when it comes to linking everything under the sun to Global Warming, and therefore there will eventually be a headline in the Washington Post, “Thanks Global Warming; Now Polar Bears Are Eating Dolphins.”

Of course, it helps if you can get a picture of an elderly, skinny bear by a porpoise carcass. 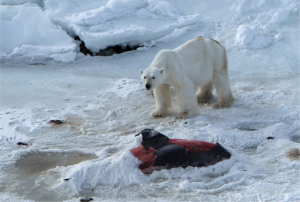 Perhaps it should be mentioned at this point (because the media won’t) that polar bears are at the top of the food chain, and therefore don’t die because of another animal, unless a man hunts them. So what do they die of?  What is the death-by-natural-causes for a polar bear?  It is starvation. Not cute, but a fundamental fact every polar bear scientist knows. Also a good many people who live in the north know it as well.

Therefore, when a scientist goes off the deep end and throws his integrity to the wind, producing a “study” that suggests old bears are starving due to Global Warming, all the other scientists know he has sold his soul. All the local people know he has sold his soul. And, even when they don’t want to offend the customer, or disrupt the gravy-train of funds for the “cause”, a sort of contempt leaks into the banter one hears, if one frequents arctic sites seeking information about sea-ice, as I do.

Perhaps people do recognize the difference between fiction for a “cause”, and truth. Perhaps there is even hope for the human race. For I keep seeing signs that the fiction created for the “cause” has passed some sort of limit, and credulity has been stressed beyond its bounds, and people can’t help themselves. They have started to burst out laughing.

Another example involves mother bears, and where they chose to have their cubs, which are definitely cute.

It turns out that a mother bear requires a solid foundation of sea-ice upon which to dig her den, within which she gives birth to her cubs and nurses them until they are big and strong enough to follow her about. Mother bears will not stand for shoddy ice, and if conditions are not suitable along the coast of Svalbard, they will head several hundred miles in seek of the proper ice, and perhaps build a den along the coast of Franz Josef Land. Then, if conditions improve by Svalbard the following year, they will head back.

However such simple truth does not feed the cravings of the “cause”. The “cause” demands a tragic tale of no baby bears being born on Svalbard one year, and a pointing finger jabbing at nasty, nasty fossil fuels as the culprit.  However who will be the scientist who will utter such nonsense?

You need someone to make a Jon Aars of themselves, who will prove his compassion with a touchingly tender picture of compassion for a baby bear. 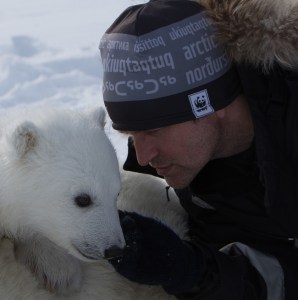 Ordinarily such nuzzling of a baby polar bear would be a quick way to get yourself killed. Where is the mother bear? Oh, I get it. She is laying drugged on the ice.

In any case, when the mother bears came back to Svalbard this year, Jon Aars had the decency to report the facts. Never mind that he got a lot of mileage, and caused all sorts of sobbing and a great increase in the consumption of Kleenex, a year earlier.

However the people who live up there do notice.  And they do care about their bears, even if it is only to usher a bear out of town. 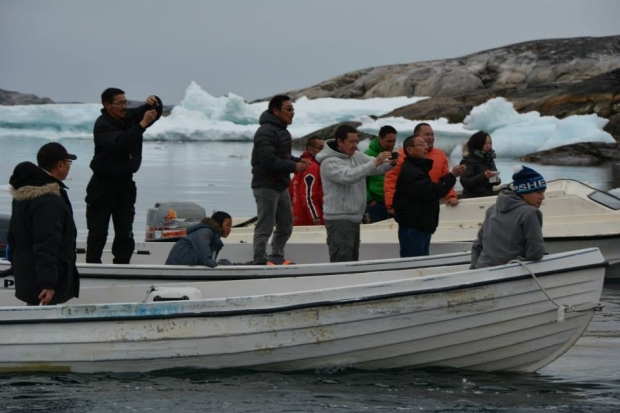 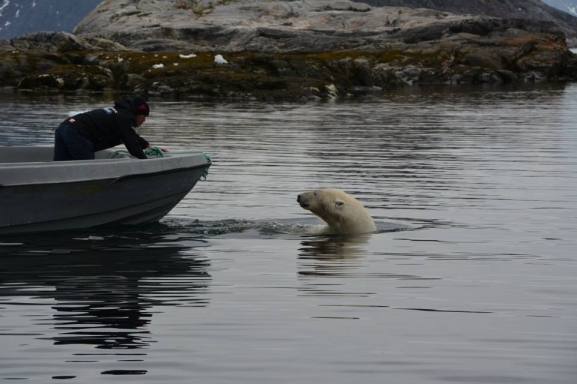 Such people know their own children are much cuter than polar bears.  When it comes to the “cause”, their children come first.

However the most delicious irony I chanced upon was in an article from up in Svalbard, where they were thrilled to have a mother bear raising rare triplets.  The local people were worrying about whether snowmobiles might upset the mother bear. During the discussion, the reporter produced the following wonderful observations

“Experience for example from Tempelfjord in 2013 shows that polar bears, including families with young offspring, do not necessarily suffer from frequent traffic. In that spring, a mother with 2 first year cubs spent several months in Tempelfjord, which was frequently visited by large numbers of groups. Respectful behaviour contributed to the well-being of the bear family, which was generally not visibly affected by traffic, but seemed to enjoy a good and healthy period, with regular hunting success.

Unfortunately, both cubs from 2013 are most likely dead by now. One died in Billefjord a short time after tranquilization for scientific reasons. There is no evidence for the tranquilization being the cause of the death, but the assumption is not far away.

The second one of those 2 cubs was most likely the one that was shot near Fredheim in late March 2015 by tourists in their camp. The bear had injured one person in a tent and was then injured with several bullets from a revolver. It was later shot by the police.

These observations indicate that a larger number of well-controlled tourists, with respectful behaviour, is less of a problem than a smaller number of visitors (including scientists) with more unusual activities, involving a higher risk. An interesting impression, as the public reception of tourists is generally much worse than that of scientists.”

In conclusion, I have decided that back when I avoided the topic of polar bears, I had no idea of all the fun I was missing.

A wonderful site, if you are interested in the topic of polar bears, and reality versus the “cause”, is:  http://polarbearscience.com/