I am up with insomnia at three in the morning, grabbing the chance to type a brief post about all the local excitement about the chance of more snow.

The map shows a double barreled storm sliding east, with an Alberta Clipper center to the north and a sort of Rocky Mountain low center to its south.  The southern low holds some milder air.  Ordinarily it isn’t usually warmer in Minnesota than New Hampshire,  in January, however currently it is 34° (+1.1° Celsius) in Hutchinson (just west of Minneapolis) and -3.5° ( -19.7° Celsius) here. Tuesday’s blizzard, now weakening just north of Nova Scotia, has brought down some arctic air, and over fresh snow temperatures are plummitting lower than expected.

Ordinarily I would hope this mildness might make it east, and we might even get rain.(In the winter of 1978 the first blizzard was followed by a warm, windy rain as the second blizzard moved north over the Great Lakes, and then a third blizzard hit the east coast.) However last night it seemed the cold air would be slow to be budged from over us,  and we might get an inch. Everyone was looking ahead to a following storm coming north from Texas on Sunday, and talking about a possible foot of snow then.

Now I check our local forecast, and see this first storm is suppose to give us 4-6 inches. I can hardly wait to hear the snow gossip this morning. It is likely to be an uproar.

I will try to update this post later, with details of the uproar, but I have to attend a meeting today that involves delicate diplomacy, which is something I am not very good at. I’m much better at uproars. So I fear my mind will be occupied until the evening.

As if I didn’t have enough to do, there was a coincidental miss-match of sick employees and over-booked family members, and I was the only one with time even remotely “free”, and I had to do nothing for five hours. Or, well, watching a one-year-old granddaughter isn’t exactly nothing, but you can get nothing done. I had various papers laid out on a table, upstairs at the Childcare, but couldn’t focus on that sort of work for five seconds. If I tried the toddler would go wobbling off at amazing speed towards some life-threatening curiosity. There are so many interesting things to investigate when you are first up and about: Electrical sockets and cords, the area under the sink full of caustic cleansers, the burning hot side of a wood stove, steep back staircases.  I was reduced to trailing her constantly, like some sort of hawk up above, trailing a stampede of small elephants.

It’s amazing what you can do when you have to, but I’m getting too old for this nonsense. For the life of me I don’t see how young mothers manage, especially when they have not one, but two or three. How can they find time to feed anyone? If I was a Mom the family would starve.

I did have the weather radio clicked on in the background, and listened as various watches and warnings bleeped into existence. It was completely confusing to the general public, as they needed around four forecasts for the general vicinity. A storm looks likely to blow up as it moves off the coast, so areas not far to our northeast could get a foot, while areas to our south and west get an inch or two. 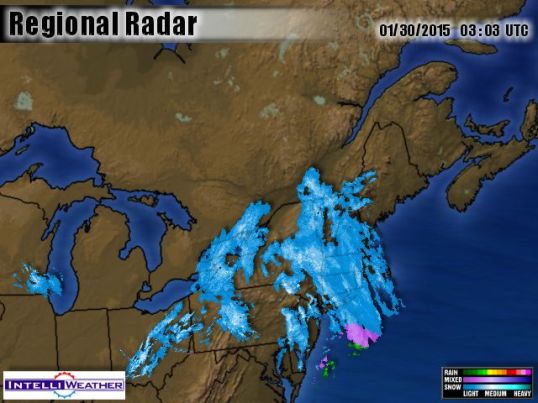 The radar shows snow over us, but it isn’t reaching the ground yet. As the storm brews up over the Atlantic it looks likely to howl and whatever snow we do have will be whipped about. The say it will become bitterly colder, but for the moment it is calm and just below freezing, which seems mild to my winterized metabolism.

At the meeting (which went better than I expected) every person had a different idea of what the weather was going to be. That is what you get when the weather bureau issues four different forecasts for a distance you can cross in an hour-long-commute. And, considering the long-range forecast had everyone in a tizzy to to begin with, the storm-gossip gets completely out-of-hand when gets going four ways at once. I’ll deal with it in the morning.