This is a quick insomnia report, to show maps of the storm #5’s development, and also to express amazement that anyone would have the sheer audacity to forecast snow, when it only got down to 39 last night (as of 4:00 AM) and is still 46 in Boston.  In fact it is only recently that the radar started to show snow at the northwest edge of the rain.

If I was a suspicious fellow, I might suspect the fellows over at the weather bureau were pulling our legs.  After all, it likely gets boring looking at isobars all the time. Maybe they decided to cause general panic and hysteria throughout the east coast just for the fun of it, and now are sniggering up their sleeves.  It wouldn’t be the first time.

Storm is deepening over South Carolina. Watch to see if the following second low over Florida persists. A strung-out storm is weaker.

Temperature here has dropped 4 degrees to 36 in 4 hours. Alto stratus with some high scud indicating falling rain, from west. Radar shows rain here, but it isn’t reaching the ground. Pressure in Manchester 30.19 Hg and falling. In Jaffrey 30.16 Hg.

The first flakes started falling at 8:30 AM. There was no rain.  I went and picked some wild cranberries with one of the older boys.  The bright berries contrasted nicely with the purple-green foliage and the white snow.  Then we dug the final row of potatoes, plus some scattered onions and carrots that remained, from the frozen and then re-thawed soil, which was very muddy. I wore yellow raingear which soon was covered with briwn slush.

In the yard a boy built a snowman as the snow swiftly mounted up to over two inches. The snowman was a bit muddy as well. Parents came early to pick up their kids. Now only a single child remains.

I’ve saved the maps but can’t access them at the moment. Nor can I post this, so why am I writing?  Life is such a mystery at times!

At least we still have power, though the lights keep blinking. The snow is so sticky that all the electrical wires look as thick as a man’s thigh, like long white noodles.

My last outdoor job was to snow-blow the Childcare drive so the last,  lone child and single member of the staff could leave. We had around five inches then, at 5:00, and have aound seven now, at 7:00.  The drive home was a creeping crawl. Coming down the steep hill into town I saw a policeman pushing a car with spinning tires up the hill, well away from his cruiser and its flashing blue lights.  You don’t see that every day.

Now I’m home and there are very few things that could pry me from my chair and out the door again.

We received a total of a foot, tapering off to light snow by midnight. Winds remained fairly light and the pressure never got below 29.85. Temperatures remained mild, and this morning it is at 34 in Manchester to our east and 28 in Jaffrey to our west. The snow was very sticky, and all the trees are burdened and stooped, especially the evergreens, which barely show any green at all, and resemble big blobs of white. Everwhites, perhaps, or that is what they will be until the wind picks up.

I’ve been out shoveling this morning, to prove to my sons that the old man is tougher than he appears, and to make them feel guilty for sleeping late.  The snow was fairly light until I got to the pile the plow made by the road. Then I spent a lot of time leaning on my shovel, except for a brief time shoveling vigorously because a car was passing, and I wanted to keep my reputation.  I used to have the reputation of being “hale”,  but now I think I’m called “spry.”  I’m not sure I like the demotion.

I’m not sure when we got our internet connection back. One of my sons rebooted the computer, and there it was.  I went to look at my favorite blogs, and at Weatherbell saw Joseph D’Aleo claim places had two feet of snow. We usually get the most, because we face the east in these hills, and I doubted very much that Flatlanders down in the cities could get two feet, when we only got a fluffy foot that settled to ten inches by morning.  I thought this might be one of those rare occasions where I’m right and Mr. D’Aleo is wrong, but then I’ll be darned if he didn’t go and offer photographic proof: 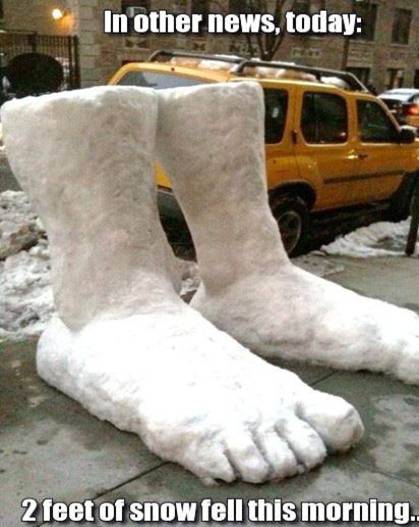 In Canada that would be “61 cm of snow fell this morning,” and the joke would make no sense. Nor do we make sense for celebrating Thanksgiving five weeks too late.

Be that as it may, thanks for visiting and HAPPY THANKSGIVING EVERYONE!

Oh, I nearly forgot the Afterward maps: (Note the new lake-effect snows, and the small storm being whisked south of us.) 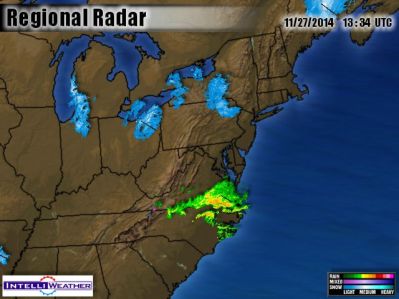