I’m starting the week with up-at-1:00 -AM insomnia.  I might as well check out some maps.

It is still too early for the latest computer models, but the most recent runs continue to fuel the frenzy about a Thanksgiving storm. The GFS has now pulled the storm in closer to the coast.  Here’s the Dr Ryan Maue map from the Weatherbell site, of the GFS forecast for Thanksgiving Eve. (Wednesday night):

(The above map should alert European viewers to the difference in pressures of gales at lower latitudes, when they note the storm is barely below 1000 mb.)

Even the Canadian JEM model is starting to pull the storm closer to the coast, but it seems to now weaken it by having it be two ripples on the front rather than a single gale. I’ve actually seen this happen to a system the media is making a hoopla about.  Everyone is wild-eyed, and the reporters are down on the beaches all ready to report “live shots” of crashing surf and howling winds and smothering snow, and they look ridiculous because there is just a gentle breeze, a few ripples, and a single, wandering snowflake.

The other thing that turns looming storms into jokes is the slight flattening of steering currents that will whisk a storm out to sea. I remember the sheer agony this would cause me as a boy, when I hadn’t done my math homework, and Virginia would get over a foot and up here we’d only get gray skies. The only thing worse was to have a storm veer inland, and change snow to rain.

The devil is in the details. In many ways a forecaster is like a gambler studying the horses, and betting on the odds.  There are countless factors that can throw a forecast off, and what amazes me (besides the fact they even attempt to predict the behavior of chaos) is that they can see a snowstorm when the entire east of the USA is warm and the storm doesn’t even exist.  Joseph D’Aleo admits there are still many possible outcomes, and uses the headline, “Whopper or Wimp?” while Joe Bastardi (so far) has had the good sense to avoid the devilish details, and instead to bask in the glory of having seen this threat coming over a week ago.

Weather geeks are a most merciless group.  Years ago Mr. Bastardi saw a threat in a hurricane when it was way over by Africa, and used the headline, “Houston, We Have A Problem,” and a week later the weather geeks were taking him to task because the storm (Rita?) hit Houston’s suburbs and not downtown. Therefore I wouldn’t blame him one bit if he remains in the safety of the long term, and avoids the specifics of the short term’s devilish details. (Of course, because he loves competition, he’ll be tempted to stick his neck out as the geeks sharpen their axes.)

The thing that amazes me is the fact he saw the threat a week ago.  He calls it “pattern recognition,” but to me it is mysterious, for to me the future that far out is all vapors of worry, and unreal creations of my mind.  The current map looks far too mild to imagine a snowstorm in three days.

I guess we’ll call this mild storm storm #4, though it can’t count as a winter storm.  Yesterday saw it form between an Alberta clipper on the northern branch and a stalled low left behind by a cold front, down in the southern branch’s territory. A large area of rain appeared where none had existed. (Images can be clicked, or openned to a new tab, for larger and clearer views.)

The maps from this morning’s wee hours shows #4 continuing to mill about out there.  The first cold front, down in Texas, only holds Chinook-warmed Pacific air behind it, but that second cold front, cutting through Iowa and Nebraska and then up to Montana, represents the arctic wolves, and some backlash snow is appearing on the radar behind it.

Storm #4 is expected to slide northeast through Quebec, between Hudson Bay and the St Lawrence Valley,  and then off Labrador, dragging those arctic wolves south and then east off the USA coast, but even in 48 hours there is little sign of a storm, unless you call the weak low pressure along the rain-front south of Florida a “storm.” 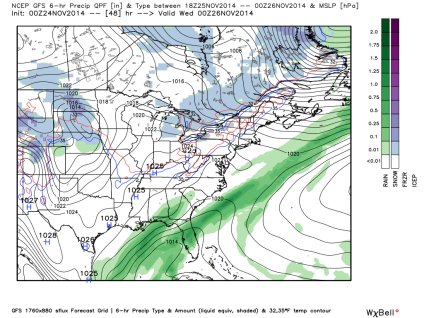 Even at the 48 hour point, 24 hours before the map that began this post, the storm is just vapors, both literally and in terms of imagination. All sorts of wrenches can be thrown into the works that change everything. For example, if you look back at the current maps you can see something brewing off the Carolina coast. That is just the sort of small detail a computer model might miss. If it grew larger than expected it could cause #4 to wobble, and just as a small pebble can cause a huge avalanche, cause-and-effect would lead to cause-and-effect, and the storm for Thanksgiving could vanish completely, except for the sheepish grins on the faces of forecasters, [except for Joe Bastardi’s, (because he only said a storm would be in the news this week, and didn’t give specific details.)]

In any case, though I don’t like to be ruled by the vapors of worry, I should get back to bed. I’ve got a lot to do before snow buries us. However…..I’m not tired. What can I do that will promote sleep?

Hmm. My poetry. It seems to work on everyone else.

VAPORS OF MY MIND

Peeking downwards from the verge
I tire of this edginess
And think I’ll turn away
From my constant fear
Of dying; of rejection; of exposure;
Of what happens anyway
Though I seek to disappear it
Though I cannot grasp or steer it
And it’s gone each time I near it.

Vapors of my mind I think
Are despots of asylum rooms
Which cultivate a thousand dooms
That window box as danger looms
And fight ferocious pansy blooms.

Tapers in my temple wink
An eye lashing of candlelight
And think it foolish that I fight
An escalator’s up-bound flight,
Dashing down with all my might.

Tired of this edginess
I think I’ll turn away
From what seems a sort of suicide
Made of mental, muddled pride.
Instead of flapping I will glide.
Who knows? I might enjoy the ride.